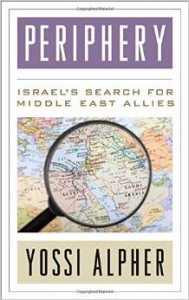 This is another in a series of reviews of new books on Middle Eastern affairs. We asked Dr. Gail Weigl, an APN volunteer and a professor of art history, to review Yossi Alpher's new book about Israel's relations with Middle Eastern peripheral states and groups.

The book thus is not a history in the classical sense, but a consummate insider’s comprehensive record and analysis of fluid “periphery doctrines” open to a variety of alternative understandings.  First conceived as a grand strategy by David Ben-Gurion in an ad hoc operation that only in retrospect emerged as a strategic initiative, the doctrine originated in the fact that Israel was surrounded by hostile states committed to its destruction, and focused on two primary objectives: marketing Israel to the European powers as a significant player in the Middle East, and strengthening the fledgling nation by facilitating Jewish emigration from the United States, Europe and Arab nations.

To those ends, intelligence and clandestine activities chiefly implemented by Mossad were directed initially toward forging alliances with non-Arab, non-Muslim states and ethnic minorities distant from the Arab-Israeli conflict, presumably willing to address Israel secretly and if necessary to fight a common enemy. A more inchoate rationale centered on humanitarian motives, identified with peoples who pre-dated Arabs in the region, and whose narrative therefore could support Israel’s narrative of ancient, pre-Arab Middle Eastern roots.

Having established the parameters of the doctrine, Alpher devotes the remainder of the book to a step-by-step discussion of the evolution and devolution of multiple strategies adapted to political and economic developments. Beginning with a discussion of the most far-reaching and comprehensive accomplishment of the periphery doctrine, an alliance with Iran and Turkey known as Trident, Alpher analyses the successes and failures of alliances often based in misunderstandings, wishful thinking, and Realpolitik.

Each chapter is conveniently divided into sections, apprising the reader of stages of negotiations, rationales, and outcomes. It is a completely unsentimental narrative, occasionally relieved by personal anecdotes, written without rhetorical flourishes in a sober style that belies the dramatic content, whether describing clandestine activities, unintended consequences, intelligence failures, successful outcomes or spectacular miscalculations.  Most fascinating is Alpher’s inside knowledge of operations, ranging from the cooperation of security apparatus to commercial links, from arms sales to the exploitation of anti-Semitic notions of Jewish world power so as to facilitate aliyah (Jewish immigration to Israel) and nation-building. There is much that is poignant, particularly the failure of Israeli players to recognize the degree to which they were being “played” by erstwhile allies.

The Lebanese Maronite tragedy is well known.  Less well-known, perhaps, is the failure of the Trident strategy, in part by refusing to recognize the lopsided nature of the alliance, how both Iran and Turkey exploited Israeli intelligence to their own ends, and abandoned the alliance once internal politics and the rise of Islam not only made Israel less useful, but more significantly, into a convenient enemy.  Misunderstanding or missing intelligence along with the failure to grasp the impact of Arab propaganda also crushed what Alpher sees as rather naïve hopes for permanent ties with Ethiopia and Morocco.  He offers many reasons for these failures. More often than not, these failures were due to Israel’s inability to comprehend and realistically calculate the force of internal political divisions and pressures, as well as to articulate strategic criteria for judging the efficacy of any alliance.

Efforts in some quarters were successful, especially those motivated by humanitarian motives based on ethnic struggle, when Israel forged alliances –sometimes in total ignorance—with Iraqi Kurds, Syrian and Lebanese Druze, and leaders in Yemen and southern Sudan.  These are among the most interesting narratives, in part because they demonstrate the melding of conflicting goals:  the desire on the one hand to aid struggling minorities in their quest for autonomy, while considering the benefits of such alliances to Israel’s long term goals in the region.  A number of alliances initiated by non-Arab, non-Muslim minorities were determined by their partial or complete control over territories, accessibility, readiness to fight a common enemy, cost and Israel’s strategic needs. Though in some cases successful and cost-effective, as in the role played by Kurdistan, South Sudan and Yemen in the Israeli-Egyptian 1978 peace accord, these alliances, with a few notable exceptions based on self interest, could prove a dangerous game.

As Alpher observes, some who practiced the periphery doctrine out of humanitarian motives prevented Israel from working both sides of an ethnic struggle, thus leaving her open to cynical manipulation, most egregiously by Lebanon’s Maronite Christians.  The chapter dealing with the Levant minorities is a revelation, disclosing a history that is strikingly relevant to understanding contemporary Middle Eastern events. Perhaps the best known example of miscalculations and failure to objectively assess internal political divisions and pressures, the Lebanese Maronite debacle was a tragedy waiting to happen. Often based on wishful thinking and always on security considerations that trumped any other calculation, the same failure to calculate internal political developments marked the demise of the Iranian alliance, despite the fact that both Iran and Israel benefited from commercial links, a cooperative security apparatus, and a joint interest in promoting the Kurdish cause. It was alliance such as these that initially supported the notion that Israel was not isolated in the region, that she had important allies, without acknowledging that she was at the mercy of circumstances well beyond her control or interests.

From the Realpolitik of helping Turkey counter Armenian influence in Washington, D.C., while failing to credit the potency of Arab propaganda and the potential damage of anti-Semitic beliefs in Jewish influence, to the failure to conceive or anticipate the overthrow of the governments of Iran and Ethiopia, Israel could not overcome unrealistic expectations and assessments of her erstwhile allies.  Too often the story is one of failure, and Alpher is to be commended for his lack of ideological rigidity or defensiveness in the service of a thorough analysis of the reasons for those failures. This is especially true of his chapter on “Israeli Skeptics,” where he mounts a sharp critique of the periphery doctrine, while effectively arguing that the doctrine at the same time should be understood as a successful attempt to fragment Arab unanimity, and never prevented secret collaboration with Arab countries. As a lead in to the final chapters, He introduces here the fact that Israel today confronts a very different hostile world, one that is no longer Arab, but Islamist; and one that while it may comprise part of the old periphery, is today geographically diffuse (92-93).

In “between Peripheries” Alpher surveys the end of Israel’s international isolation and economic prosperity in the 1980s and 90s, and the decisive Arab rejection of normalizing relations with Israel in response to its ongoing conflict with the Palestinians. Here he surveys the factors influencing current Arab hostility to Israel, including the failure by the mid-90s to show progress toward a two-state solution beyond the Oslo accords, Israeli political deadlock, and the instability of countries in the region. This chapter demonstrates one of the greatest strengths of the book: the comprehensive picture of tangled motives and miscalculations that marked the periphery strategy over the years.  It is a comprehensive history that demonstrates the range and scope of Alpher’s experience, his understanding of the operation and interaction of complex alternatives, and their relevance today.

One marvels at Alpher’s knowledge of the political considerations informing decisions and outcomes, whether focused on countries or clans, tribal or religious movements. Chapters dealing with the potential for a new periphery in response to the current challenge of Islamicists, or an “Islamic ring,” again illustrate a discriminating mind uninterested in speculation or wishful thinking—including a continuing “periphery nostalgia” for a return to mutually beneficial relations with Iran and Turkey. His interest, rather, is in observing, remembering and testing hypotheses against history and current realities. To that end, he examines both Israel’s failure to address and resolve the issue of Palestinian statehood, as well as whether Israel can form new strategic alliances that would support a regional identity.

If Israel wishes to cast herself as a regional player rather than a colonial enterprise, she must remain alert to the importance of intelligence, and to not privileging humanitarian impulses over Realpolitik. Ultimately, however, and despite Alpher’s caveat that this book is not about the Palestinian issue, the entire enterprise comes down to understanding that Israel’s search for allies in the Middle East, and beyond, is moot unless it can be instrumental in resolving the Israeli-Palestinian conflict and facilitating the creation of a Palestinian state. Only in this way, a way far more secure than any periphery policy, can Israel find accommodation with Arab and Islamic States. Anything less will result in a binational state with an Arab majority, and then Israel will simply be folded, without bullet or bomb, into the Arab world.