APN CEO Debra DeLee in the Jewish Journal: When the Knesset tries to muzzle free speech 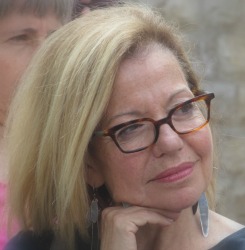 I am a product of the '60's. I demonstrated against the Viet Nam war, marched for civil rights and against racism. I have boycotted lettuce and grapes, in support of the United Farmworkers; Dow, for manufacturing napalm during the Viet Nam war; Coors, for discriminatory hiring practices against people of color and gays; Nestlé, for its aggressive campaign to sell breast milk substitute to young mothers in developing countries; Target, for its significant contributions to Tom Emmer, the rightwing candidate for Minnesota Governor whose agenda included positions I abhorred on everything; and Walmart, for its poor labor practices (except when my mother Ruth Epstein, who turns 100 this August, insists on going there “for the bargains”).

You get the picture. And while I don't support the boycott of Israel or Israeli-made products, I do support boycotting products made in settlements – and I urge others to do the same. In taking this position, I stand with friends, colleagues, and loved ones in Israel – including Shalom Achshav (Peace Now), the veteran Israeli peace movement. I seek out Israeli wine at my local stores, but only buy it if it comes from one of the vineyards inside the Green Line.

I boycott settlements – and urge others who care about Israel to do likewise – because settlements and their expansion is the greatest obstacle to achieving a two-state solution for Israel and her Palestinian neighbors, and thus the greatest threat to an Israeli future that is Jewish, secure, and democratic.

My position on settlement boycott is consistent with my life-long tradition of fighting the sense of helplessness that comes from seeing policies that are antithetical to my values and my Jewish tradition of trying to "heal the world.” I am, in word and deed, standing up against settlements and standing up for the values I hold dear, including my love for Israel.

That is why I was shocked when Israel’s Supreme Court – a court that historically has been "a light unto the nations" – ruled to uphold a law that makes the mere statement, "I support the boycott of settlement products and urge others to do the same," illegal.

It is also why, as the president and CEO of Americans for Peace Now, a Jewish, Zionist US organization, I am determined to scrutinize the new Israeli government's policies on peace and democracy, and why I will not hesitate to call it on policies that I believe are disastrous for Israel's future.

I am often asked how, after working so long for Israeli-Palestinian peace, I haven’t given in to despondency and hopelessness. I am asked this particularly following events like the collapse of the peace process, or the formation of Benjamin Netanyahu’s new government, the guidelines of which don’t even mention the Palestinian issue.

How can it be that Israel’s Knesset will soon be introducing a new version of a bill to muzzle left-wing NGOs?

How can it be, that Israel’s prime minister has made Ayelet Shaked the new justice minister: That the next government of Israel has placed in such a pivotal position a woman best known for driving efforts to weaken Israel’s courts, and who proposed the bill that would limit funding to progressive NGOs.

What keeps me going, I think, is my rage. That same rage I felt (and feel) against misguided war, racism, discrimination, and injustice of all kinds. And, as I have done all my life, I channel my rage over Israeli settlement policies into action. I am not helpless: I can stand up and take action, and I can urge others to do the same. I can educate others to understand and share my rage over policies that threaten to destroy Israel and deprive its citizens of the secure future they deserve. And I can help them see that channeling our rage into pro-Israel, pro-peace action is the best – the only – antidote to the despair that comes from feeling helpless in the face of self-destructive, morally intolerable Israeli government settlement policies.

As the most reactionary government in Israel’s history is sworn in this week, I am determined to stand for what I believe is necessary for Israel to survive as a democracy and a Jewish state. I hope others will come to understand that supporting Israel means standing against the policies that members of this government espouse. As a dear friend of mine often says, it's not about Right vs. Left, it's about right vs. wrong.

This article appeared first on May 11, 2015 in the Los Angeles Jewish Journal.

Putting my money where my words are.
My last week and our New Year's letter to you
PAST ACTION- Tell Congress to Tell Knesset to Reject Anti-Democratic NGO Law
Legislative Round-Up: October 29, 2021
APN Intern Naomi Tamura in The Eagle: To Honor Rabin, Condemn the Occupation and Support the Two-State Solution
Legislative Round-Up: August 16, 2019
APN's Rabbi Alana Suskin in the Jerusalem Post: Don’t give up on Israel!