APN Intern Naomi Tamura in The Eagle: To Honor Rabin, Condemn the Occupation and Support the Two-State Solution 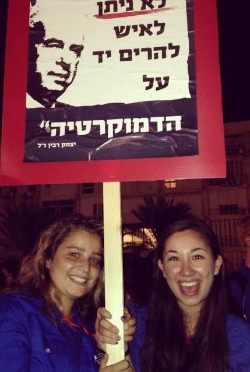 Three years ago, I attended an annual peace rally in Tel Aviv to honor the life and legacy of Yitzhak Rabin, the fifth Prime Minister of Israel and a tireless champion of peace who was assassinated by the anti-peace extremist, Yigal Amir, in 1995. Along with friends from my youth movement, Habonim Dror, I stood in pure awe among a sea of 35,000 fellow peace activists. We wore our blue movement shirts, held posters demanding peace and sang Shir LaShalom - the song Rabin had sung just moments before his assassination. It was the most sobering, yet electrifying experience I had ever been a part of.

This week, as I prepare to honor the 21st yahrzeit of Yitzhak Rabin, I want more than anything to return to that moment. Still clear in my memory, my heart simultaneously aches and blossoms when I recall the feeling of being surrounded by tens of thousands of people, young and old, united by our commitment to peace despite the ongoing violence and incitement. This experience has inspired me to honor Rabin’s legacy in real ways -- how to spread his vision for tolerance, freedom and peace, how to help build a shared future for both Israelis and Palestinians based on these lessons and how to inspire others to join me in doing so.

I am committed to working for peace for several reasons. Next year will mark the occupation’s 50th anniversary. This past week, Netanyahu promised to “continue to take care of settlements in Judea and Samaria,” expressing support for the Israeli settlers whose occupation over the West Bank undermines prospects for peace. The Israeli government has threatened to demolish the Palestinian village of Susya, and has until November 15th to make a final decision. If they decide to move forward with demolition, they will be paving space for more illegal Israeli settlements. And Israel, the beautiful country I called home for nine months after high school, is not living up to its ideals as a just and democratic state- the ideals that form the backbone of both my relationship to Israel and my Jewish identity.

However, I have not lost hope. Call me an optimist, but the pursuit of Israeli-Palestinian peace demands my-- our-- optimism. To lose hope would be to succumb to terror and violence. It would be to undermine the strength and resilience of those who persevered through centuries of adversity to fight for Israel’s existence, to ignore those who have fought hard to achieve Palestinian statehood, and to ultimately deprive both peoples of a better future. To lose hope would be to tell the next generation of the Israeli-Palestinian conflict that we are throwing this dream of peace into the abyss. To truly honor Rabin’s legacy, we must commit ourselves to working toward the most viable solution for peace. Today, more than ever, this situation unambiguously calls for the advocacy of two-states, one Israeli and one Palestinian, living side-by-side in peace and security.

I am serious about building more tolerance, understanding, and peace between both Israelis and Palestinians - but to do so, I need partners. The American Jewish community is robust in its culture and traditions, yet when it comes to using our influence to advance peace, we are weak. I am tired of hearing American Jews who claim that they are advocates for peace, yet defend anything the Israeli government says or does, especially the building of settlements. When we as a community shy away from criticizing Israel’s policies, we justify the ongoing incitement, undermine Israel’s democratic future, and bring Israel closer to a one-state reality, stretching from the Jordan River to the Mediterranean Sea.

As a Jewish woman who strives to act on her Jewish values wherever and whenever I can, who is committed to Israel’s future as a Jewish and democratic state, who stands up for human rights and dignity for both Israelis and Palestinians, I believe it is time that the American Jewish community unite to work for a two-state solution. It is the best option that we have for peace, and failing to support it wholeheartedly is undermining both Palestinian and Israeli security interests.

Therefore, we must take steps necessary to achieve a two-state solution. We must first condemn the occupation. The second step involves supporting progressive Jewish organizations such as J Street and Americans for Peace Now, who each strive to achieve a two-state solution, ensuring the secure and democratic future of Israel and rights for both Israelis and Palestinians.

But this is not enough; I demand that we take it one step further. We must also be willing to speak out against pro-Israel institutions when they do not act in Israel’s best interest, the best interests of the US-Israel partnership, human rights and our own Jewish values. AIPAC, the most prominent of the American Jewish organizations, claims to support the two-state solution, but such a claim is nothing more than empty rhetoric when it fails to condemn Israeli settlements or the occupation. My Jewish values and my political values are thus one and the same. I refuse to give power to Jewish institutions who are unwilling to remain truthful to their claims.

We must continue to take action by placing demands on local and state representatives, senators, synagogues and Jewish community leaders. Tell them the importance of condemning the occupation and speaking out against Israel’s policies that damage prospects for peace. They are, after all, accountable to us -- their donors, voters, members and students. Their jobs are to represent our values and interests, and when our interests are not being represented fairly or accurately, it is our responsibility to speak out.

We must do so until Israel’s policies prioritize democracy, security and peace for both Israelis and Palestinians over the occupation and settlements. Otherwise, our silence further undermines Israel’s future as a Jewish and democratic state.

Therefore, I invite others to honor Rabin’s legacy with me. I urge fellow advocates for peace and fellow members of the American Jewish community to both support the two-state solution and call for an end to the occupation. It is urgent for the future of Israel’s Jewish and democratic character, urgent for the Palestinian livelihoods that the Israeli occupation destroys and urgent for a future of greater respect, tolerance and shared understandings between both peoples. We have a choice: Rabin’s 21st yahrtzeit can be just another year of rhetorical support and empty promises, or it can be the start of a united and honest effort toward working together for peace.

This article appeared first on November 2, 2016 in The Eagle