Twenty-five years ago this November 4th, thousands of Israelis gathered at a Peace Now rally in what was then known as Kings of Israel Square. Prime Minister Yitzhak Rabin, who had the courage to shake his enemy’s hand on the White House lawn just two months earlier, stood in front of the audience of hopeful faces and announced “the path of peace is preferable to the path of war.” Sadly, we all know what happened next. Minutes later, he was gunned down by a radical national-religious Israeli, assassinated for his willingness to embrace change, to grow beyond a military commander and become a champion for peace and a better future for Israel and its Palestinian neighbors.

Perhaps you were there, holding a candle and singing with thousands of Israelis and Aviv Geffen as he almost predicted the outcome of the evening with his somber lyrics, “to cry for you.” Yitzhak Rabin risked and lost his life for a chance to make peace. He did not succeed. But we shall continue until his dream is realized. Yitzhak Rabin is my hero. And I hope you will join me this fall as we commemorate his life and his legacy.

There will be more information coming soon regarding APN’s October 20th celebration of Yitzhak Rabin, which will be hosted by actor, social activist, and APN board member Mandy Patinkin. But in the meantime, I hope you will consider making a gift to APN as we gather for the High Holidays and continue to work towards the peace that Rabin championed—and all of us—believe in so passionately.

During my time in the IDF, I had the chance to serve in an honor guard for Prime Minister Rabin. The guard was made up of lone soldiers who, like me, had moved to Israel without their families and volunteered for combat units. Before the scheduled event, Prime Minister Rabin shook our hands and thanked us for our service. I took my 30 seconds with him to thank him for having the vision to see beyond a lifetime of confl ict and to instead fi ght for peace.

I was not in Kikar Rabin for the peace rally, but like so many in Israel and around the world, as soon as I heard the news, my path became clear. I would honor Rabin’s legacy by continuing the struggle for peace.

Over the last 25 years I learned many things about making change. I learned that you have to be willing to grow and be flexible and be courageous. You have to be willing to speak out when others around you believe the opposite. You have to take risks and do uncomfortable things. And I long ago learned that simply talking about what’s needed does not change the world and does not get you to peace. Bold action, honesty, creativity and a willingness to truly listen to different narratives gets you to peace.

As soon as the news came in that Rabin had been assassinated, I remember thinking the IDF that war was now imminent. We assumed the perpetrator was a Palestinian. But we soon learned that the enemy this time came from within. The assassin was an Israeli who was so opposed to peace that he took a gun and killed his own prime minister. Instead of going to war, we bowed our heads in shame.

Instead of starting a war, the assassination paralyzed the peace process. It shattered the fragile good will and diplomacy that had been building. And it also shattered our hearts.

Yet here I am, 25 years later, at the helm of Americans for Peace Now, the oldest organization dedicated to peace between Israel and its Palestinian neighbors. From the day I made myself that promise to honor Rabin’s legacy, to this moment when I am honored to be picking up the mantle of the struggle for peace, we have seen Israeli and Palestinian leaders come and go. We’ve seen American presidents of both parties try and fail to bring peace.

For 25 years, I have worked in pursuit of peace. I have been preparing for this role for my entire life. And I committed, together with you, to see through what Yitzhak Rabin started.

And yet, a quarter of a century after the shocking and tragic day, there are still more obstacles. Today we are faced with a new enemy, a challenge to our ability to gather in community, as so many did that evening in Tel Aviv, as Jews have done for millennia.

The 2020 High Holidays will be an experience unlike any the Jewish community has seen in at least a hundred years. With a pandemic raging, we will be unable to gather as we usually do—to pray, to mourn, to celebrate, to atone, to be together as we set out a path for the new year.

While we are accustomed—and even commanded—to pray in community, we will be finding new ways to approach our annual rituals. For many of us, it will be a strange and isolating experience. We will not be gathering in synagogue to intone Kol Nidre or hear the shofar, we won’t be emptying our pockets of breadcrumbs together at the river for taschlich, and we won’t be inviting our guests to eat in our sukkot to mark the arrival of autumn.

We will be watching our clergy on Zoom, unable to hug each other and absorb the collective energy of repentance and atonement. We will be eating with small family groups or perhaps even by ourselves. It will be a profound, unnerving experience, especially when faced with the most somber, existential questions of the season—who will live and who will die.

But I think we can find the good in this new way of approaching the holidays. 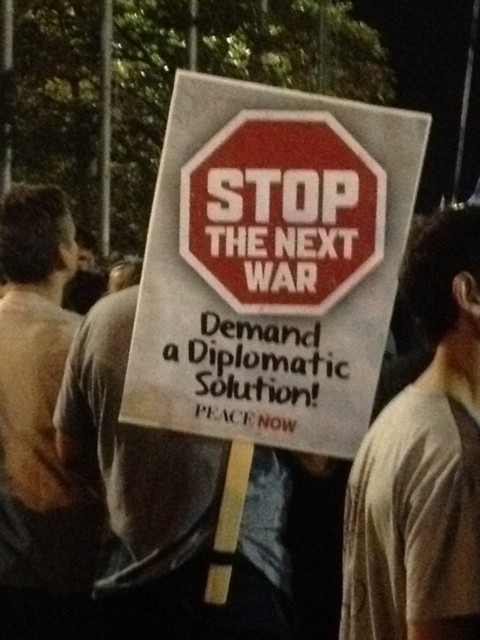 Just as the pandemic has required that we move inside—both literally and figuratively—and turn within ourselves for meaning, calm, and the strength to keep going, this year’s high holidays will be asking the same of us. And more.

I want to suggest that we also can use this moment of calm and quiet to search for our recommitment to peace.

As a longtime supporter of APN, and as a fellow traveler on the quest for peace, you have been holding up the beacon of hope for as long as we have been trying to make peace a reality. Like me, you have believed in the process, held your breath as each step opened the door just enough to engender the hope that this might be the right time, and exhaled with disappointment and anger when yet another opportunity was squandered.

You have gone to demonstrations, visited Israel and Palestine, and supported the prospect for peace with your money and your time. Like me, you mourned when Yitzhak Rabin was murdered on that early November evening. And yet, like me, you are still here. Yearning, hoping, and working for peace.

Peace may feel farther away than it did in 1995, but today, we have new leaders rising up—in Jerusalem, in Ramallah, in Washington DC. We are creating new language, new actions, new alliances, and a new fervor to achieve what Rabin did not. We are building a new peace movement for our times, one that will include people who care about peace and justice and who are willing to take the risks that we need to get there. One that will include you and me.

We need you to get there. We need your heart, and your time, and your support. We need you to make a gift this year to APN that will demonstrate your commitment to the path for peace that Rabin started, and that we are going to move forward to completion.

We need your support to work on policy that will move peacppe to the top of the agenda. We need your support to help create momentum on both sides of the ocean — with APN and our Israeli partner, Shalom Achshav — so that we can spread our message far and wide and light the beacon of hope in a new generation of peace activists who have the skills and the strength and the same idealism that has buoyed APN for 40 years.

We need you to make peace a reality at last.

So as we move inside during this holiday season, I hope you will use the quiet space to recommit yourself to peace in our lifetime, and make a generous gift to APN.

I am looking forward to celebrating the life and legacy of Yitzhak Rabin on October 20th with you and Mandy Patinkin and with our community of friends and supporters from around the world.

In the meantime, thank you for your commitment to APN. Together, we are building a movement. Shana tova, and with shalom, salaam, and peace,


PS: Look for your invitation to APN’s Rabin Commemoration in your inbox soon.

PPS: Again, we are so grateful for your strong and generous support of APN, and I hope that when travel is again a possibility, I will be able to come to your city and thank you in person.

We Welcome The New Year And The Change We Hope It Brings
Hope and Determination - Letter from Kathryn Grody and Mandy Patinkin
Chanukah Greetings (and Double Your Donation Offer) from APN Chair Jim Klutznick
Matching Donation Grant Still Active - "This Is Not A Moment, It's The Movement" - Letter from new APN President and CEO
Join us in honoring Yitzhak Rabin
Mandy Patinkin for Giving Tuesday - "We all want peace now, not peace later"
Ginna Green: "I am grateful to be on this road with you"