Hope and Determination - Letter from Kathryn Grody and Mandy Patinkin

Thirty-eight years ago, when my wife Kathryn and I were expecting our first child, we went to Israel to research the movie Yentl. I stayed at an Orthodox Yeshiva, and Kathryn at The American Colony Hotel. The next day we spent a beautiful day in Hebron, surrounded by curious children happy to meet visiting Americans, and went on a tour of a vibrant neighborhood, guided spontaneously by a sweet stranger at the Cave Of The Patriarchs and Matriarchs. Our baby boy moved fiercely when visiting this tomb, and we decided that was a sign that he should be named Isaac. Fast forward almost 40 years, when I was filming an episode of Homeland, and I traveled to Israel and Palestine. Once again, I visited Hebron. But this time, traveling with Israeli peace activists from Shalom Achshav, those thriving streets Kathryn and I had seen were no longer.

This “sterile” main street was the vast market of Hebron, known as Shuhada Street. It served the city and surrounding villages and was shut down by the Israeli army. Separation measures were imposed to protect the settlers against attack and further reduce friction between Arabs and Jews. Palestinians’ access to the center of town was severely restricted, their shops closed, a few stores taken over by settlers, and most were boarded up.

The main street looked like a ghost town, its crumbling buildings scarred with Hebrew graffiti: “No Arabs, No Mice.” “Death to the Arabs” and worse.

A nauseous sense overwhelms at the hate-filled words but even more so at the sight of all the boarded-up stores that were once a vibrant marketplace. With Israeli soldiers on guard over this area, Palestinians, because they cannot use the street, must reach their homes via their neighbors’ rooftops or by climbing through windows.

Think about it: Only Jews are allowed on that street, even though Arabs live in the apartments over the boarded-up shops. The very word used to describe this street division, “sterile,” conjures images of unthinkable crimes.

I have long sat on the board of Americans for Peace Now, and Kathryn and I both believe deeply in the prospect of peace. But this experience rattled us to our core, and I began to understand the profound complications for both Jews and Palestinians in a new light.

When I left Hebron, I went straight to the offices of Peace Now in Tel Aviv, and relief washed over me as I encountered the staff and friends of Shalom Achshav, who dedicate every day of their lives to ﬁnding peace. Their inspiration forced me to dig deep and recommit myself to find the path forward.

That is why we are asking you to contribute to Americans for Peace Now today.

These are challenging times. Everywhere we turn, we find ourselves battling over the basic tenets of right and wrong. Never mind nuance, we are in the fight for the soul of democracy, both in the United States and in Israel. We are faced with corrupt leaders and administrations that are more than willing to ignore the core principles upon which both our nations were founded.

And while America is perhaps ﬁnally grappling with a past based on racism that has been baked into our society and is emerging today as the ﬁght of the century, Israel continues to ignore the moral bankruptcy that a 50-year Occupation has wrought and rejects the notion that its Palestinian neighbors deserve to survive and thrive.

We are better than this. We believe in freedom. And democracy. And peace. And justice. And we are on the right side of history.

I was shocked and fearful when I walked down that unrecognizable street in Hebron. But I also realized that we could not let our fears stop us from doing what’s right. We must step into the road and stare it down. We must speak up, even when speaking up, places us in danger. And we must continue to fight for peace so that Israelis and Palestinians can live, with freedom, justice, and dignity, on the same land, in the same place.

Several years ago, I performed a concert for Peace Now, and after the show, I went backstage and showered in the gymnasium. Coming out of the shower, a man shouted, “How dare you raise money for Peace Now!” And I admit that I was proud that at my most vulnerable, I was able to find my voice and responded, “Look, I support Peace Now. If you want to support peace later, that’s up to you.”

We know that there are settlements in Israel with signs at the entrance — “Arabs Beware.” Imagine what this would look like here in the United States. Unthinkable, at least today. But today, in Israel, overt racism is policy. 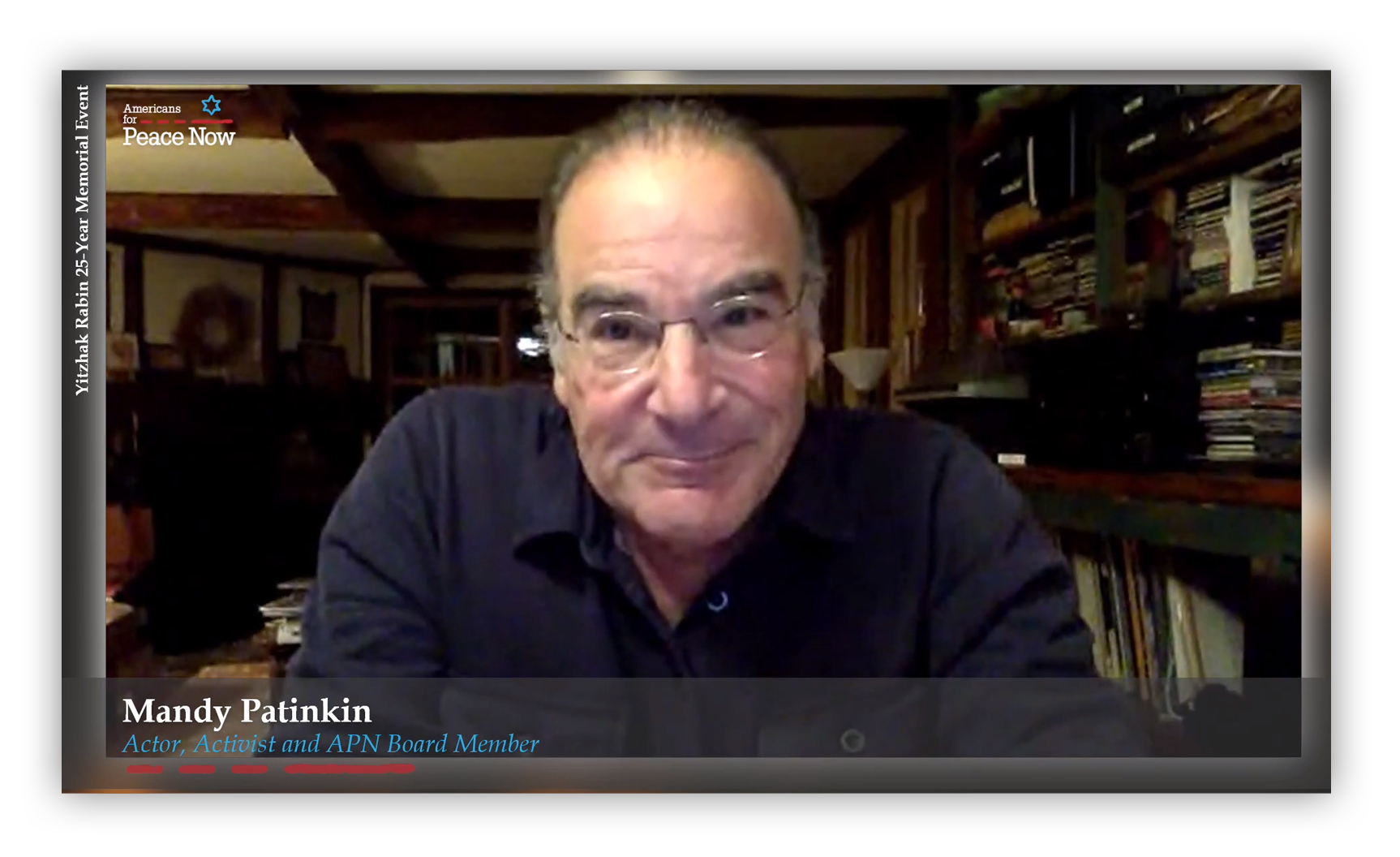 We can do better than this. Take comfort knowing that thousands of Israeli activists are laying their lives on the line every day to expose and take these signs down and walk the path to peace.

After a lifetime of fighting, one person who walked that same path was the late Israeli Prime Minister Yitzhak Rabin. Last month I had the honor of hosting an evening commemorating Rabin’s life, 25 years after an assassin’s bullet took him down at a peace rally.

Americans for Peace Now brought together over 1,500 people from all over the world to seal the memory of Rabin’s sacrifice for peace. Our partners at Shalom Achshav lit candles in Rabin Square, and together, behind our Zoom screens, we all lit candles in unison, sang and recognized that our journey continues.

This coming year Americans for Peace Now will mark its 40th anniversary. Forty years of working for peace. Forty years of fighting the opposition, breaking down the barriers, one by one. We don’t want to find ourselves, after another 40 years, still in battle mode. We need to move forward now.

We know that this has been a year in which there have been many demands for your attention and support. But, as it is said in Pirkei Avot, “you are not obligated to complete the work, but neither are you free to desist from it.”

We are not free to desist from the quest for peace. We believe in it. We know you believe in it. Please join us and make a generous gift to APN in this extraordinary moment. Your gift will help chart a peaceful future for ourselves and for the generations to come.

So we hope you will continue to stand with us, with hope and determination, to bring peace to a country and a place and a people we love.


P.S.: We will be celebrating APN’s anniversary with a range of great activities in the coming year. We hope that you’ll join us to mark both the occasion and the recognition of how much has been accomplished in the quest for peace while knowing that there is still much work to be done.

P.P.S.: Our oldest son Isaac, whose name was inspired that day 38 years ago in Hebron, grew up to be a peacemaker and is now a community activist working for equity and justice wherever he goes!

Kathryn Grody and Mandy Patinkin met while working on a play, and have been married since 1980. They both have distinguished careers as actors, performers, and writers, and work together as activists promoting peace, justice and raising attention about the international refugee crisis.

Mandy Patinkin for Giving Tuesday - "We all want peace now, not peace later"
Messages of Support for APN at Year-End 2020 from Mandy Patinkin and Kathryn Grody, Ginna Green, and Hagit Ofran
APN High Holiday Letter from President & CEO Hadar Susskind
APN's Mark Bilsky: "In honor of my colleagues at Shalom Achshav"
We Welcome The New Year And The Change We Hope It Brings
Matching Donation Grant Still Active - "This Is Not A Moment, It's The Movement" - Letter from new APN President and CEO
Passover Letter Intro Note and Matching Offer from Jim Klutznick, Chair of the APN Board