My last week and our New Year's letter to you

I’ll make it quick – I would rather have you read the letter below – but I do have news for you, both bad and good.

The bad news: our beloved CEO Debra DeLee has retired from APN after 21 years.

The good news: APN will remain a vibrant important player working for you as a preeminent voice for a two-state solution. And APN will continue speaking the truth in the New Year – as is our hallmark.

We will miss Debra dearly – she’s truly one of a kind. You can tell this by just reading her letter below. But we must move on and persevere, and grassroots donations from supporters like you are the foundation of our existence and efforts.

To honor Debra and APN, I am offering to double your donation of up to $25,000 until the end of this month. It is with your help that our truths will continue to be heard. 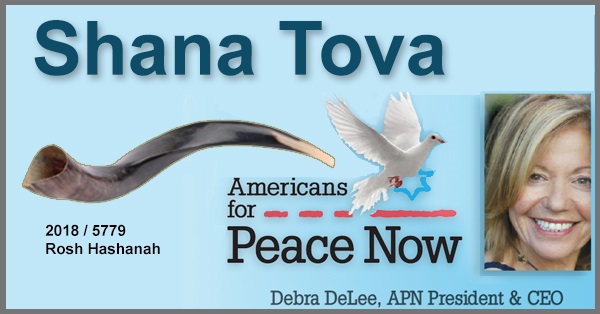 A version of this essay also appeared in The Forward on August 29, 2018 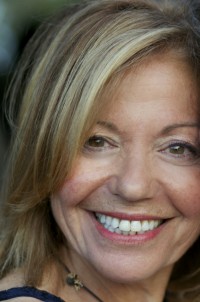 By the time you receive this letter, I will have stepped down from my position as President and CEO of Americans for Peace Now (APN), after serving in this capacity for 21 years. However, I’m writing this with six weeks left in my tenure at APN, and I’m anxious to share my thoughts and feelings with you, this being the last time I will have this forum through which to speak to you.

I was hoping to put into words the many feelings I’m experiencing at this time:

Gratitude: for having the honor to serve the dedicated and supportive APN Board, my talented APN colleagues and you, our generous and committed supporters.

Pride: in the important work that APN does both here and in the Middle East.

Awe: at our colleagues in Shalom Achshav (Peace Now, the Israeli peace movement) — many of them among the signers of the original officers’ letter establishing the organization in 1978 — who work tirelessly for a future that their children, grandchildren and those of their Palestinian neighbors deserve.

Excitement: about new possibilities ahead.

But, sadly, I am also feeling rage. The targets of my rage are those who know right from wrong, yet have chosen wrong for personal or political expedience.

My rage about what is going on in our country is not aimed primarily at Donald Trump. He is so narcissistically megalo-everything, and ignorant of his own limitations, I expect nothing better from him. My rage is focused on enablers who know better, who recognize the threat his policies present to our country, our values, our constitution, and yet who do nothing to stop him. They do his bidding, applaud him and support him publicly while they wring their hands privately at the danger he poses domestically, to our standing in the international community, and yes, to our nation’s security. Shame on them.

I feel rage as well at many American Jews and at much of the organized Jewish community. How many times have I been told “I’m with you in my heart of hearts, but I cannot support Americans for Peace Now because (complete the sentence) . . .”

1. I would lose my standing in the Jewish community

2. I would be isolated in my synagogue

3. It would hurt our fundraising

We American Jews, who fight with great energy against the separation of children from their families at our border, don’t speak out as Gazan children are condemned to live in squalor, and Palestinian children in the West Bank are forced to see their parents humiliated in punitive night-time raids, broken in spirit as they see their dreams for the future destroyed. We Jews, whose historical narrative is the story of fighting for a homeland, of being persecuted, of being “the other,” have not fought against the 51-year occupation of another people.

We Jews, who played a significant role in the civil rights movement in the US and in ending apartheid in South Africa, don’t fight policies that will lead to Israel becoming an apartheid state as the occupation becomes further entrenched. We Jews, who know the imperative of repairing the world, through our silence instead support leaders and policies that damage the democracy and human rights of the Jewish homeland. And you tell me that you are concerned about your standing in your Jewish community and your fundraising efforts, and that I should understand all that is involved in “well, you know…”?

No, I don’t know. I didn’t know when I fought for civil rights in the 60s, when I fought to end the war in Vietnam, when I marched for same-sex marriage. These were all issues that people knew “in their heart of hearts” were right, but didn’t for years publicly support or work for “because, you know.” All of those causes succeeded, but many years later than they deserved, with lives lost and ruined as a result.

I recognize that this rant may seem more suited to a blog on some sort of social media, not in our annual Rosh Hashana mailing. But I hope you’ll indulge me a bit longer while I share why I’ve committed the past 21 years to APN.

Not once in 21 years — not at a Board meeting, staff meeting, or in a hallway discussion, has APN refused to take a policy position because it was controversial or unpopular. Not when we testified on the threats and realities of settlement expansion before the UN Security Council. Not when we took a position to boycott products made in the settlements. Not when we urged President Obama to not veto a much vilified UN resolution which simply reiterated US policy in support of two states. Not when we testified on behalf of, and helped move through Congress, the conditioning of US loan guarantees to Israel based on spending over the Green Line. Not when we took on JNF for its campaign to evict Palestinians from their homes in the City of David - owned by their families for generations - to move settlers into those homes. Of course we discussed the ramifications of taking all these positions, but if there was a position we supported “in our heart of hearts,” we took it. And we asked you to take it as well. And we have been gratified that so many of you joined us and boldly supported those successful efforts.

Several years ago, I received an email from a high school classmate. We had known each other since we attended nursery school at West Suburban Temple Har Zion in River Forest, Illinois. Our fathers had bowled together in the B’nai B’rith league at the temple, and our mothers served together in the temple sisterhood and as leaders of their Hadassah chapter. I opened the email with curiosity and interest, since we had not spoken since we graduated. Among other hateful comments in the email, he called me “an enemy of Israel” and told me he had prayed to God to strike me dead on Yom Kippur. I continue to wonder what could produce that level of hatred towards an old friend. My leadership of a Jewish, Zionist organization? APN’s belief that compromising on borders is worth saving the lives of both Israelis and Palestinians? Is it APN’s conviction that Palestinians have the right to a homeland, to see their children have the same opportunities as their Israeli neighbors? Is it because we want to prevent missiles from falling on our Israeli friends and family who live along the Gaza border? Is it because we value life over dogma and peace over war? Personally, I remain conflicted on the issue of God, but if God did hear my friend’s prayer, S/he chose not to answer it. I am profoundly grateful.

There is one more emotion I want to share: Hope.

What gives me hope when there is so much that enrages me? It’s pretty simple. People. Beyond the diplomatic accomplishments regarding Israeli-Palestinian peace over the past two decades — and they are significant — I draw hope from the people. On both sides. When I see the commitment in the eyes of the young, newly-recruited peace activists of Shalom Achshav, I see hope. When I see Palestinian entrepreneurs building their future state, I see hope. When I see tens of thousands of Israelis demonstrating for peace, tolerance and democracy, I see hope. And when I see how many of you read what we produce, take action when we ask, and yes, support us with your dollars when there are so many demands on your resources, I see hope.

Throughout my two decades at APN, I’ve seen — and experienced - a lot of ups and downs. I’ve felt many disappointments, but also moments of great hope. I believe that the best way to get past the disappointments and take advantage of the hope is to act.

And so I encourage you to take these actions:

1. Go to our website — peacenow.org — and read about the programs and publications that I didn’t have the space to write about here. Sign up for News Nosh and our Weekly Update. Listen to our PeaceCasts. Read our in-depth policy papers. Sign our petitions and take action through our Action Alerts. Take advantage of the resources we provide there.

2. Make a generous TAX-DEDUCTIBLE contribution to support our programs and the work of Shalom Achshav in Israel.

3. Accept my deepest thanks, gratitude and appreciation for all that you do and will continue to do to work for two states and to end the occupation. It has been an honor to work for and with you.

There is a Yiddish saying: Kein briere iz oich a breire — To not have a choice is also a choice. We all have a choice. To choose what we believe in. To choose to make a commitment to effect change. To choose to do our part to repair this ailing world. I hope that when you make your choices, you will choose Americans for Peace Now and Shalom Achshav as the vehicles to effect change for Israel and its Palestinian neighbors.

Have a sweet, joyous and meaningful New Year.

P.S. One gift of working for APN was working side by side with my friend and APN Board member Sara Ehrman, who died last year at 97. She was indefatigable, smart, funny, irreverent, stylish and committed to the two-state solution. We were honored that she chose APN as the vehicle through which to work for a resolution to this conflict. I am proud that APN has established The Sara Fund, which will support programs, both in the US and Israel, that foster intergenerational engagement on the issue of peace between Israel and its Palestinian neighbors, particularly focusing on women — from the youngest advocates, to the oldest among us. I hope you will support this fund in Sara’s name.

My tenure as CEO is ending...
Putting my money where my words are.
A Letter from APN for Passover 2021
Matching Donation Grant Still Active - "This Is Not A Moment, It's The Movement" - Letter from new APN President and CEO
APN High Holiday Letter from President & CEO Hadar Susskind
APN CEO Debra DeLee in the Jewish Journal: When the Knesset tries to muzzle free speech