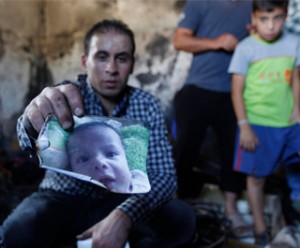 "Our Israeli sister-organization, Peace Now, will tomorrow lead a march in Tel Aviv to protest the violence. We hope that Israelis will translate their rage into action by marching together and urging their government to adopt a zero-tolerance approach toward Jewish terrorism. As Peace Now stated in its invitation to the march: 'This is a struggle for the character and for the future of the state of Israel and of Israeli society.'"

APN has been documenting extremist Jewish terrorism in Israel and the West Bank. To view our timeline, click here: https://peacenow.org/entry.php?id=1077#.VbtuMflVhBd