"Appearances can be deceiving" - A letter for Rosh HaShana from Jim Klutznick, APN Chair 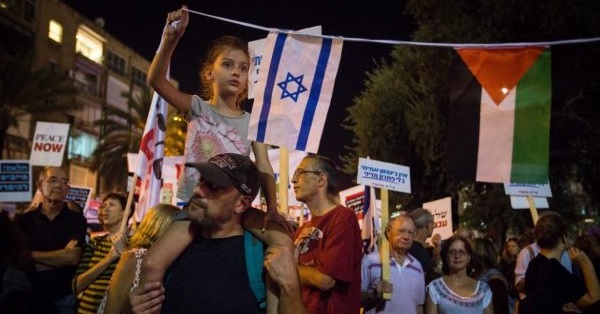 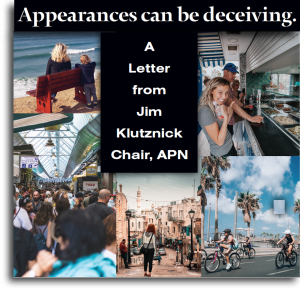 Appearances can be deceiving.  The cafes of Tel Aviv bustle and are full.  Families gather in the gardens of Haifa and float on the Dead Sea.  Even in Jerusalem all appears calm, and the slight whiff of imminent apprehension is barely detectable.  The conflict does not impinge upon the good life.

And yet, tensions simmer.  Another Israel exists.  Check the budget and see how a constant state of alert devastates funding for Israeli education, for social services, and for investment in infrastructure.  Stroll the cemeteries, and see dates of death following dates of birth in quick succession.  Too quick.  Examine the passerby and count the war injuries, visible in the wheelchairs and the prostheses.  Read the public opinion polls giving voice to the low esteem in which the “Occupier,” is held.  Visit the mosques in Nablus or in Gaza and hear the hatred dripping venomously from the imams’ tongues.  And then ask yourself, soberly, is doing nothing but accepting the status quo the best possible program?

In the years I have spent thinking about the conflict, thinking about the children, and thinking about the future, it has become increasingly clear that the struggle for peace and security based on a two-state solution can no longer be separated from the Israeli domestic sphere.  Consider that, in a nation in which new medical discoveries are constantly unveiled and whose industries advance the frontiers of science and technology worldwide, every fifth Israeli lives in poverty and Israel has the highest child poverty rate of any OECD country.  Inequality rates are amongst the highest in the western world and render nearly half of Israel’s Arab citizens below the poverty line.  Meanwhile, tens of billions of dollars have been spent on illegal West Bank settlements.

The costs of the Occupation upon the economy, the health, the diplomacy, and the psyche of Israel speak for themselves.  Settlers, who constitute less than five percent of the Israeli population, are siphoning disproportionate funding in the provision of services in the Occupied Territories, security spending, legalization of illegal outposts, and much more.  Meanwhile, the children of Israel are not having their basic needs met.  And the future flourishing of Israel is being stifled as spending on education, health, and welfare are curtailed to satisfy a burgeoning defense budget.

There was a time, not so long ago, when supporters of Israel knew that in the face of persecution and terrorism, Israel was a beacon of hope.  But today, a vocal contingent of ideological settlers lay claim to a biblical inheritance, in the name of recreating a biblical Judea and Samaria, whose realization will dictate either the formalization of an apartheid state, or the extinction of Israel’s majority and character as a Jewish state.  Meanwhile, in the West Bank, Jewish fundamentalists throw rocks, vandalize cemeteries and homes, and build in settlements and outposts to put facts on the ground that inhibit the potential creation of a sovereign Palestinian state, and thus, the possibility of a just and secure peace with the Palestinians.  All of this is occurring under the auspices of an Israeli government actively endorsing the erosion of the rule of law and the very foundations of Israeli peace and democracy with the increasingly enthusiastic support of the Trump administration.

This context provides a steep challenge for civil society organizations, like Americans for Peace Now, to work toward a two-state solution.  And yet, we continue to ask, what of the future?  What of the rights of the Palestinians, yes, and, what of the future health and well-being of Israel?  The folly of building settlements, which not only thwarts Palestinian national aspirations of a sovereign state, but also diverts resources away from Israel and affects its international standing, must end.  And, the misappropriation of military resources, in which millions are spent guarding handfuls of settlers, and risking the lives of one of Israel’s most valuable security assets— its young people in uniform— must end. 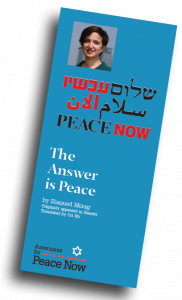 We of Americans for Peace Now and our Israeli colleagues at Shalom Achshav (Peace Now) seek to rekindle hope by working to build a viable, secure, and democratic future for Israel and the Palestinian people.  But I need your help.

In Israel, Shalom Achshav stands virtually alone as a major activist on both fronts: the two-state solution and the fight for human rights.  As an organization founded more than 35 years ago by patriotic, Zionist IDF officers, we ask if not for them, then who? These are the ones who know and understand what everyone else knows but tries to evade: Israel’s occupation of the West Bank, however one feels about whether the West Bank is Israel’s patrimony, is these days a weapon of mass destruction, or, more precisely, a weapon of national suicide.

Shalom Achshav is not a protest movement—its raison d’être is positive, not negative; it is not about where we are but about where we go from here. Shalom Achshav remains, as it has always been, committed to a negotiated two-state solution.  And as distant as that goal seems now, it remains the only way the conflict will ever be resolved peacefully.

Americans for Peace Now has become one of the most well-respected and sought-after source of information and analysis of what is taking place in the Middle East and the U.S.  Its staff works tirelessly to provide guidance to decision-makers with balanced, fair interpretations of what are often chaotic and confusing situations.  APN makes its tough, rational message heard, not only in Congress and the White House, but on college campuses, and in the Jewish community.

In this holiday season, I ask that you signify your support for APN by contributing as generous a tax-deductible donation as you can manage.  We rely upon the many donors like you, who continue to support us year after year.  We are truly grateful for your loyalty and dedication to the just fight for an equitable two-state solution.

Shana Tova and Best Wishes for the Jewish New Year,

P.S. Let us stand for what is right and what is still solvable.  Solvable in no small part because of the work APN and Shalom Achshav do.