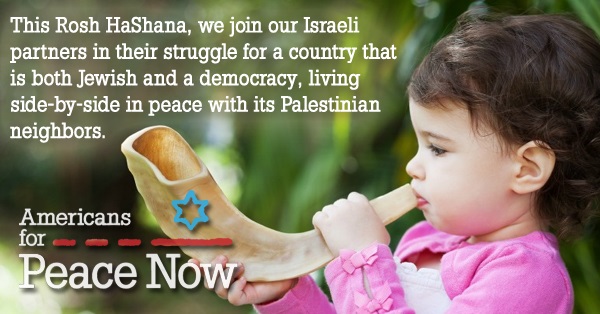 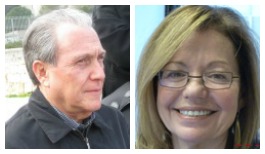 Rosh Hashana is a time to reflect. If your reflection brings sadness - and rage - at the ongoing assault on the values and principles you hold dear, both at home and in Israel, we share this with you.

This year, the Israeli Knesset legislated that those of us in APN - who work against boycotts divestment and sanctions (BDS) directed at Israel but who advocate boycotting the occupation and products made in the settlements - are not welcome in the Jewish homeland. Israeli law now states that a visa will not be granted to us because we, as non-Israelis, and APN, the organization on whose behalf we work, knowingly published a public call to boycott the settlements.

This year, Israeli lawmakers put on the Knesset’s docket bills to bar foreign donations to Israeli human and civil rights organizations. Likud MK Miki Zohar, in proposing the bill, said: “The time has come to dry up [the resources used by] leftist organizations that undermine the government, slander Israel and try to infringe on its right to defend itself. We must block their funding sources and thus prevent them from harming the state.” Not surprisingly, this bill targets progressive donors and does not affect the enormous financial contributions made to Israeli organizations by the likes of Sheldon Adelson.

This year, Israel’s right wing government launched attacks on the rule of law and the Israeli Supreme Court, historically judged to be among the most respected courts in the world, a true “light unto the nations.” MK Motti Yogev of the Jewish Home vowed to “act in any way possible to restrict the dictatorship of the Supreme Court,” and the Knesset’s Majority Whip, David Bitan of Likud called the General Security Service “cowards” for advocating caution in confronting Muslims on the Temple Mount.

And this year, the Knesset passed a law that retroactively legalizes illegal West Bank “outposts,” built in violation of Israeli law, even when they were built on privately-owned Palestinian land. “This whole debate is based on one question: Who does this land belong to?”, Science Minister Ofir Akunis of Likud told the Knesset plenary to explain why the Israeli legislature should vote to assert this “land grab” by fiat.

Or we could switch gears and try to put lipstick on the current situation as we prepare for the New Year.

We’re not doing either.

We’re acknowledging that we are all swimming against the tide. We’re acknowledging the rage we feel as we watch the trampling of principles, civility, and fairness. And we are urging you - even as we struggle in our own country to protect those same values - to stand with us, to not give in, to not give up on the future that Israelis and Palestinians deserve, achieved through a two-state solution.

Our greatest resource in this struggle is our “boots on the ground”, Shalom Achshav, the oldest and largest peace movement in Israel. Shalom Achshav of 2017 is re-energized by its new leader, Avi Buskila, and his army of new young activists, armed with facts, organizing skills and motivation. Avi, his staff and thousands of volunteers are energized by their love of their country, by their fears of continued occupation and Israel’s further isolation in the world. We join them in their struggle for a country that is both Jewish and a democracy, a country living side-by-side in peace with its Palestinian neighbors.

They are not giving up, and neither are we. As we usher in the new year, we resolve to do whatever we can for Israeli-Palestinian peace and for Peace Now. We hope we can count on you to join this resolution.

To learn more about the current crisis in Israel, read Yossi Alpher’s sober Q&A that you can read by clicking on the graphic image below, or on this link.

To learn more about the new and exciting programs of Shalom Achschav, click here and read the brochure.

To make a difference and have your voice heard on behalf of an enlightened Jewish and democratic Israel, support the work of Americans for Peace Now.

To bring about change, please make a generous tax-deductible contribution.

We wish you a sweet and hopeful New Year.

My last week and our New Year's letter to you
Fatigue? Fuggetabout it. Letty Cottin Pogrebin is inspired!
Resist the policies of Netanyahu and Trump
Ezer Weizman, former Israeli President and Minister of Defense, on Israeli-Palestinian peace
Peace Now's Shaqued Morag: "Good News from Israel"
A new peace generation shall lead
Putting my money where my words are.