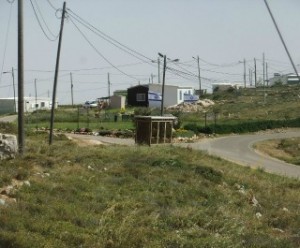 After its establishment, the Netanyahu government formed a professional committee for the regularization of West Bank illegal construction ("the regularization team") in order to offer solutions for the legalization of illegal outposts and construction in the West Bank. According to the Army Radio report, the committee, headed by Attorney Haya Zandberg from the State Attorney's Office, submitted a legal opinion to the AG which allows the Head of the Government Property in the Civil Administration to lease private Palestinian absentees' lands to settlers in order to establish a new settlement nearby to the location of the illegal outpost of Amona. The idea is to lease the land for three years only and then renew the lease every three years. By using temporary leasing the legal opinion avoids the problem that lies in the selling absentees' property. However, it is clear that the establishment of a new settlement is not at all temporary.

The legal opinion contradicts the Israeli legal interpretation since 1967 according to which Israeli governments have been determining their policies. Even Attorney Plia Albeck, a senior in the State's Attorney's Office who has been referred to as "the mother of settlements" stated that absentees’ property "cannot be used for the establishment of Jewish towns."

Absentees Property is privately owned by Palestinians who, as of now, reside outside of the West Bank. The Head of the Government Properties serves as the trustee of these properties and is obliged to protect them from damage and to ensure they will not be taken by others. Clearly the establishment of a settlement on private land owned by absentees is a violation of the trustees' obligation.

According to the Army Radio report, Attorney Zandberg legal opinion includes cases in which internal legal opinions of the Civil Administration stated that Absentees Property could be leased in a temporary and renewing lease. However, these are entirely different cases, in which the absentees' property had already been (illegally) used and there already exist third parties related to the issue. This is the exception that proves the rule, since the legal opinions mentioned above would not have been necessary had the leasing of absentees property were allowed.

If AG Mendelblit will accept the legal opinion, this will create an opening for the takeover of tens of thousands of dunams in the West Bank. The scope of absentees’ property in the West Bank is estimated at around 100,000 dunams (double than the size of Tel Aviv and similar to the land taken up by all of the settlements today). Thus, by leasing absentees’ property the government could establish many new settlements.

Accepting the legal opinion will also expose the Israeli government to lawsuits by the land owners, shall they return to the West Bank.

The most severe implication is that the state of Israel will crush the basic rights of Palestinians under its rule in the occupied territories, while violating international law - all out of the will to comply to the demands of a group of settlers that established an illegal outpost on stolen Palestinian land with the backing of the government.