Earlier this month, this relocation idea was raised by the regularization committee, a committee established by the government to find a solution for the illegal outposts issue. On August 7, 2016, the Attorney General, Avichai Mandelblit, stated that he will consider the option of moving Amona to a nearby absentees' property despite "weighty legal issues."

Peace Now: This is the crossing of a red line and a reversal of previous policies, including Likud governments' policies, according to which private lands cannot be used for the purpose of settlement. There is no dispute that Absentees' lands are private property and using them for the purpose of settlement will be considered illegal by legal advisors in Israel and abroad. In order to compensate a small group of settlers who stole private Palestinian lands, the Israeli government itself is now stealing private lands as well. The government's willingness to politically compensate the settlers of Amona is leading to devastating consequences on the ground and to the distortion of Israel's moral and legal systems." 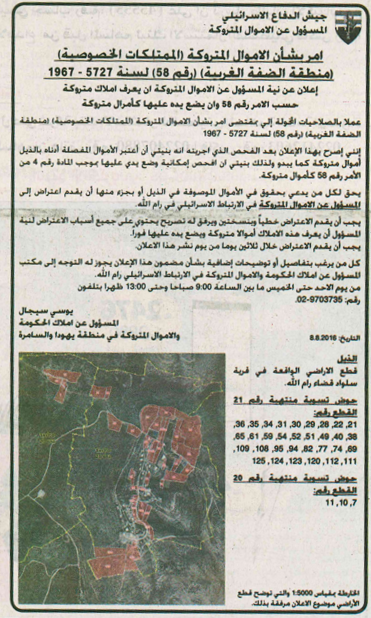 The announcement published in Al-Quds newspaper