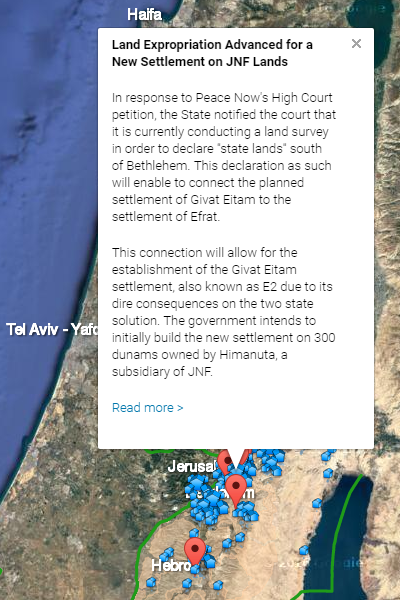 The Netanyahu government is actively promoting an extraordinarily dangerous and destructive new settlement plan which activists have dubbed “E-2” – a name that reflects the fact that the plan is as dangerous and destructive to the two-state solution as the infamous E-1 project (against which the international community has formed a united front). The E-2 project, which the settlers call Givat Eitam, involves thousands of new units to be built south of Bethlehem, near the settlement of Efrat. Documents recently released by the government in connection with a lawsuit brought by Peace Now show that the Netanyahu government is actively moving ahead with this plan at this time, including working to seize new land on which it can build necessary infrastructure to implement the project (a new major road).

State Department briefing 8/16/16: “We’re concerned because these plans, if carried out, would have the effect of isolating Bethlehem from the southern West Bank, and that’s fundamentally…fundamentally incompatible with the pursuit of a two-state solution.”