Planned “relocation” of the illegal outpost of Amona 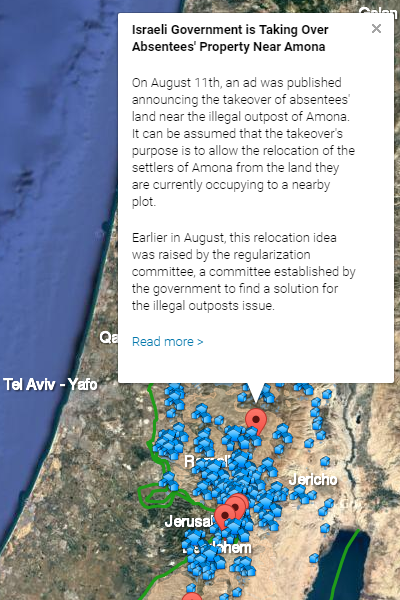 Amona is the largest illegal outpost in the West Bank, home to some fifty families, located near the settlement of Ofra, northeast of Ramallah. Built on some 100 acres of land registered as privately-owned by Palestinians, the outpost was built without permits from the Israeli government, but with the direct and indirect support of Israeli authorities. In 2006, following a decision of the Israeli High Court of Justice, nine structures in the outpost were demolished – but in the years since, the outpost has grown and flourished. Now, the High Court is forcing the Israeli government to take action once again to remove the illegal construction – but rather than simply removing the outpost, the Israeli government has decided to re-locate it – to another area of privately-owned Palestinian land.

State Department Briefing 8/11/16: “We’re deeply concerned by reports that the Israeli Government has begun the process to take over privately owned Palestinian land to relocate the illegal Israeli outpost of Amona. This would represent an unprecedented and troubling step that’s inconsistent with prior Israeli legal opinions and counter to longstanding Israeli policy to not seize private Palestinian land for Israeli settlements. If this moves ahead, it would effectively create a new settlement or significantly expand the footprint of an existing settlement deep in the West Bank. This is a continuation of a process that has seen some 32 outposts that are illegal under Israeli law being legalized in recent years.”

Planned new settlement of Givat Eitam, aka E-2
Planned demolition of the village of Sussya
Expanding the Settlers’ Hold in Hebron
APN Weekly Update - Support a referendum on the occupation, take action on settlements, APN letter in NYT
APN Update - Are you kidding, Ambassador Friedman?! Try PeaceCast, and Please remember us!
PAST ACTION - Thank Ambassador Shapiro for Speaking the Truth
PAST ACTION: Contact the State Department’s press office and urge a stronger response on Hebron and Amona