Press Release: APN to Support New Israeli Initiative for Referendum on the Occupation 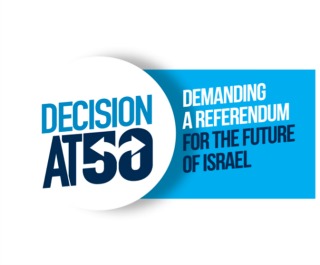 Shalom Achshav (Peace Now), Israel’s preeminent peace movement, in cooperation with other Israeli civil society organizations, today launched a new initiative demanding a referendum on the future of Israel’s rule over the West Bank and on peace with the Palestinians.

Americans for Peace Now, the U.S. sister organization of Shalom Achshav, supports the initiative. APN calls on all Americans who care about Israel’s future to support the call for a referendum on the occupation, which is now entering its fiftieth year.

The referendum initiative, anchored in a new organization, Decision at 50, will collect signatures of Israeli citizens, demanding a voice in deciding on the future of the Occupied Territories – a decision until now dictated by the settlers and their allies, through establishing facts on the ground, with an immense impact on the national security and wellbeing of the state of Israel.

Decision at 50 is the result of cooperation between several Israeli organizations, led by Peace Now and Blue White Future. Many prominent Israeli public figures have joined the initiative, including current and former Knesset members, former security officials, as well as prominent academics, entertainers and writers.

In conjunction with the launching of the initiative, leaders of Decision at 50 today sent a letter to Prime Minister Benjamin Netanyahu, asking for a meeting to explain the rationale for the referendum and to lay out the details of the legislation required by the Knesset to put the referendum initiative in motion.

The letter to Netanyahu notes that in the five decades since Israel captured the West Bank and Gaza in 1967, Israeli governments have established expansive and expensive facts on the ground in the West Bank and East Jerusalem in the form of settlements and related infrastructure that siphoned billions of taxpayer shekels.

This de-facto settlement agenda, as well as other practices expanding and deepening the occupation, were taken without any clear policy decision on the future of the Occupied Territories – neither annexation nor separation. “After fifty years, the time has come for us to make a decision in this matter and to clarify, to ourselves and to the world, where Israel is heading and what character we want it to have in the coming years,” the letter says.

The letter continues with an appeal to Netanyahu, demanding that “the government of Israel, headed by you, will initiate a referendum to decide whether Israel ought to strive for there to be two states between the Jordan River and the Mediterranean, in borders agreed upon by both peoples, or should Israel strive for there be one state on the entire territory.”

Americans for Peace Now, the sister organization of Israel’s Peace Now movement, strongly supports the initiative and will act to advance it. APN’s Chair of the Board, James Klutznick said: “This campaign should motivate not only Israelis to have a serious discussion on the future of their rule over the Occupied Territories, but should also stimulate a discussion among us, Americans who care about Israel’s future. As we reach the fifty-year mark of the occupation, we have an opportunity to assert our vision of a future Israel as a true democracy, a Jewish state that proudly fulfills the letter and the spirit of its Declaration of Independence. Let’s embrace that vision of Israel: A nation that rids itself of the political, moral and national security albatross that is the occupation.”

Decision at 50 Press Release: A New Movement Demanding a Referendum on the Fate of Israeli Control over the Palestinian Territories and on the Future of Israel
Media coverage (news and analysis) on Decision at 50
Bibi's gift – and ours
APN Statement Marking 50 Years of Israeli Occupation
Yom Haatzmaut -Israeli Independence Day- a message from Shalom Achshav's director Avi Buskila
Press Release: ICC Investigation’s Message: End the Occupation