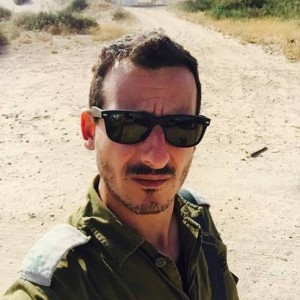 I am very excited at the opportunity to introduce myself to you as the new director of Shalom Achshav (Peace Now).

I was born and raised in the Upper Galilee in northern Israel. I studied in the regional high school in Kibbutz Kfar Blum, and then served in the IDF for 14 years as a combat soldier and a commander. If you follow the Israeli media, you may have seen my name mentioned in the context of my work for civil rights in Israel.

For me, Israel’s Memorial Day and Independence Day are both complex and special. Every year, on Yom Hazikaron, Memorial Day, I mourn the tragic loss of my friends Avraham, Yuval, Ro’i and Ro’i, two dear friends who shared the same first name. Hours later, on Yom Ha’atzma’ut, after a day of commemorating friends lost in battle, I pivot with the rest of the country to celebrate my state and its many achievements. Yet, as I do, I cannot ignore my ever-growing frustration with the fact that our leadership is doing so little to end the ongoing violence and horror that haunts us. They are doing so little to actively pursue peace.

This is a very tough time for progressive Israelis and for Israeli society.

The extreme right is threatening our freedom and equality while many, under the pressure of more rounds of violence and hatred, gradually lose hope in the political vision of two states for two peoples.

But make no mistake: the yearning for peace has not been abandoned. The hope for reaching a life of peace and prosperity with our Palestinian neighbors has not disappeared.

Building on this hope, we are determined to continue to work ceaselessly to make it a reality, to reaffirm the vision that we know is still possible.

We are currently working diligently to advance Peace Now’s influence in Israel. We do it through meetings with people across the country, through actions and partnerships with other organizations and through strengthening the movement as the leader of Israel’s peace camp.

As you know, on June of 2017 we will mark the 50th year of the occupation of 1967. Peace Now is planning a campaign to put the decision over the future of the Occupied Territories in the hands of the Israeli people, who overwhelmingly want peace and support the two-state vision.

I would like to take this opportunity to thank you very much for your ongoing help and support as we strive to secure peace for Israel, to secure it both as a democracy and as a Jewish state.

I am pleased that we have such good friends in the United States, who are willing to roll up their sleeves and work together with us for a better future for Israel and its citizens. I look forward to getting to know you better and to staying in touch.

"8 million prime ministers, 8 million prophets, 8 million messiahs..."
When She's Sixty-four?
Peace Now Director Avi Buskila profiled in YNet
Yom Ha'atzma’ut: Hope
Remembering and Celebrating: Yom HaZikaron and Yom Haatzmaut
David Grossman at the Joint Israeli-Palestinian Memorial Day Ceremony: If the Palestinians do not Have a Home, Israelis will not Have a Home Either
Matching Donation Grant Still Active - "This Is Not A Moment, It's The Movement" - Letter from new APN President and CEO