The New York Times today published the following letter by APN's Chair of the Board Jim Klutznick and its President and CEO Debra DeLee: 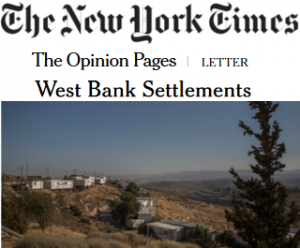 Our organization and our Israeli sister organization, Peace Now, have worked to document and expose this and other settlement-related realities for decades. We do so because settlements are the chief physical obstacle to a two-state solution to the Israeli-Palestinian conflict — a solution that is in the vital interests of both Israel and the United States.

Unfortunately, our own government bears some responsibility for the settlement quagmire. American criticism devoid of consequences can no longer be justified.

It is time for our government to put action behind its words, before settlements and the occupation nullify prospects for a two-state solution.

Mr. Klutznick is chairman and Ms. DeLee is president and chief executive of Americans for Peace Now.