This Passover, jump into the fray 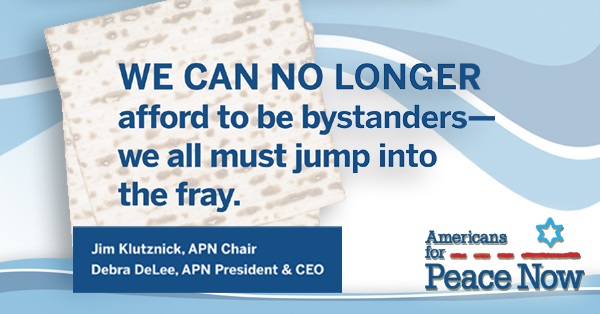 As the Exodus story tells us, the Israelites were faced with a choice at the Sea of Reeds: Enter the waters or stand still and be slaughtered by Pharaoh’s fast-approaching army. 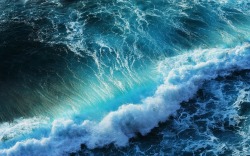 Only one Israelite—Nachshon—had the foresight and the courage to jump into the sea. Jewish tradition says that once he moved forward, the waters parted and Israel was able to walk on dry land to safety.

It sometimes seems that it will take a similar miracle to bring peace to the Middle East.

But Peace Now (Shalom Achshav), the veteran Israeli activist organization, and its U.S. counterpart Americans for Peace Now (APN), aren’t relying on miracles. We believe in moving forward. The wind may not be at our backs, but standing still is not an option.

This Passover, you may observe a traditional Seder and may be blessed by the company of children or grandchildren. They may ask the four questions, one of which is: “Why is tonight different from all other nights?” Yes, we eat matzo; yes, we dip twice; yes, we remember the stranger, but tonight we can no longer afford to be bystanders—we all must jump into the fray.

We “jump” to feed the hungry, to defend the refugee, to protect the environment—now it’s time to “jump” for Israel’s secure future. We want you to be able to tell your family how you helped Israel be the best it can be. Helping ensure a peaceful and secure future for Israel and preserve the Zionist dream does not mean asking how Israel can survive with a Palestinian state by its side. It means asking how Israel can survive without one.

I’ll jump because none of these actions bring added security to Israel. None of this enhances and solidifies Israel’s democracy. Led by right-wing zealots along with Israel’s complicit government, all of these actions make Israel weaker. You don’t need to take our word for it—read the words of the leaders of Israel’s security establishment, like the former head of the Mossad, Meir Dagan.

Dagan, who died in 2016, lamented the diplomatic do-nothing attitude of Prime Minister Benjamin Netanyahu. “It is no coincidence that the overwhelming majority of former Israeli security chiefs—chiefs of staff, heads of Shin Bet and Mossad—concur that we must exhaust every possibility to reach a political settlement [with the Palestinians],” he said. “We know the price of war. We experienced pain of losing commanders and brother-in-arms. I feel this pain every day anew.”

Peace Now’s founders were army officers who loved their country. So it’s no surprise that Peace Now supports a strong Israeli military as a deterrent to the Jewish State’s enemies. But Peace Now also sees negotiated agreements with Israel’s neighbors as the key to lasting peace and security.

The actions of Netanyahu’s right-wing government, however, only serve to undermine any movement toward peace and security for Israel. More than ever, the government and its settler allies are moving to cement a permanent Israeli hold on the West Bank. Whether it’s establishing the new settlement of Amihai as a gift to lawbreaking settlers, seeking to legalize illegal settlement outposts, working to apply Israeli law in the West Bank only for Israeli settlers, or drafting potentially disastrous legislation to annex settlements to Israel, the most right-wing government in Israel’s history is working day and night to entrench the occupation and prevent any possibility of peace.

The Trump administration is no better. Since coming to office, Trump has refused to condemn Israeli settlement expansion—including the establishment of new settlements, a violation of previous agreements between Israel, the U.S., and the Palestinians. This dangerous policy shift should not come as a surprise considering U.S. Ambassador to Israel David Friedman’s avowed support for settlements and the Greater Israel agenda. It’s even been reported that Friedman has pressured the State Department to stop using the term “occupation.”

Trump’s decision to unilaterally move the U.S. embassy from Tel Aviv to Jerusalem prior to reaching an Israeli-Palestinian peace deal—and without the U.S. or the Palestinians receiving anything in return—was a reckless, destructive decision driven by little more than the desire to appease a narrow political base. This action has only served to further damage the perception of the U.S. and Israel around the world while pushing U.S.-Palestinian relations to a new low. 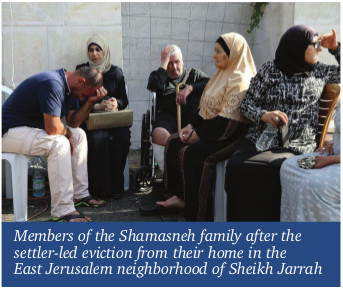 But APN and Peace Now are not standing still. We’re taking a stand against the settler-led evictions of Palestinians in East Jerusalem. Last year, Mohammed Shamasneh, along with his wife, parents, and six children, was kicked out of his home in the East Jerusalem neighborhood of Sheikh Jarrah. Only a few hours later, right-wing settlers occupied his home of 45 years. With our new crowdfunding campaign, “Shelter for the Shamasnehs,” APN and Peace Now are raising money to bring the scattered Shamasneh family back together under one roof in their home city.

We’re not stopping there. APN is also fighting back against settlement expansion in the West Bank. We will launch a new, upgraded version of our “Facts on the Ground” settlements map app for iPhone and Android. This dynamic, interactive app will help spread comprehensive facts about West Bank settlements to all who seek it— students, teachers, policymakers, journalists, and more—providing the history, data, statistics, and updates that are vital to all those working to counter settlement expansion.

We are doing our part but we realize there is so much more to do. Now is the time to follow Nachshon’s example of courage and foresight, the time to dive into uncertain, choppy waters and push forward no matter what. Just jump!

We turn to you now and ask, with urgency, that you renew or start your support for our work. Now, more than ever, it matters. Your tax-deductible contribution will support APN’s mission to fight for a two-state solution, inform the public of why it remains the only viable solution to the Israeli-Palestinian conflict, and bring an end to the occupation that—far from being a simple matter of security for Israel— serves as a cover for land-theft and brutality.

We thank you and wish you a joyous holiday.

P.S. Help us bring in just one new donor. Our goal is to add 2,000 new supporters this year. We can do this with your help. Find this letter on our website at www.peacenow.org/Nachshon and please forward to a friend.

Jim Klutznick, Board Chair of Americans for Peace Now, has served on the APN Board since it was founded in 1981. A native of Chicago, Mr. Klutznick grew up in an environment of public service and Jewish community activism, and has been involved in Jewish public life for many years. A graduate of Princeton University and a US Air Force veteran, Mr. Klutznick is co-founder and Vice Chairman of Senior Lifestyle Corporation, a national senior housing development and management firm.

Debra DeLee, Americans for Peace Now President and CEO, has worked tirelessly for the past two decades to promote American support for peace in the Middle East. On behalf of APN, she regularly discusses peace process issues with Israeli and Arab leaders—including heads of state—in Washington, Israel and Arab countries. Prior to joining APN, Debra was a leader in the national Democratic Party and was appointed DNC Chair by President Clinton in November 1994.

Fatigue? Fuggetabout it. Letty Cottin Pogrebin is inspired!
It's not about the oil, it's about the light
Sheldon Adelson puts his money where his mouth is.....
APN Update - Are you kidding, Ambassador Friedman?! Try PeaceCast, and Please remember us!
Resist the policies of Netanyahu and Trump
APN Update - APN action on Trump and Conf. of Presidents, Briefing Call with Sen. Mitchell, Letter from Israel, and more
APN Weekly Update - Bresler calls out the occupation, Alpher calls out the new NGO law, Iran deal a year later, and more