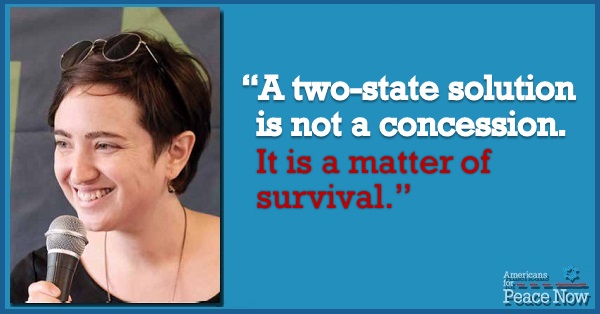 On a wall at APN’s Washington office, there’s a Hanukkah poster that we produced years ago, which says, “It’s not about the oil, it’s about the light.” The idea was that the true miracle of Hanukkah was not the Maccabees finding an extra pint of oil, but their using it to generate the light needed at a time of severe adversity.

Today, still, it's all about the light.

Both in the United States and in Israel, we are facing ever increasing darkness in the public sphere, a growing cloud of ultra-nationalism, bigotry, and intolerance. Both here and there, we must increase the light to fight the darkness.

For me, one of the greatest sources of light in Israel is Shaqued Morag, the new, young, energetic, and charismatic leader of Israel’s Peace Now movement. She, her colleagues, Shalom Achshav’s volunteer activists, and the hundreds of thousands of Israelis who support the Israeli peace movement’s goal of two sovereign nations, Israel and Palestine, are a shining light and a beacon of hope.

Here in the U.S., it is incumbent upon us to be the light, to emulate and complement what Shaqued and her friends are doing in Israel, and to support them as they intensify their fight against the Israeli right and against the occupation.

Please turn up the light by reading Shaqued’s following letter and by joining me in generously donating to support her and her fellow Peace Now Israelis. I will match your donation, up to $15,000, through the eight days of Hanukkah. 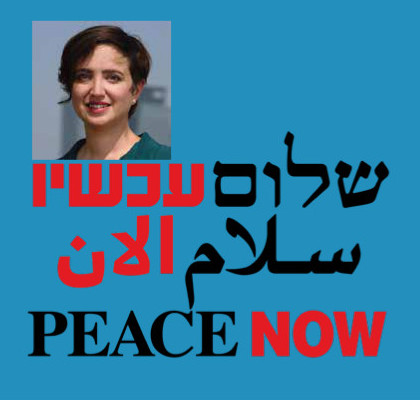 This is precisely the time for us to redouble our efforts, to assert our vision and our hope, and to challenge both Trump and Netanyahu as they collude to destroy prospects for future Israeli- Palestinian peace. We won’t let them destroy our future. The vision and quest for peace, security and normality of my fellow Israelis — Jews and Arabs — are stronger than self-indulgent politicians.

Letter from Shaqued Morag, Peace Now's New Executive Director
A new peace generation shall lead
"A beacon of hope" - Message from APN Board Member Richard Gunther
$6,000 gets us to our goal. Download and support this app!
Peace Now's Shaqued Morag: "Good News from Israel"
Peter Edelman: "Join me in honoring the Gunthers and the work that APN does"
Shavuot - "Choosing Hope" from Jim Klutznick, APN Chair