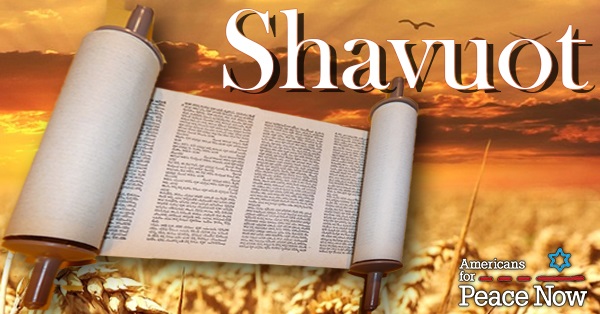 As we approach the holiday of Shavuot we are faced with a choice: Do we choose hope, or do we choose fear?

Choosing fear removes "us" from the equation and makes us live in a way where there is no choice but endless war and occupation, and continual settlement building where this all becomes a fait accompli. Hope, on the other hand, puts "us" back into the equation, believing that Israelis can build a secure home for themselves, living in peace with their neighbors.

I choose hope not because I'm some wide-eyed optimist, but because I want urgent action. We are commanded to build a moral and ethical society, and there's no better holiday to remind us of this than Shavuot, which commemorates the Jewish people receiving The Torah—The Law. The Torah is summarized by Rabbi Hillel this way: "That which is hateful to you, do not do to another. That is the whole Law. The rest is commentary. Now go and learn."

Hillel's words are the words that I abide by, and they are metaphorically the mission statements of both Shalom Achshav and Americans for Peace Now. It is their urgent work that gives me hope. Work, I'm sure you are all familiar with.

But today, I want to bring your attention to someone who embodies the spirit of Hillel's words in mind and deed: Barbara Green. Barbara has been volunteering for APN, in Washington, DC, for nearly 20 years. Coming in virtually every Wednesday, she is put to the task- from writing Peace Parshas to making year-end phone calls to donors, and more. Barbara does every job knowing she can't and won't quit. And at 86 she's not slowing down either—she's currently helping APN organize its upcoming study tour to Jordan and Israel. Don't be surprised if you get an e-mail or call from her.

Barbara's devotion to our cause is also personal and hits "home." Her son, a Torah scholar, lives with his family in a religious town just over the Green Line. The commitment both Barbara and her son have for each other should serve as a lesson to all of us and even to those who disagree with APN--we are all family. Barbara's son also acknowledges that if there was a peace treaty, and his family was asked to evacuate; they would do so. That's Barbara's influence on her son!

I have to add that Barbara occasionally misses a Wednesday or two not for any gratuitous or trivial reason—she studies Torah. She's a fixture at Temple Micah in D.C. where she is a member and where she learns. One would think that this is Barbara's son's influence on her. It works both ways as it should.

Last year for Shavuot, Barbara wrote a beautiful D'var Torah titled: "Let's be mindful of the need to live in a just and humane society." It can be found here. In it, she asks: Are we still the people of justice and compassion set forth in the Law? We can't be passive thinking this is the case and it will just happen. This is why we need APN and more Barbara Greens. It requires action and work.

I salute Barbara, an APN family member, and will make a contribution up to $18,000 in her AND her son's honor. Since we are all family, I’m asking that you help me get to this goal—I will match your donations up to this amount. Hold me to it, please.

P.S. I ask you to contribute in honor of not quitting, in recognition of learning, and in honor of Barbara. Shabbat Shalom and Chag Same’ach.

"A beacon of hope" - Message from APN Board Member Richard Gunther
Peter Edelman: "Join me in honoring the Gunthers and the work that APN does"
Listen: Briefing Call - Undermining Peace: The Silwan Tunnel and the Trump-Netanyahu Jerusalem Policy (Thurs, 7/11, 2pm EST)
Peace Now's Shaqued Morag: "Good News from Israel"
What Peace Now does best, from Shaqued Morag, Peace Now Director
APN In the News: July 27-August 03
APN In the News: August 18- August 24