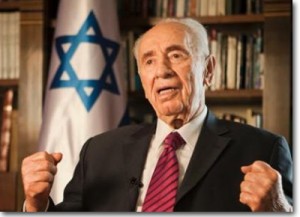 Americans for Peace Now (APN) mourns the death of Shimon Peres, the former president and prime minister of the State of Israel, an icon of Israel's founding generation, a visionary of peace and security for Israel, a dedicated leader who led Israel through wars and in the quest for peace.

APN's President and CEO Debra DeLee said: "Shimon Peres has been a fixture in Israeli public life since the inception of the Jewish state. He held almost every possible senior position in government, and left his mark on every aspect of Israeli public life – security, foreign relations, the economy, technology, culture and the arts. He was a renaissance man, with unmatched intellectual curiosity and a passion for advancing peace and security for Israel. Peres' understanding of Israeli national security extended from military might to the arts, from technology to transportation and social justice.

"As the sister-organization of Israel's preeminent peace movement, Shalom Achshav (Peace Now), APN salutes President Peres for his indefatigable efforts to advance peace between Israel and its neighbors and for his invaluable contribution to Israel's security.

"Shimon Peres' memory and legacy are a blessing to anyone who cares about Israel and its well being as a democracy that is guided by progressive values."