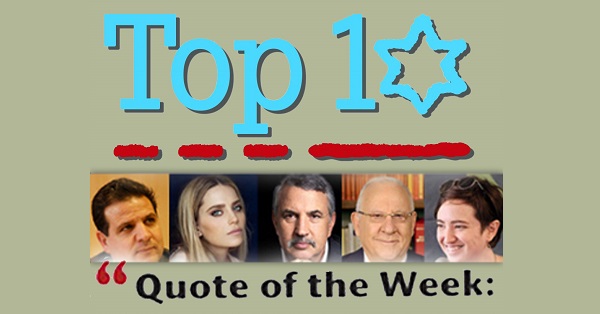 Here are 10 selected quotes from APN's 2019 Updates, emailed each week:

"When the hell will someone in this government broadcast to the public that Israel is a country for all its citizens. And every person was born equal. Arabs, too, God help us, are human beings. And so are the Druze. And so are gays, by the way, and lesbians, and...shock...leftists." (March 13, 2019)

Rotem Sela, popular Israeli actress and TV host, in an Instagram post to which Prime Minister Netanyahu replied "Dear Rotem, an important correction: Israel is not a state of all its citizens. According to the Nation-State Law that we passed, Israel is the nation-state of the Jewish People - and them alone."

"The U.S. ambassador to Israel, a former Trump bankruptcy lawyer, is so enthralled with the right-wing Jewish settler movement that he is more a propagandist than a diplomat ... the U.S. and Israel seem to be engaged in a search for the best one-state solution, meaning permanent Israeli security control over the West Bank and East Jerusalem, along with some form of deep Palestinian autonomy"   (March 20, 2019)

"...Prime Minister Benjamin Netanyahu spoke to me and he said he is willing to withdraw from the occupied territories and also to cancel the nation-state law, and that he supports not only civil equality but also national equality, and that he's willing to recognize the Nakba and fix the historical wrong - in return for the immunity law, and a law that would curb the High Court's power."  (May 30, 2019)

Ayman Odeh, Knesset Member and Head of the Hadash Party, mocking Netanyahu's efforts to form a coalition government at all costs, particularly one that will give him legal immunity.

"The Bahrain Conference is a sham. The main problem with the Palestinian economy is a political one: the occupation... The Israeli interest is a two-state solution. A good and creative economic plan cannot exist without a solution to the core issues (security, borders, settlements, Jerusalem, etc.) that can only be answered if a Palestinian state is established alongside the State of Israel." (June 27, 2019)

Peace Now, in a statement regarding the US-organized "Peace to Prosperity" workshop in Manama, Bahrain. 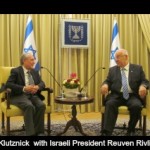 "The link between us is between peoples, based on historical ties, deep, strong friendships and shared values, not dependent on the links with either party." (August 21, 2019)

Reuven Rivlin, President of Israel, after a phone call with Speaker of the House Nancy Pelosi following the assertion by President Trump that voting for a Democrat is disloyal to Jewish people and to Israel.  (Picture: Rivlin with APN Chair Jim Klutznick during an APN Israel Study Tour)

"...most Israeli citizens favor a solution guaranteeing peace and security over the ideological, Greater Israel one-state vision, which would spell an end to Israel's democracy." (August 29, 2019)

"Every time I take my youngest daughter, Sham, to her school, I see a passage written on the wall from the Book of Psalms: 'The stone that the builders rejected became a cornerstone.'" (September 25, 2019)

Ayman Odeh, head of the Israeli Joint List Party, in the historic announcement in his NY Times opinion piece We Are Ending Netanyahu's Grip on Israel in which he recommends that Benny Gantz of the Blue and White party be the next prime minister.August 29  (Picture: Odeh speaking during an APN Israel Study Tour)

"...this decision undermines the safety of both Israelis and Palestinians and undercuts any prospect for a two-state solution. This flagrant disregard for the U.S. role as an honest broker in this conflict further undercuts both U.S. leadership and credibility, and it must be reversed." (November 20, 2019)

“Don't listen to those who hysterically charge that it is 'anti-Israel' for American leaders to oppose the occupation or warn against annexation. Today, it is among the most pro-Israel things the US can do." (November 26, 2019)

"This is very bad news for Israel: bad morally, bad for the security, and bad in terms of the political chances for peace." (December 11, 2019)