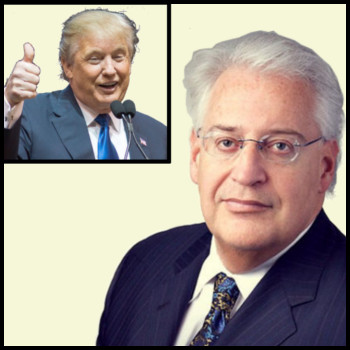 APN's Lara Friedman in The Hill newspaper 1/26: David Friedman is the wrong choice for US ambassador to Israel

Ambassador-nominee David Friedman, In His Own Words [compilation of quotes with links to original sources]

Yossi Alpher weighs in, in his Hard Questions, Tough Answers: US-Israel in the Trump era: Ambassador Friedman and a US embassy in Jerusalem

1. You serve as president of an organization that fundraises for the settlement of Beit El. How much of your own money have you donated over the years to Beit El and does your personal investment in the settlement movement explain your opposition to a two-state solution?

2. It has been reported that you own at least one apartment in Jerusalem. Is that the only real estate you own in Israel, and if not, could you provide us with a list of all your properties in the country and tell us if you own any real estate over the Green Line?

3. Do you have any children who live in Israel, and if so, have any of them served or intend to serve in the Israeli army? If the answer is yes, are you not in conflict of interest as a representative of the U.S. government?

4. Have you ever contributed to the campaigns of Israeli political leaders or political parties? If so, could you specify which leaders and which parties and how much you gave them?

5. Do you believe it is important for Israel to remain a Jewish and democratic state?

6. Do you favor Israel’s annexation of the West Bank, and if so, do you believe that Israel can remain a Jewish and democratic state if that happens?

7. As a real estate lawyer, how do you view the new Israeli law that legalizes the expropriation of Palestinian land in the West Bank?

8. President Donald Trump has said that making peace between Israelis and Palestinians is a top priority for him and has even referred to this as “the ultimate deal.” What would be your basic principles for such a deal?

9. Palestinians have voiced serious concerns that with your views, you cannot serve as an honest broker in any future peace talks. How do you hope to reassure them otherwise, if at all?

10. Your use of terms like “kapos” and “morons” to berate respected Jewish organizations has raised serious questions about your suitability for a diplomatic role. Do you truly believe you are cut out to serve as an ambassador?