Shortly before midnight on June 2nd, the remarkable Sara Ehrman - longtime Board member, leader and a founder of APN - died at age 98.

If you knew Sara, you know that there never was and will never be anyone else like her. She led a full and meaningful life, full of friends, family, humor, and purpose. She was smart, funny, courageous, frank, irreverent and generous. 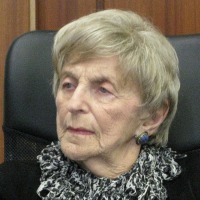 Her life reads like an historic novel, full of twists and turns, adventure, tragedy, suspense and mystery, winding through many countries and giving us a glimpse of the politics, social mores, values and traditions of the almost-10 decades she experienced. And she experienced them all with gusto. And she remembered all of it, in great detail, from the death of her mother when she was very young, to every political campaign she worked on, to the name of every stop on the Staten Island railroad. She could delight with stories - about meetings with kings, travels with presidents, trips with her sons or her "girlfriends", all of them fascinating, all of them funny, all of them leaving you wanting more.

She would share often that one of her very early mentors told her that there would never be peace for Israel until there was peace with the Palestinians. She embraced that idea and committed much of her life to working towards that end. She was one of the earliest founders of Americans for Peace Now and remained an active Board member and leader until her death, constantly amazing the Board with her wisdom, or regaling us with her wit. She was the driving force behind APN developing a Washington-based government relations program to educate members of Congress and the White House. Interestingly, before APN, while a staffer at AIPAC, she developed the 48-state strategy that AIPAC follows to this day, going into states and convincing the Jewish power structure of the importance of having a strong Jewish voice in Washington.

She was front and center for the signing of almost every major peace agreement, not for the glory, but because for her it was a glorious move towards peace for the Israel she loved. In recent years she came to the conclusion that Netanyahu had no intention of ever relinquishing control of the West Bank, that Israelis themselves had to choose peace. Throughout her evolving thoughts on the prospects of peace, she never gave up her strong support and love of APN and Peace Now in Israel. And she never relinquished her role as sage advisor to Danny Abraham and the folks at his Center for Middle East Peace.

Everyone knows the story of how Sara drove across the country with then-Hillary Rodham en-route to marry Bill Clinton. Sara spent the entire four days telling her not to do it. "He's a small-time governor from a state nobody heard of. He's going nowhere. Don't do it," she repeated endlessly. She loved to share this story. Sara was never without a story, and her stories never failed to delight, or enrage or sadden. She never left an audience ambivalent.

Sara’s capacity for friendship was unbounded. Her friends crossed generations, nations, race and gender. She didn't suffer fools lightly, but if you were her friend, you "knew" you were her BEST friend. Hundreds of us wore the mantle of being Sara's best friend with pride. And she was an honest friend. If your phone conversation outlasted its interest for her, she would simply say (while you were mid-sentence) "I'm done talking to you", and hang up. If you were whining with self pity, she would cut you off with "Everybody's got a story." But if you needed advice, a hug, a sounding board, a laugh, she was always there to give generously, even if it was to tell you to "straighten up".

She had elegance ("this” schmatte?"), eloquence, and the mouth of a sailor. Most importantly, she made a difference in this world - in ways affecting nations, and in ways that touched each one of us who knew her. And she did it all with style and beauty and chutzpah. She will be greatly missed.  Her memory will be a blessing.

"I'm hanging up now" -- Remembering Sara Ehrman
The best deal on Black Friday is hope
Leonard Fein, Mik Moore
I KNOW where you live: A Purim message from Sara Ehrman, APN Board member
APN's "What Would Leibel Do (WWLD)?" Awards Dinner - Boston