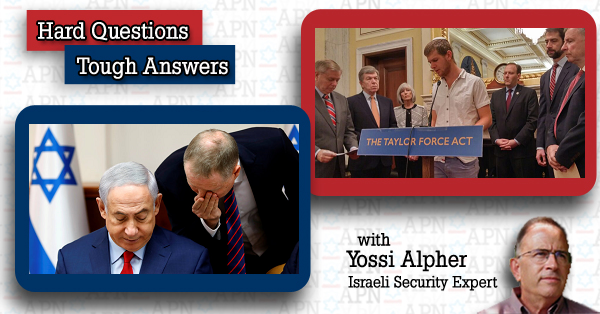 This week, Alpher discusses China's proposal for Israeli-Palestinian peace; why Beijing bothered with the proposal; Kushner and Greenblatt's upcoming trip to the region; their visits to Egypt and Jordan; and Netanyahu's frequent employment of Orthodox American Jewish immigrants to Israel in trusted senior positions.

Q. On July 31, China presented its own proposal for Israeli-Palestinian peace. Is there anything new or innovative here?

A. What is new is the very fact that Beijing deems it necessary to be seen as being involved. The proposal itself offers little by way of innovation and seemingly left little impression on Jerusalem and Ramallah.

The proposal seeks to “advance the two-state solution based on 1967 borders and East Jerusalem as the capital of a new Palestinian state”. It calls for “immediately ending Israeli settlement building”, ending violence against civilians and an “early resumption of peace talks”. The rest is more of the same motherhood and apple pie staples of any peace process: the need for security, “joint participation”, and “peace through development”.

In addition, China’s United Nations ambassador proposed involving China in the dialogue business: a “China-Palestine-Israel tripartite dialogue mechanism . . . to coordinate the implementation of major assistance programs in Palestine”, and a seminar for Israeli and Palestinian peace activists this year to “contribute wisdom for the settlement of the Palestinian question”.

Last month, during a visit to Beijing by Palestinian leader Mahmoud Abbas (Abu Mazen), the Chinese claimed to be organizing a Middle East peace conference for later this year.

Q. There really is nothing new here. Why does Beijing bother?

A. Two reasons come to mind. First, Beijing’s ambitious “belt and road” or new silk road global mega-project has an Israeli dimension: a possible train route to carry goods between Eilat and Ashkelon that would parallel and compete with Egypt’s Suez Canal, along with heavy investments in Israeli educational institutions specializing in advanced technologies like the Technion.

“Belt and road” involves major Chinese infrastructure investments in ports, roads and railroads in many Asian, African and Latin American countries. The objective is to facilitate import of raw materials and export of finished goods by China’s huge industrial economy. An ongoing Israeli-Palestinian conflict could get in the way. Also, there is criticism in Israel of China’s investments here, lest they mortgage Israeli innovation and environmental issues to Chinese interests. Paying lip service to an Israeli-Palestinian peace process is a cheap way to improve Beijing’s public relations.

Secondly, Beijing has presumably taken the measure of the Trump administration and decided that it really does not have a serious plan for Israeli-Palestinian peace. To the extent this is true, better for the PRC to place itself at the forefront of regional peace efforts. That’s good public relations too even if, as is likely, no peace process emerges from the Chinese initiative.

Q. Trump has no serious plan? But Jared Kushner and David Greenblatt are on their way back to the region at the end of August . . .

A. This will be Kushner’s third visit since his father-in-law assumed the presidency, and Greenblatt’s eighth. Beyond pushing a few long-planned programs for “economic peace” such as improved supply of Israeli electricity for the northern West Bank, the Kushner-Greenblatt team has made no known progress toward developing a direct Israeli-Palestinian peace dialogue--their declared objective. Indeed, since their last visit Palestinian leader Mahmoud Abbas has weighed in with remarks reflecting a growing lack of confidence in the American effort.

So this visit, with its strange timing at the height of vacation season, could be little more than a routine way of punching the Middle East clock and reminding the parties to behave themselves because Trump is watching.

Further, given that Kushner and Greenblatt are also traveling to Saudi Arabia, the UAE, Qatar, Jordan and Egypt, their real intent could be to deal with a few more solvable crises. One is the Saudi and UAE-engineered boycott of Qatar that is generating dysfunction among the Gulf emirates and pushing Doha into the Iranian camp. This is one crisis Trump cannot even try to blame on Obama. Indeed, it broke out shortly after Trump’s May 2017 visit to Riyadh, where he sent signals that were interpreted by the Saudis as a green light to wage economic warfare against Qatar because it “supports terrorism” and is friendly with Iran.

Q. That leaves the visits to Egypt and Jordan. Can you explain them?

A. First of all, the US, Jordan and Israel are closely coordinating with Russia the development of a ceasefire or de-escalation zone in southwest Syria near the Syria-Jordan-Israel border triangle. Note in this context the presence in the US delegation of Deputy National Security Adviser for Strategy Dina Powell. She might plan to deal with this issue as well as Egypt’s security problems with a Sinai-based branch of ISIS that has influence in Gaza and worries Israel too.

Apropos, the US team will also hopefully inquire in Cairo, Jerusalem and Ramallah about the ever-worsening situation in the Gaza Strip. Israeli security experts are now telling PM Netanyahu that the Gaza humanitarian crisis--overpopulation, water and electricity shortages, sewage pollution--predicted by the United Nations for 2020 is already upon us in 2017. The need to distract the attention of two million Gazans from this crisis could be one trigger for renewed Hamas aggression against Israel. Another potential trigger is the subterranean anti-tunnel barrier Israel has begun constructing. If Gaza is not prominently on the Kushner-Greenblatt Palestinian agenda, it should be.

Another more solvable crisis is Israel’s empty embassy in Amman. The July 14 Temple Mount crisis in Jerusalem led to a stabbing and shooting incident in that embassy and caused PM Netanyahu to return all embassy staff to Jerusalem. It is now clear that he had no cause to bring anyone home other than the security official involved in the incident. But Jordan’s King Abdullah II, still fuming over Netanyahu’s mishandling of both the Temple Mount and embassy crises, refuses to allow the embassy staff to return until he is satisfied that justice is being administered in the stabbing/shooting incident.

As if the Amman situation were not bad enough, the Israel embassy in Cairo has not been manned for nine months, since a security threat caused the evacuation of the diplomatic staff. While Israel’s security relations with Jordan and Egypt are excellent, the absence of Israeli diplomatic representation in those countries is a vexing step backward in Israel-Arab relations. If Kushner, Greenblatt and Powell can help out here, they will have earned their flight tickets.

A. It’s a sensitive issue, and to the best of my recollection Netanyahu has never been asked to explain the hiring of Orthodox American Jewish “olim”, some of whom had little experience in governance, politics or strategic issues prior to being given sensitive duties by the prime minister. To be fair, Americans are not the only immigrants hired by Netanyahu: Soviet-born Avigdor Lieberman began his career in Netanyahu’s entourage. And Netanyahu has appointed non-Orthodox American immigrants like Michael Oren (former ambassador to Washington, now deputy minister in the PM’s office) as well. Then too, there are of course plenty of native Israelis around Netanyahu.

But why the Americans? As a veteran (55 years) immigrant from the US myself who has filled Israeli government positions, I can hardly complain or criticize. I recall when Dore Gold (also Orthodox and American by origin) was appointed as an advisor in Netanyahu’s first term as prime minister (1996-99). There was vocal criticism by Netanyahu’s detractors on the left: Gold was too inexperienced, too “green”, not Israeli enough. I felt slighted, and spoke up in Gold’s favor, demanding that he be judged by his views and his performance, not his immigrant status. Gold went on to a long and distinguished career. I still disagree with his politics, but that is hardly the point.

Still, with so many by-now familiar names confronting us--Gold, Harow, current ambassador to the US Ron Dermer, who replaced Oren--it is intriguing to consider what Netanyahu’s criteria for appointing them may be.

First, they “owe” him seriously for their dramatic advancement and induction into the Israeli policy elite; ostensibly this guarantees loyalty. (Except it doesn’t; witness Harow’s readiness to turn state’s witness against Netanyahu to save his skin and Lieberman forming a party that competes with the Likud). Second, educational background: Netanyahu studied at MIT, Gold’s PhD is from Columbia, Oren’s from Princeton. Here we have solidarity among graduates of elite American universities.

Third, “values”. While Netanyahu is not Orthodox and is not known to be particularly religious, politically he seems to be attracted to people with the religious Zionist values and Republican affiliation he promotes through his policies. And fourth, English. On a one-on-one basis, Netanyahu and these Americans apparently communicate in English, not Hebrew. This is apparently Netanyahu’s comfort zone. There is nothing wrong with any of this. But it is of interest in understanding who Netanyahu is.