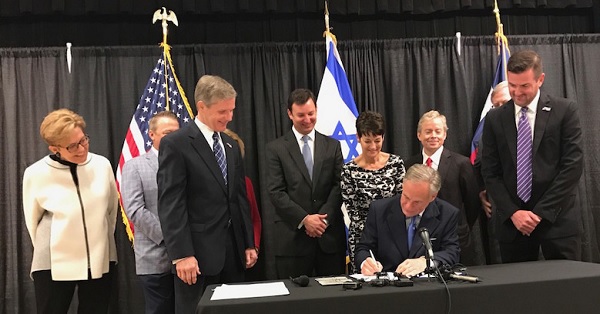 Americans for Peace Now is deeply concerned at the increasing pace with which state governments are adopting legislation that conflates Israel and the occupied West Bank, and denies American citizens their constitutional right to protest the occupation through boycotts.

While opposing boycotts, divestment and sanctions (BDS) that target Israel, APN supports boycotting Israeli settlements in the West Bank as a legitimate way to protest the settlements and the occupation. APN also believes that fighting BDS should not require – or justify – eroding constitutionally-protected rights to free speech and political protest.

Over the past couple of weeks, the pernicious impacts of state anti-BDS legislation have begun to come into clear view. Esther Koontz, a Kansas math teacher and trainer, was selected as a contractor in a statewide teacher training program administered by Kansas’s Department of Education. The contract with which she was presented mandated that she certify that she does not boycott Israel, including boycotting companies profiting from settlements in the Occupied Territories. The teacher is a member of the Mennonite Church and follows the call by her religious denomination to avoid purchasing goods and services from Israeli companies and international companies doing business with Israeli settlements. As a result, the Kansas Department of Education informed Koontz that she would be excluded from participation in the teacher training program. Kansas enacted its anti-BDS legislation in June, when Governor Sam Brownback signed the Kansas law prohibiting BDS against Israel and West Bank settlements. The ACLU has filed a lawsuit arguing that Kansas’s law violates the First Amendment rights of state contractors such as Koontz.

Meanwhile in Texas, residents of the city of Dickinson discovered that in order to apply for hurricane relief from the Dickinson Harvey Relief Fund, they would have to complete an application certifying that they do not and will not boycott Israel or Israeli settlements in the West Bank for the duration of their contract to receive money from the Fund. In light of the ensuing backlash, Representative Phil King, author of the Texas legislation, engaged in damage control by arguing that Dickinson officials had misapplied the Texas law. The Dickinson City Council reacted by removing the anti-boycott requirement for individuals, while continuing to mandate that businesses declare their non-participation in Israel and settlement boycotts in order to receive hurricane relief.

As the impact of state anti-BDS legislation became clear in Texas, Maryland Governor Larry Hogan on October 23 signed into law by Executive Order an anti-BDS/pro-settlements law that failed to pass the Maryland legislature. Wisconsin Governor Scott Walker followed suit on October 27, issuing his own Executive Order, making Wisconsin the 23rd state to enact such a law. Meanwhile at the federal level, Senator Ben Cardin of Maryland has indicated willingness to “clarify” his pending federal anti-BDS legislation after concerns that the measure would violate free speech protections led some to pull their support.

APN’s President and CEO Debra DeLee said: “BDS against Israel is wrong and should be opposed, but not through legislation. This legislative avalanche across the fifty states is not only trampling free speech but is also severely hindering the effort of pro-Israel organizations such as ours to differentiate between the State of Israel, which we love and support, and its occupation of the West Bank, which is destroying Israel as a democracy and a Jewish state.”

For a wealth of information and analysis on anti-BDS legislation, on both the federal and state levels, see APN’s compendium of resources here and here.