At ZOA Gala, Ambassador Friedman Shows Again Why He Should Be Fired 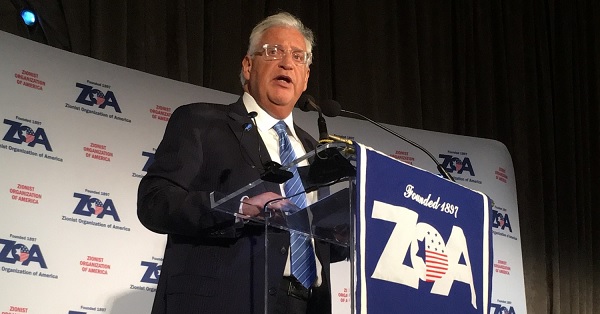 In a speech at the Zionist Organization of America’s annual dinner, David Friedman showed, once again, why he should be removed from his post as US Ambassador to Israel.

The shamefulness of Friedman’s appearance stems in part from the despicable company with which he associated himself. Featured prominently at the ZOA gala were the likes of Steve Bannon and Sebastian Gorka. In his speech, Bannon proclaimed himself to be a “Christian Zionist” even as he employed common anti-Semitic dog whistles, like characterizing his opponents as the “permanent globalist class.” Bannon received enthusiastic cheers from the ZOA crowd, who represent the far-Right fringe of American Jewry, and was “proudly” welcomed by the organization’s president, Morton Klein. Sebastian Gorka, formerly a prominent Trump adviser who The Forward has identified as a member of extremist Right-wing Hungarian organization Vitezi Rend, was seated at the head table. Other notable attendees included Sean Spicer, who famously dubbed concentration camps “Holocaust centers” and claimed that Hitler did not use chemical weapons against his own people, conspiracy theorist Jack Posobiec, and alt-right gadfly Laura Loomer.

As contemptible as the company Ambassador Friedman kept at the ZOA fête was, it was his own remarks after receiving an award for “outstanding diplomacy” that illustrate – once again – why he should be fired.

Apparently, no one has told Friedman that ambassadors are diplomats who represent the interests of the countries they serve, rather than engage in partisan attacks. Friedman used his platform to attack former President Barack Obama, referring to “the dark days of last December” when Obama committed “perhaps the greatest betrayal of Israel by a sitting president in American history.” This is a patently false smear, as APN pointed out when President Obama took the courageous decision not to exercise the US veto against UN Security Council Resolution 2334, which reaffirmed the status of the West Bank and East Jerusalem as occupied territory and urged countries to maintain a distinction in all their dealings between Israel within the Green Line and West Bank settlements. On the watch of every other American president since 1967, the US abstained on or even voted for multiple Security Council resolutions critical of Israel. In eight years, Obama did it once.

One would think no one should have to tell Ambassador Friedman that his job is to represent the United States. Yet, Friedman seems confused on this point. He had no trouble rehearsing Israeli Prime Minister Benjamin Netanyahu’s top three foreign policy priorities (hint: Iran, Iran, and Iran). And Friedman took pains to brag that “there is no daylight between the United States and Israel” when it comes to Bibi’s anti-Iran agenda. By contrast, there was no discussion about an American foreign policy agenda or strategy, no indication of what a Trump peace plan might look like, and certainly no embrace of the two-state solution, to which Friedman has been doctrinally opposed.

Sign our petition calling on President Trump to endorse the two-state solution.

A long-term supporter of settlements, Friedman declined to utter this word in his remarks. Using the Biblical terminology of Judea and Samaria when referring to the West Bank, Friedman spoke of “building a house in the Samarian village of Halamish” as a quotidian act. In fact, this settlement deep in the occupied West Bank near Ramallah and others like it threaten the prospects of Palestinian statehood and thus a resolution to the Israeli-Palestinian conflict.

At an event at which prominent figures with ties to the alt-right were well-represented, Friedman used the Holocaust to establish beyond question the pro-Israel bona fides of himself and others in the Trump Administration. Because Jared Kushner is the grandson of Holocaust survivors, “he doesn’t just understand the importance of the US-Israel relationship, he feels it profoundly within his heart,” said Friedman. And Friedman began his speech with the story of his 15-year-old daughter who had just sent the family a picture of herself on a class trip to Auschwitz, wrapped in an Israeli flag. Said Friedman, “No picture better represents who we are, what we are, and what we are fighting for.” Just who is the “we” to whom Friedman refers? Is it the American people, who are not only Jews, of course, but people of indigenous, Italian, Irish, German, and (dare we say) Arab heritage?

In focusing on the outrageous presence of Bannon and his cronies at the ZOA gala, it would be easy enough to miss the significance of Ambassador Friedman’s appearance and remarks there. That would be a mistake.

APN is proud to lead the way in calling on President Trump to fire him. Join us.

APN's Debra Shushan in Haaretz: David Friedman Is Unfit to Be U.S. Ambassador to Israel. Fire Him.
NEW ITEM - halting annexation is but a "temporary suspension" - The Friedman File: APN Watch on US Ambassador to Israel David Friedman
Friedman Watch
Action Alert: Tell Trump to fire Ambassador Friedman
APN is fighting back
APN Condemns Appointment of Bannon, Calls Out Jewish Groups for Failure to Stand Against Anti-Semitism & Hate-Mongering
Action Alert: Tell Your Senator to Vote Against the Confirmation of Mike Pompeo