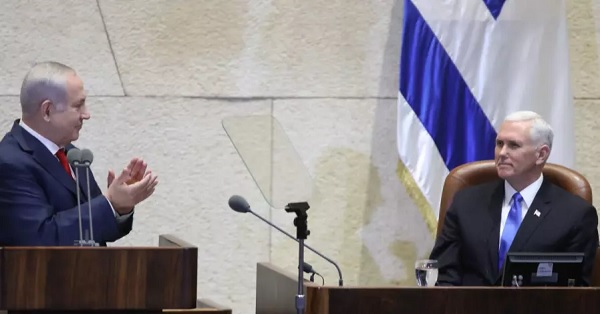 There is no reason to rejoice in Vice President Mike Pence's visit to Israel, which commenced yesterday and will continue through tomorrow. It is clear that Pence has come to Israel to pursue his own domestic political agenda, cynically politicizing the US-Israeli relationship to pander to his evangelical Christian base.

In his speech to the Knesset, Pence told Israeli lawmakers that "America stands with Israel." While the US-Israel bond is vital, so are the building blocks on which that bond is constructed.

Historically, that bond has rested on shared democratic ideals and national security interests. Today, however, democracy in the US and Israel is under assault by the shared illiberalism of the Trump and Netanyahu Administrations. And the decision by President Trump to move the US embassy to Jerusalem and recognize the city as Israel's capital outside the context of an Israeli-Palestinian peace agreement has nothing to do with US national security. In fact, it endangers it.

Vice President Pence seems to view the US-Israel bond through a messianic religious prism. While his own worldview is shaped by his evangelical Christianity, using religion as a basis for US foreign policy is dangerous. One potential ramification of doing so is to cast increasingly the Israeli-Palestinian conflict in religious terms, rather than the conflicting political and territorial claims for which a solution is much more tractable.

Pence's planned official visit to the Western Wall tomorrow is problematic both because of its religious symbolism and because it appears to imply that American recognition of Israeli sovereignty extends into East Jerusalem.

Debra DeLee, the President and CEO of Americans for Peace Now, stated, "To our great dismay, Vice President Mike Pence's trip to Israel is doing nothing to re-establish the reputation of the United States as an honest broker in the Israeli-Palestinian conflict. Rather, Pence, an architect of Trump's Jerusalem decision, doubled down on the US embassy move to Jerusalem by informing the Knesset that the move will occur on an accelerated timetable – despite possible security risks to US personnel.

"While Pence paid lip service to peace, he provided no indication of how the US intends to advance toward that vital goal. Pence called upon Palestinians to return to negotiations but was silent on Israeli settlements and the occupation of the West Bank. In fact, the US embassy in Tel Aviv, under the leadership of settlements-enthusiast Ambassador David Friedman, reportedly issued invitations to settler leaders to attend Pence's speech.

"The Trump Administration is doing major harm to prospects for peace. We call on President Trump and Vice President Pence to, at the very least stop, stoking the flames that have resulted from Trump's Jerusalem decision."

7 Things You Should Know: Trump’s Decision on Jerusalem
APN's Debra Shushan in Haaretz: As Trump and Netanyahu Meet, Our Plea as Interfaith Leaders: Stop Boosting the Proponents of a Religious War
Hard Questions, Tough Answers (1.22.18) - Searching for an American policy rationale in the Middle East
APN to Trump: Don't Transfer Israel Embassy to Jerusalem
Shalom Achshav and APN: Alarmed by Destructive Impact of US Embassy's Opening in Jerusalem
NEW ITEM - Goal: Lower the expectations of the Palestinians - The Friedman File: APN Watch on soon-to-be-ex-US Ambassador to Israel
APN's Debra Shushan in Haaretz: The Israeli 'Left' Is Gaslighting U.S. Jews Into Support for Trump on Jerusalem