Today, 12 February, the Settlement Subcommittee of the Higher Planning Committee of the Civil Administration convened to discuss a series of new plans in the settlements. Among other things, the committee approved the establishment of a new, “temporary” settlement for the evacuees of Nativ Ha’Avot. The committee also  approved 68 new housing units in the settlement of Elazar, the construction of a hotel in the Jordan Valley with 120 rooms next to a motor park and Tourist Area, and the construction of a cemetery near an industrial zone planned for the construction south of Qalqiliya. A further plan for an educational campus in the illegal outpost of Mitzpe Danny was discussed but the subcommittee has postponed its decision to a later date.

Peace Now: “The government is building new settlement areas under the guise of “insignificant” plans that will not include housing units. This is an old trick used to establish new settlements without calling them that by name. All of these plans—the construction of a hotel and tourist complex in the Jordan Valley, an educational campus in an illegal outpost, and even a cemetery as the first stage in the construction of a new industrial zone—in actuality create new settlements. The Netanyahu government has lost all the brakes on the road to de facto annexation of the West Bank, and it continues to distance Israel from the prospects for peace and the two-state solution.”

Details:
Some of the programs that appear on the committee’s agenda are plans for small changes in old plans without the addition of housing units; however, there are other politically significant plans that will create new settlement areas, as enumerated below. These additional plans blatantly contradict the declared policy of the Netanyahu government itself, which committed to limiting construction to the “built-up area” within settlements, and to holding hearings on plans for new housing units only four times per year (the previous hearing was just last month, on 10 January 2018):

1. Plan No. 404/1/6/5 (approved for validation) – a plan for the construction of 68 new housing units in the Elazar settlement near Bethlehem. The plan was approved for deposit on 17 January and was today approved for validation. It should be noted that the land concerning this plan was once privately owned by Palestinians but was seized for military use in the 1970s and now is being used for civilian settlement.

2. Plan No. 405/11 (Part 91) (approved for validation) – the establishment of a new, “temporary” settlement for the families whose homes are slated to be demolished in the Nativ Ha’Avot outpost according to the High Court of Justice’s 2016 ruling. The plan was approved for deposit on 17 October 2017 and was deposited for objections one month later. Last week, the subcommittee for objections within the Higher Planning Committee discussed the objections that had been submitted by Palestinian landowners from Al-Khader and Peace Now. Following these objections, the subcommittee decided to reduce the number of housing units from 17 to 15, but chose to reject the objections and to recommend approval of the plan. In the hearing today, the committee approved the establishment of the settlement, even though the subcommittee for objections admits that the plan is not appropriate, as it explains: “Although the professional authorities do not dispute that from a planning point of view, this is an unusual plan.” 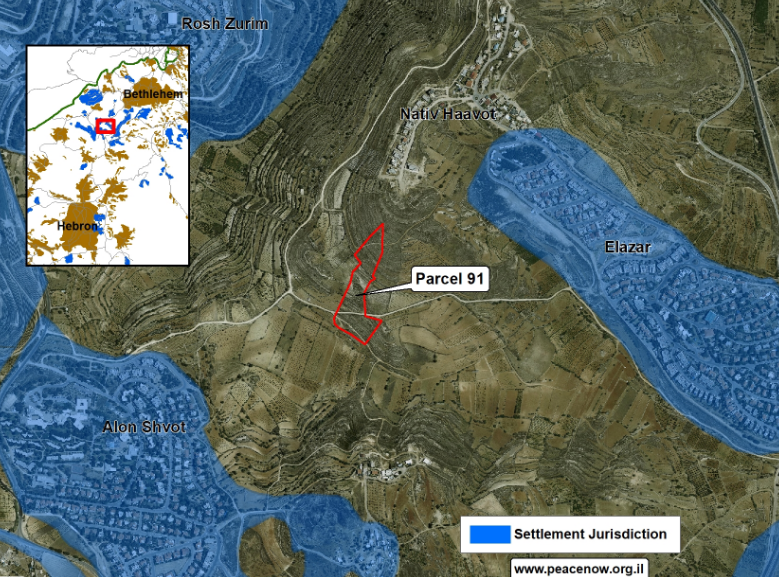 3. Program No. 315/3 – Hotel, Motor Park and Tourist Area in the Jordan Valley (approved for deposit) – A plan to create a tourist attraction with 120 hotel rooms and various activities in a new compound north of the Palestinian village of Fasayil and the settlement of Petza’el. Although these are not residential buildings, the new compound will in effect constitute a new settlement, which will spread over hundreds of dunams, attract thousands of visitors, and become a new Israeli tourism destination in the West Bank. It should be noted that about a year ago, a motorized park was opened, including a track for cars and motorcycles, with the encouragement of the Jordan Valley Regional Council. The plan is to regulate the park and to add additional facilities. 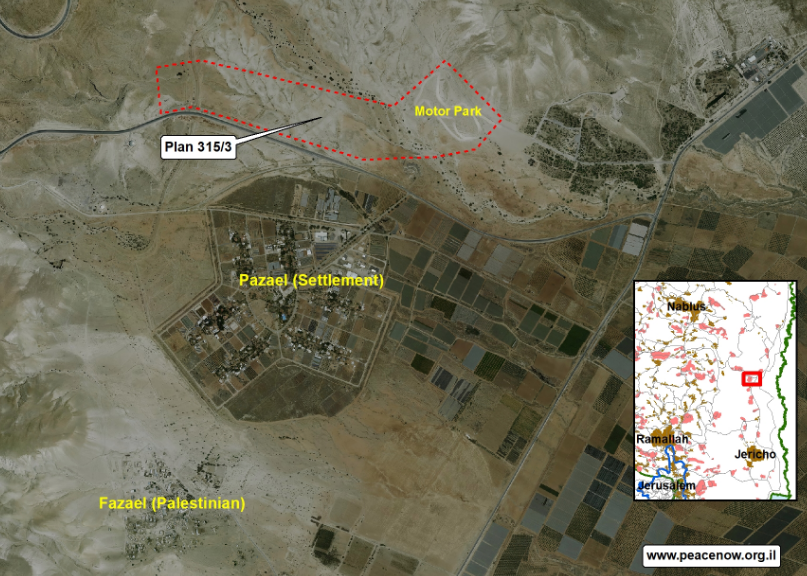 4. Plan No. 225/3/1 – Education Campus and Gas Station at the Mitzpe Danny outpost, east of Ramallah (approved for deposit) – Although this is not a residential program, this also signifies the construction of a new settlement complex in the Occupied Territories. The plan is to cover 140 dunams and will constitute a permanent presence of hundreds of Israeli students and teachers. The plan is adjacent to the illegal outpost of Mitzpe Danny, and it could be part of an effort to legalize it and thereby turn it into an official settlement. During the discussion, the head of the Mateh Binyamin Regional Council said that he is devising a plan to legalize all housing units in Mitzpe Danny. 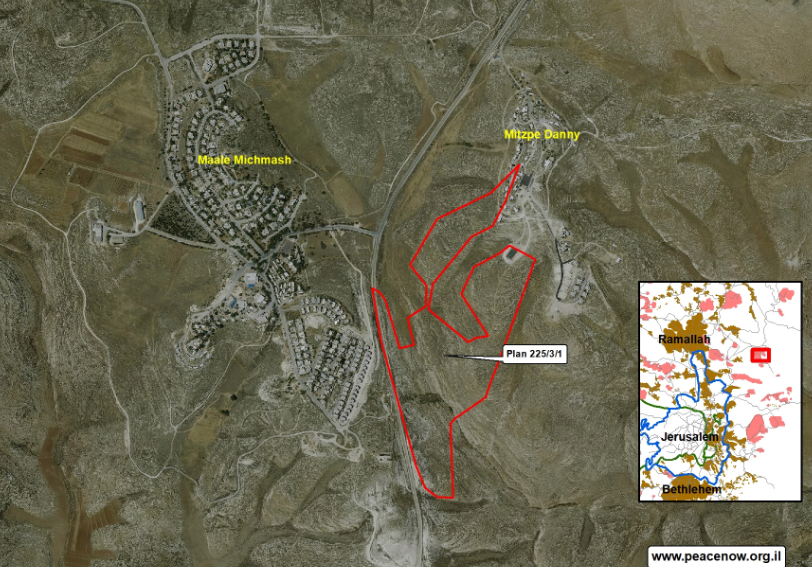 5. Plan No. 192/1 – Nahal Raba Regional Cemetery, south of Qalqiliya (postponed for later discussion for deposit) – In the area of Nahal Raba, there existed a firing zone for years that prevented the use of the land. The land’s designation as a firing zone was lifted a few years ago, and the government’s Blue Line team set new boundaries for the state lands that comprised this area, all in preparation for a plan to build a new industrial zone. Industrial zones are a type of settlement in of themselves, and the planned cemetery is likely to be the first component toward establishing the new industrial zone. 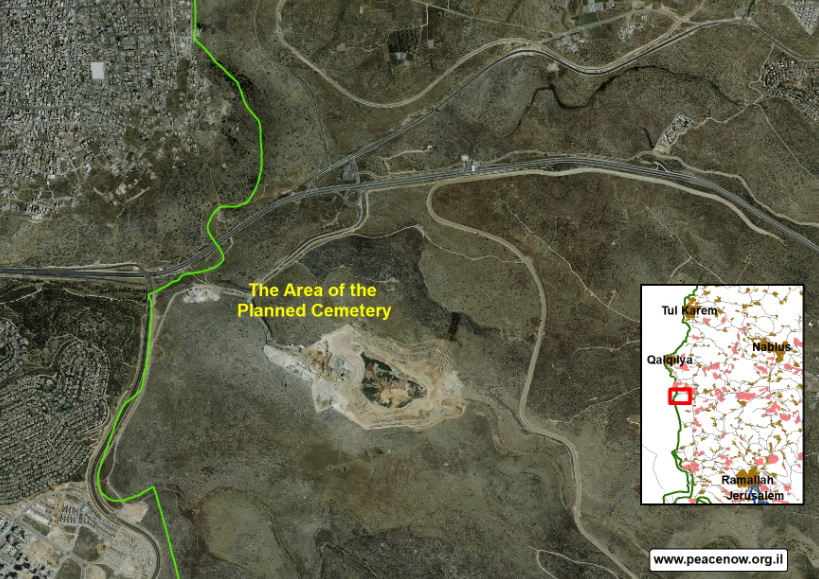