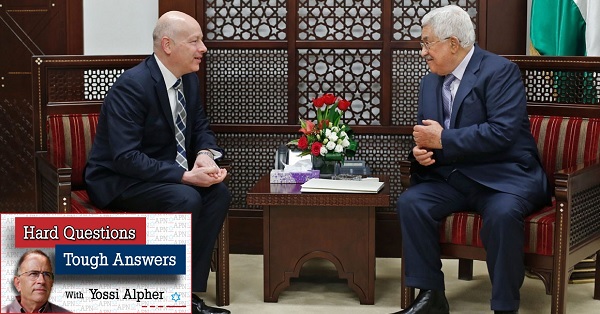 This week, Alpher discusses Saudi Crown Prince Mohammed bin Salman's upcoming, unprecedented three-week visit to the US; whether there is an Israel angle to MbS's visions; Jason Greenblatt's opinion piece last week in the Washington Post which seemingly envisioned a future Hamas role in a US-led peace process; and Hamas's upcoming mass march toward Israel’s border fence planned for May 15, the seventieth anniversary of Israeli independence and of the Palestinian “nakba”.

Q. Saudi Crown Prince Mohammed bin Salman will arrive in the US in a week for an unprecedented three-week visit. What “visions” does this dynamic new leader bring with him?

A. The 32-year old Saudi leader seems to be all “vision”. He will be marketing himself and his visions in this US trip, which will include somewhat unconventional stops in places like Silicon Valley.

One MbS vision is called Saudia 2030. It involves MbS’s plan for remaking the Saudi economic, cultural and social scene over the next dozen years. The traditional oil-based economy is being diversified. Cinemas and theaters are opening and women are being allowed to drive. Another vision is called NEOM: a huge hi-tech urban complex to be constructed on the hitherto-neglected Saudi northern Red Sea coast. The complex will encompass territory larger than Israel and will overflow into Jordan and, via an ambitious bridge, into Egyptian Sinai.

Yet another vision MbS will be presenting to his American hosts, unveiled last week in a Cairo visit, is of a Middle East “triangle of evil” comprising Iran, Turkey, and the Muslim Brotherhood and other Islamic extremists. There is some controversy over whether MbS really intended Turkey to be included, but the gist of this vision is his claim that Saudi Arabia is now leading the fight against Islamist extremists. The latter, we recall, are both Sunni (Muslim Brotherhood and other Islamists, some of which have been backed by Turkey) and Shiite (Iran). MbS himself stars in a popular Saudi video in which he leads the Saudi army into Tehran.

This, then, is a kind of grand strategic vision meant to explain otherwise hapless Saudi campaigns. First came the destructive military stalemate in neighboring Yemen, still ongoing. It was followed by the unproductive diplomatic and economic campaign to isolate the maverick leaders of neighboring Qatar and the abortive attempt to forcibly remove Lebanon’s Prime Minister Hariri from office.

Another controversial vision MbS represents is of himself as a highly authoritarian absolute Saudi ruler for the decades to come. In recent months he has jailed (in a five-star hotel in Riyadh) many of the kingdom’s wealthiest princes and other businessmen in order to extort from them huge sums and assets in “back taxes”. He has replaced the military’s top brass. He has jailed (in real jails) other, allegedly rebellious princes. Many detainees were reportedly beaten. The entire process has lacked transparency or any reference to recognizable legal standards. Executions have doubled in the kingdom in the past year. Then too, while preaching national austerity, MbS has recently acquired for himself a glittering new palace, a yacht and a Rembrandt.

In other words, MbS’s visions are highly authoritarian, at times brutal, and in no way involve democratization. Presumably this will not constitute a problem in his contacts with President Trump, Jared Kushner and other high US officials who like authoritarian rulers and whose main focus is on lucrative investment projects in the kingdom. That was already the case during last week’s three-day visit by MbS to Britain, where the establishment saw only the pound sterling bottom line while a variety of protest groups paraded in the streets of London.

Q. Is there an Israel angle to MbS’s visions?

A. Yes, and it is potentially both economic and security-oriented. Some Saudi-Israeli strategic coordination against Iran and ISIS is by now an open secret. While this preceded MbS’s rise to power, he is apparently set on expanding it. Riyadh has been relatively supportive of the Trump Jerusalem declaration and Palestinian peace plan, even pressuring the PLO in this regard. NEOM could not come into existence without Egypt transferring to Saudi sovereignty two strategically-located Red Sea islands and the Saudis, for their part, assuring Israel that its freedom of navigation to and from its Red Sea-port of Eilat would be respected. Nor would it be far-fetched to presume some sort of Israeli economic access to the nearby Saudi mega-city. Recently MbS granted unprecedented over-flight rights to Air India on its way to and from Israel, thereby shortening the flight by two hours.

It stands to reason that the Israeli angle will be on the table in MbS’s official talks in the US. The only fly in the ointment might be Israeli PM Netanyahu’s recent protest to Trump regarding US plans to boost Saudi nuclear projects that could eventually have a military dimension.

Q. Jason Greenblatt, President Trump’s special representative for international relations, wrote an opinion piece last week in the Washington Post seemingly envisioning a future Hamas role in a US-led peace process. Is this vision a new departure for US policy?

A. Greenblatt’s assertions warrant careful monitoring. Ostensibly, he seems to be accepting Hamas as an alternative interlocutor to the PLO, at least in the Gaza Strip, if the Palestinian Islamist movement reforms itself.

According to Greenblatt, the administration is holding a “brainstorming” session, also billed as a Gaza donor conference, this week “to find real solutions” to Gaza’s problems. In an op-ed endorsing concepts like investment and prosperity for Gaza--meaning “economic peace”, a favorite concept of Greenblatt’s that reflects a failed patronizing view of what motivates Palestinians--he never mentions the PLO. Instead, Greenblatt calls upon Hamas to reform itself in accordance with the Quartet’s conditions of more than a decade ago. It must commit to non-violence, recognize Israel and accept the Oslo accords. “There is a way out for Gaza,” he states, “if only Hamas has the courage to admit failure and chart a new course.”

What is new here is not the economic peace approach, which has failed and will fail, but rather the implication that the PLO, which has rejected a US role ever since Trump recognized an Israeli capital in Jerusalem, is somehow replaceable by Hamas. Conceivably, this is little more than an administration ploy to frighten PLO leader Mahmoud Abbas into backpedaling and agreeing to talk to Washington. A PLO official on Sunday condemned this week’s conference on Gaza as a US “blackmail tool”.

Still, I would respond with three messages for Greenblatt. First, US-led investment in all geographic parts of the Palestinian Authority is welcome and constructive, but don’t confuse it with a peace process. Second, Hamas is an Islamist movement that is not likely to de-Islamize itself and recognize Israel. And third, be careful what you wish for: aggrandizing Hamas at the expense of the PLO could be disastrous for Israel, particularly if a US-rebranded Hamas finds a role in the West Bank.

Q. Meanwhile, Hamas in Gaza is planning a mass march toward Israel’s border fence on May 15, the seventieth anniversary of Israeli independence and of the Palestinian “nakba”, the “disaster” of defeat and exile in 1948. Is there a precedent for this kind of mass demonstration?

A. Ismail Haniyeh, head of the Hamas Political Bureau, warned unconvincingly last week “we won’t be able to control the tens of thousands of Palestinian citizens in their marches in the north, east and south of the Strip to protest the siege of Gaza” in May. PLO leaders in the West Bank are threatening similar marches and demonstrations, designed to culminate at the border fences on May 15. The implication is clear: the marchers will not stop at the fence, but will attempt to break through it into Israel, the ancestral home of those among the marchers who are descendants of 1948 refugees.

The idea of a mass march to claim or reclaim land is not new. In November 1975 it even got a name, when Morocco’s King Hassan II organized a “green march” of around 250,000 Moroccans into the Spanish Sahara to claim it for Morocco. Notably, the Moroccan move did not generate international recognition for the controversial Moroccan claim to the Western Sahara, which has been the focus of guerrilla warfare and a United Nations mediating effort ever since.

Back in 1949 there was an earlier Palestinian attempt to organize a march from the Gaza Strip into Israel. At the time, the Palestinian refugee issue was fresh, there was no Israeli fence around the Strip, and some of the homes and orchards in southern Israel abandoned by the refugees were still intact. A retired Israeli general once related to me the story of that abortive march: he deployed an IDF combat unit opposite the marchers and threatened to open fire. That ended (without casualties) the first Palestinian green march initiative.

In the course of Oslo-based peace negotiations between Israelis and Palestinians in recent years the idea has again surfaced indirectly. Israel has always asserted that part of a two-state deal would have to be renunciation by Palestinians of the “right of return” of the descendants of 1948 refugees, an idea that has no basis in refugee solutions anywhere else in the world. “Return”, Israel has asserted, has to be exercised to the West Bank and Gaza-based Palestinian state, not to Israel. And indeed, peace talks have included reference to plans to absorb upwards of half a million of the refugees--from Lebanon, from Jordan and even from the overcrowded Gaza Strip--in the West Bank.

But what if a newly-independent Palestinian State were to encourage half a million or even more newly-arrived refugees to launch a green march into pre-1967 Israel in a demonstrative attempt to reclaim their forefathers’ homes? By the same token, what if a confederative two-state solution with open borders were to witness a popular movement among Palestinian refugees, whether newly arrived in the West Bank or long based in Gaza, to simply move in large numbers into Israel.

Q. The bottom line to this discussion?

A. The Palestinian vision of “return”, whether by green march or by agreement, has constituted a major theme in the Israeli-Palestinian conflict since 1948. For Israelis it is a threat that expresses ongoing Palestinian refusal to accept Israel’s legitimacy as the embodiment of the Jews’ nationhood in their ancient homeland. If the right of return of all 5.8 million refugees and their descendants is recognized by Israel, this would be understood as an acknowledgment that Israel was “born in sin” and is illegitimate--hardly the way to stabilize a two-state solution.

In this regard, Israel’s fences around the Gaza Strip and between the West Bank and Israel are not just about keeping terrorists out. Repeated negotiations regarding the refugees and return have gotten virtually nowhere since the inception of the Oslo process in 1993. The 70-year anniversary of Israel’s independence and the Palestinian nakba in May is almost certain to witness an escalation of return-related tensions in the form of a green march attempt and related provocative Palestinian diplomatic initiatives.