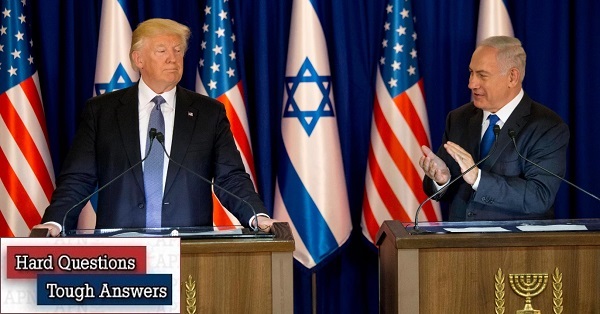 This week, Alpher discusses President Trump's statement: “we’ve taken Jerusalem off the table”; what the prospective May summit between Trump and North Korea’s Kim Jong-un means in Middle East terms; how replacing Tillerson with Mike Pompeo and appointing Gina Haspel to take over the CIA affects the Middle East; Trump's response to Russia's use of a nerve agent in the poisoning of British spies; and where Netanyahu is on these Trump acts and statements.

Q. On March 5, in a meeting with Prime Minister Netanyahu, President Trump repeated a statement from December: “we’ve taken Jerusalem off the table”. What does this mean in peace process terms?

A. Trump has said this twice; the first time was last December in the context of his recognition of Jerusalem as Israel’s capital. Bearing in mind Trump’s ignorance of the issues, inability to think strategically and contradictory rhetoric, there appear to be two ways to interpret the statement. Either no US proposal regarding Jerusalem will be included at all in the soon-to-be-unveiled Greenblatt/Kushner peace plan, or the proposal will explicitly award all of Jerusalem to Israel as part of the ultimate two-state solution envisioned by the US. Trump appears not to distinguish between the religious dimension of a Jerusalem solution, meaning the disposition of the Temple Mount and the more extensive Holy Basin including the Old City, and the political dimension, meaning the location of the capital of a Palestinian state. Note that back in December he was careful to note that his recognition of Israel’s capital in Jerusalem did not preclude discussion of the political aspect: “President Trump recognizes that the specific boundaries of Israeli sovereignty in Jerusalem are subject to final status negotiations between the parties,” the White House stated. But what about the religious aspect? Is it possible that the anticipated Greenblatt plan will invite Israel and the Palestinians to discuss the “boundaries of Israeli sovereignty in Jerusalem”, meaning the possibility of a Palestinian capital in the city as well, while “taking off the table” the religious aspects and calling upon the parties to postpone discussion of the Temple Mount until after agreement is reached on a Palestinian state? Such a “real estate first” approach to Jerusalem would be smart. Israeli and Palestinian negotiators have in the past (2000, 2008) more or less agreed on parameters for either dividing or sharing the city between two capitals. In contrast, the question of the religious/sovereign disposition of the Temple Mount has proven intractable in final status negotiations thus far. It is one of those core narrative issues where Palestinian negotiators are unable to accept Israel’s legitimacy (as even a joint caretaker of the Mount, along with the Palestinians and other Arabs) lest their constituents--meaning in this case not just the Palestinian people but the Muslim world--rise up against them. Obviously, Donald Trump does not understand these nuances. Does Greenblatt? Assuming the PLO can somehow be persuaded to acquiesce in Trump’s December Jerusalem recognition statement and that US guarantees are provided regarding negotiations at a later date over the future Islamic and Jewish status of the Temple Mount, a real estate approach to “political” Jerusalem might constitute an interesting innovation.

Q. What does the prospective May summit between Trump and North Korea’s Kim Jong-un mean in Middle East terms?

A. The easy answer refers to North Korea’s record as a vendor of sophisticated arms to the Arab Middle East and to Iran. Pyongyang almost completed building a secret weapons-grade nuclear plant in Syria before Israel reportedly destroyed it in September 2007. The North Koreans have reportedly sold nuclear know-how to Iran. North Korean missile sales have involved countries from Egypt to Iran. North Korean aircraft and pilots have participated on the Arab side in wars against Israel. So one obvious issue area where Israel would hope to see results from a US-North Korea strategic dialogue would be to persuade Pyongyang to cease its military involvement in the Middle East. The more complicated issue from Israel’s standpoint is the need to negotiate an end to North Korea’s own military nuclear project. Here we encounter the interplay between Trump’s demands regarding North Korea and his stated intention to withdraw Washington’s signature from the JCPOA, the 2016 nuclear deal with Iran. Indeed, US withdrawal from the JCPOA is now projected for May, the very month when Trump and Kim are tentatively scheduled to meet. Ostensibly, Kim will interpret the demise of the JCPOA as a reason to refuse at all costs to dismantle North Korea’s military nuclear project. If the US cannot honor its nuclear commitments regarding Tehran, Kim will presumably argue, how can it demand such commitments from me? He will also cite decisions in recent decades by Saddam Hussein of Iraq and Moammar Qaddafi of Libya to dismantle nuclear projects under American pressure, only to be deposed and eventually killed by US-backed forces. Nuclear weapons, Kim will tell Trump, are an insurance policy for the survival of my regime. Assuming he does indeed withdraw from the JCPOA, Trump will argue that he is doing so because the agreement is too weak. His goal is for Iran to commit to nuclear disarmament permanently rather than for 10 or 15 years, and for Kim to accept a similar demand. Trump claims he will not suffice with deals that seemingly kick the nuclear can down the road for a decade. What incentives and enticements can Trump possibly offer both the North Koreans and the Iranians to persuade them to denuclearize permanently? What sanctions and military threats can he wave in their faces to force them to do so? Will his twin-pronged approach end up in de-fanging Pyongyang and Tehran or will it stiffen their resolve? Israel has a huge stake in the outcome. As matters stand, at least in the Iranian case the outcome will be negative: Trump will end up forcing Iran itself out of the JCPOA and back to an active drive to “get the bomb”, thereby posing the threat of a major war involving Israel. Worse, in the North Korean case Trump would be seeking to compel Pyongyang to give up what it already has, whereas Iran entered into the JCPOA without a full-fledged nuclear option to give up in the first place. There is one additional Iran-related dimension to the anticipated May summit between Trump and Kim. If the US president can meet with Kim after “softening” him with threats and crude insults, why can’t he and why shouldn’t he meet with Iran’s Supreme Leader Khamenei as well? Trump reportedly actually solicited a meeting with President Rouhani back in September when both were at the UN General Assembly. Rouhani refused. Even Barack Obama, the principal sponsor of the JCPOA, never met with Khamenei.

Q. On March 13, Trump fired Secretary of State Tillerson and replaced him with the CIA’s Mike Pompeo. He then appointed Gina Haspel to take over the CIA. How does all this affect the Middle East?

A. Tillerson was pro-JCPOA and openly criticized Russia over its regional and global policies and brutal assassinations of dissidents and spies. With his background of energy ties with the Arab world, he was lukewarm toward Israel. Trump gave the Israeli-Palestinian file to Greenblatt and Kushner and not to the State Department. In contrast to Tillerson, Pompeo, at the CIA and before, has been extremely hawkish on Iran and its regime, anti-JCPOA, and very pro-Israel. He recently said that Washington would negotiate with Pyongyang from a “position of enormous strength” and suggested that a deal between the two would leave North Korea without even an Iran-style nuclear breakout capability. Trump and Tillerson clearly did not get along--almost from the start. Under Tillerson the State Department has lost many experienced diplomats who left in protest, and it has failed to fill empty senior posts with new appointees. Many observers expect the ultra-hawkish Pompeo, whose Washington background is much richer than Tillerson’s, to at least get State up and running again at the professional level. Will Pompeo also restore the State Department as Washington’s senior Middle East peace process player? What would this mean for the Greenblatt/Kushner team and its soon-to-be-unveiled effort? The appointment of Gina Haspel to succeed Pompeo at the CIA also sends a message: that Haspel’s record of supervising torture (waterboarding) and destroying the video evidence is not only condoned but rewarded by the government she serves. This cynical view of human rights and the rule of law in the context of intelligence warfare is relevant to Trump’s position regarding the following issue.

Q. Finally, on March 13 Trump remarked, apropos the use of a nerve agent in the UK to poison two Russians one of whom had spied for Britain, “As soon as we get the facts straight, if we agree with them, we will condemn Russia or whoever it may be.” Can you deconstruct this sentence?

A. Nobody has been surprised by the White House’s reticence to condemn Russia in the context of the nerve gas attack or for that matter almost anything else. Trump’s relative silence is currently complemented by reports that he is once again contemplating removing Special Prosecutor Mueller, who is investigating a mass of information concerning Russian involvement in Trump’s 2016 presidential election campaign and eventual victory. More intriguing, at least at the psychological-intellectual-political level, is the offer to look at the facts of the nerve agent case “if we agree with them.” This is reminiscent of that amazing statement by Counselor to the President Kellyanne Conway last year to the effect that “we have alternative facts”. Facts used to be facts. Now, in the age of Twitter and of multiple and highly politicized internet news sites, facts have become alternative versions of some abstract truth that can be accepted, rejected, or reformulated in accordance with the version of reality that Trump and his team wish to project.

Q. Where is Netanyahu on these Trump acts and statements?

A. While Netanyahu has avoided any comment that might be interpreted as interference in internal American controversies regarding Trump, he is undoubtedly happy. First and foremost he approves of the declared intention to cancel the JCPOA, a deal that he campaigned against during the Obama administration. And he is happy with Pompeo moving to State, where Netanyahu could see him as an alternative address regarding peace process issues if, unexpectedly, Greenblatt and Kushner present a peace proposal to which Netanyahu has objections. Finally, regarding the newly flexible nature of facts under Trump, Netanyahu is plainly emulating the US president’s language and approach. “Fake news” is Netanyahu’s term for just about all the criminal allegations against him and his wife. He would never have dared to use such terminology prior to Trump’s presidential campaign and election. And allegations of treasonous behavior are Netanyahu’s way of dealing with the attorney general and the chief of police, both of whom he himself appointed, when they stand behind corruption charges against him. That too should ring familiar to US readers. This is as dangerous for Israeli democracy and public life as it is for the United States.