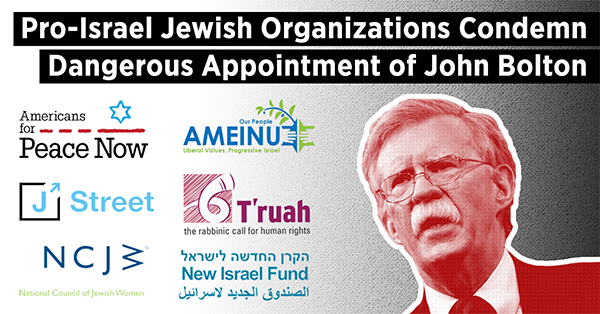 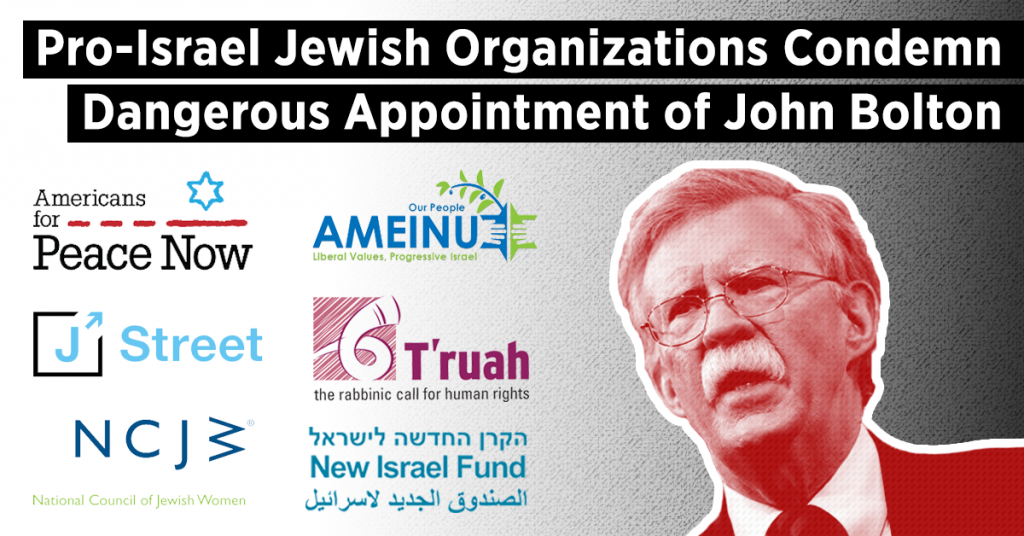 “As American Jewish organizations and strong supporters of Israel, we are deeply alarmed by the appointment of John Bolton to serve as President Trump’s National Security Advisor. His long record shows him to be a fierce advocate for belligerent policies that would endanger the national security of the US, Israel and our allies around the world.

“Throughout his career, Bolton has consistently expressed utter contempt toward diplomacy and peacemaking, favoring instead the rash and unnecessary use of military force around the globe. Bolton is an unrepentant defender of the Iraq war and his bellicose ideology could very well start us down the path to another unnecessary war of choice. Bolton’s calls to scrap the successful Iran nuclear deal and undertake military action against Iran make it likely that he will encourage President Trump’s own aggressive inclinations. His hostility to the concept of international law raises concerns about future American adherence to the Geneva Conventions and its prohibitions against torture.

“When it comes to Israel, Bolton has shown no concern for the need to secure its future as a democratic homeland for the Jewish people by ending the Israeli-Palestinian conflict. He has vehemently opposed US efforts to help reach a two-state solution and rejected the idea of Palestinian self-determination and statehood. This rejection of peacemaking only benefits extremists while harming Israel and the Palestinian people.

“Bolton has allied himself closely with prominent Islamophobes, whose hateful views should have no place in our government or foreign policy. This willingness to support anti-Muslim bigotry violates fundamental Jewish and democratic values of tolerance, equality and respect.

“We have every reason to expect that Bolton will exacerbate the worst instincts of the Trump Administration regarding the nature of American leadership, further undermining our nation’s international standing and our ability to serve as a global force for peace and progress.

“This appointment should serve as a clarion call for all those who support the pursuit of peace and reject the march to wars of aggression. We cannot stand idly by while President Trump empowers extremists and moves to assemble a “war cabinet.’’ This is a moment when we must take a stand and speak out.”

APN Condemns Trump's Choice of John Bolton as National Security Advisor
APN Condemns Appointment of Bannon, Calls Out Jewish Groups for Failure to Stand Against Anti-Semitism & Hate-Mongering
Tell Congress to Halt the Push to War Against Iran
Reasons for Hope
ACTION ALERT: Act to Prevent Trump from Launching a War of Choice Against Iran
Shalom Achshav and APN: Alarmed by Destructive Impact of US Embassy's Opening in Jerusalem
APN Outraged by “Merger” of US Embassy and Consulate in Jerusalem, Calls on US Jewish Leadership to Act