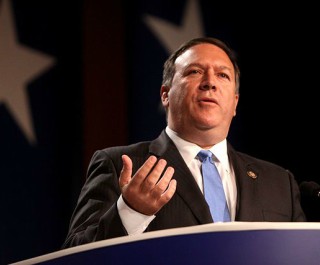 PROGRESSIVE GROUPS URGE SENATE TO REJECT POMPEO -- Dozens of national progressive groups are calling on the Senate to reject CIA Director Mike Pompeo’s nomination to be secretary of state. Roughly 70 groups signed onto a letter obtained by Huddle expressing opposition to Pompeo, warning that he “promotes principles and policies that are antithetical to American values.” “His repeated advocacy for war, Islamophobia, climate change denial, hostility to human rights, including reproductive and LGBT rights, and support for torture make him dangerous and unfit to be a chief architect of U.S. foreign policy,” they write.

Pompeo’s confirmation faces an uncertain path in the Senate, where Republicans hold a narrow 51-49 majority. Fourteen Senate Democrats voted for him to be CIA director. But with Sen. Rand Paul (R-Ky.) publicly opposed and Sen. John McCain (R-Ariz.) recovering from cancer treatment, Democrats could sink Pompeo’s confirmation bid with united opposition. Republicans, however, could find support from vulnerable red-state Democrats running for reelection this year. But progressive groups are arguing that a Secretary of State Pompeo would be the leader of Trump’s “War Cabinet.” “Pompeo is unfit to serve as Secretary of State,” the groups conclude. “We urge you to oppose and reject his nomination.”

Read the letter and see the signatories here!