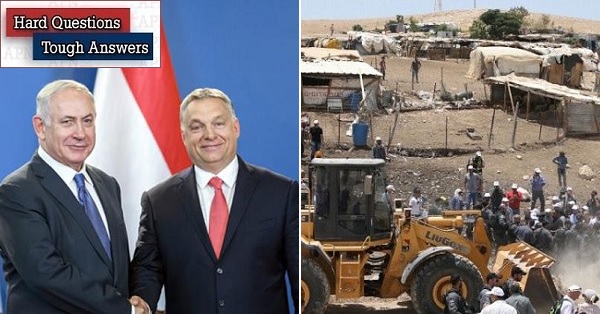 Q. Last week, the Polish Foreign Ministry published in the Israeli press a joint Polish-Israeli declaration that seeks to clarify the role played by Poland in the Holocaust in a manner that essentially exonerates nearly all Poles. Why now, and why the controversy?

A. The joint declaration, signed by Polish Prime Minister Mateusz Morawiecki and Israeli Prime Minister Benjamin Netanyahu, in effect constitutes a bilateral Israeli-Polish attempt to lay to rest the tensions created by recent Polish legislation that criminalizes accusations regarding the Polish role in the Holocaust. An international outcry led to Polish steps to modify (but not revoke) that legislation.

Now we have the declaration, which was greeted by Israeli experts on the Holocaust as an unacceptable whitewashing of the Polish role. Yad Vashem, the world’s leading Holocaust research institution, examined the document and declared it rife with historical distortions. Prof. Yehuda Bauer, at 92 the dean of Holocaust researchers, called the declaration “treason”. Politicians from left and right in Israel piled on, with right-nationalist Education Minister Naftali Bennet declaring he would not allow the document to enter the Israeli education system.

Yad Vashem, which offered the most detailed criticism, refutes the claims in the Polish-Israeli statement that the WWII Polish government- in-exile attempted to stop Nazi activity “by trying to raise awareness among the Western allies to the systematic murder of the Polish Jews.” The Yad Vashem statement added, “Much of the Polish resistance in its various movements not only failed to help Jews, but was also not infrequently actively involved in persecuting them.”

Yad Vashem also took sharp issue with a clause in the joint statement that stated: “We are honored to remember heroic acts of numerous Poles, especially the Righteous Among the Nations, who risked their lives to save the Jewish people.” By contrast, Yad Vashem wrote: “On the question of the balance of forces between aid and persecution, the past three decades of historical research reveal a totally different picture: Poles’ assistance to Jews during the Holocaust was relatively rare, and attacks against and even the murder of Jews were widespread phenomena.”

Furthermore, Yad Vashem said, “The statement also illegitimately uncouples the disaster that befell the Jews from its concrete historical context and the reality of occupied Poland during the war by claiming that during the war ‘some people, regardless of their origin, religion, or worldview, revealed their darkest side at that time.’ Beyond the outrageous insinuation that Jews also revealed ‘their darkest side at that time,’ those who revealed this side... were not devoid of identity. They were Polish and Catholic, and they collaborated with the German occupier, whom they hated, in persecuting the Jewish citizens of Poland.

Q. What’s your personal take on the Polish position?

A. About eight years ago, I was invited to a conference on the Middle East held in Warsaw and sponsored by a Polish think tank. At one point during discussions, an Algerian participant queried why Israelis are so worried about Iran’s threats. Genocide, he said, is no longer an issue in the world.

I responded that Israelis take a different view: “Here we are on Polish soil, where during my lifetime the Holocaust took place. You can’t expect us to ignore new threats to destroy us from a country, Iran, that denies the Holocaust.” Note that I never in any way implied a Polish role in, or Polish responsibility for, the murder of Jews.

A month later I was sent a transcript of all my remarks at the conference, for pre-publication approval. The exchange about genocide and the Holocaust was missing. I reinserted it into the text and sent it back. After another month I received the final publication of the conference discussions. What I reinserted had been removed. My hosts, Polish academics, had cleansed the text of my minimalistic remark linking Poland to the Holocaust.

At the time, Poland did not have the ultra-nationalist government it has today, which has criminalized allegations regarding the Polish Holocaust role and responsibility. Poland, then as now, is clearly not Germany where collective guilt is acknowledged and taught in schools. Every Jew I have ever met with a Polish background can tell you about Polish anti-Semitism before and during WWII.

True, Poland is not alone in rewriting its WWII history and making compromises with it. The French were in collective denial for years before acknowledging, but only beginning in 1995, that far more French citizens collaborated with the Nazis than joined the Resistance and before coming to terms with the French role in delivering Jews to the Nazi extermination machine. A couple of years ago, Netanyahu himself brutally distorted history to score points against the Palestinians by accusing them and not Hitler of initiating the Holocaust: “Hitler initially didn’t want to annihilate the Jews. The Mufti of Jerusalem Haj Amin al-Husseini persuaded him to do it.” Nothing could be further from the historical truth.

Q. Where do Israel’s relations with the Visegrad countries and the European Union enter the picture?

A. This is where politics quite obviously enter into Netanyahu’s decision to sign the document. Israel’s prime minister is determined to combat diplomatic and economic pressure from the leading European Union countries--the UK, France, Germany, Spain, the Scandinavian states--over his stance regarding the Palestinian issue and Jerusalem. He is increasingly turning to a growing collection of EU member states where ultra-nationalist influence has become dominant and criticism of Israel is non-existent. These comprise the Visegrad group, a cultural-political alliance founded in 1991 that consists of Poland, Hungary, Slovakia and the Czech Republic. More recently Rumania and Austria have been subject to ultra-nationalist political influence.

Netanyahu actively courts these countries’ governments, along with generally non-critical heavyweights like Russia, China and India, as a kind of counter-weight to the EU mainstream. The Central and Eastern Europeans are particularly important for their EU votes. Netanyahu also hopes to entice one or more of them to follow in the footsteps of President Trump and move their embassies to Jerusalem with the goal of legitimizing Trump’s controversial step.

In his contacts with leaders from these countries, Netanyahu consistently criticizes Western European attitudes as suicidal and self-destructive. He equates the Western Europeans’ criticism of Israel on the Palestinian issue with their allegedly lax attitudes toward Islamist terrorism and absorption of Muslim refugees. He places Israel in the forefront of the countries that are actually protecting an ungrateful Europe.

For example, in August 2016 Netanyahu bragged in a leaked off-the-record briefing, “We safeguard the Middle East and protect Europe and America by our very presence here. I hope that I will soon be able to break up the automatic majority opposing Israel in the United Nations.” On Sept. 7, 2016 at The Hague, Holland, Netanyahu told skeptical Europeans that Israel constituted the forward echelon of the West’s defenses against the threats of Islamist terrorism, waves of refugees, and Iran.

This is the line Netanyahu pitches successfully in Central and Eastern Europe. This is the global political backdrop to the joint statement with Poland and the approaching visit to Israel of Hungarian PM Viktor Orban, whose reliance on anti-Semitic political motifs (e.g., the campaign against the liberal Jewish philanthropist George Soros) and racist anti-refugee positions is well known. Virtually all of these countries are trying to place legal constraints on their judicial branch and civil society sector--as are Netanyahu and the ultra-nationalist religious extremists in his coalition.

Q. You put Netanyahu in the same category as Orban and the Poles?

A. Haaretz daily published the Israeli-Polish statement on July 5. On the page facing the full-page declaration on the Holocaust, Haaretz carried the following items: Netanyahu has surprisingly received permission from the attorney general to recruit funds for his legal fees from two Americans who have testified in his corruption cases; a government ministry is obfuscating Palestinian ownership claims to land occupied by an illegal outpost; members of Knesset are helping build Jewish housing to displace Arabs in the City of David (Silwan); and the Knesset is moving ahead toward passing the Nation Law that demotes Arabic as an official language and legalizes new communities for Jews only.

Q. What is the link to Khan al-Ahmar, a Bedouin village in Area C of the West Bank?

A. Khan al-Ahmar was built in the 1950s by Bedouin expelled from Israel’s Negev to the West Bank. Its 175 residents are mainly nomadic goat-herders and their large families. The village today finds itself located between two prosperous Jewish settlements and situated on land that the government of Israel covets in order to expand the settlements. By the by, replacing Khan al-Ahmar with expanded settlements will in the future render more difficult the prospect of creating a contiguous Palestinian state in the West Bank.

Khan al-Ahmar’s existence has never been legalized. Because it is in Area C, the 60 percent of the West Bank that is under complete Israeli jurisdiction, the Israeli authorities have consistently refused to grant its residents building permits. The village has a single school, built “illegally” with EU funding. Now the authorities want to bulldoze the village and move its residents to Abu Dis, an outlying neighborhood of East Jerusalem that is sometimes mentioned as a possible site for a future Palestinian capital under a two-state solution. The residents of Khan al-Ahmar say this is adding insult to injury: they can’t possibly graze their flocks in an urban setting.

There is of course a broad globalist dimension to this drama. All over the world, nomads are being squeezed out by urbanization and population growth. The nomadic Bedouin life-style does not fare well in many Arab countries either.

But Khan al-Ahmar has become a microscosm of the Israeli-Palestinian conflict. Last week the EU and separately the UK, France, Germany, Italy, Spain and Ireland delivered demarches to Israel demanding that the demolition order be frozen. Israel’s High Court, which had already allowed that the government was within its rights to remove the village, agreed to hold another hearing. Interestingly, some of the settlers in the nearest settlement, Kfar Adumim, have also petitioned to allow the village to remain.

Tensions with the EU over this issue are high. Two weeks ago Netanyahu refused to meet in Israel with EU High Representative (foreign minister) Federica Mogherini, causing her to cancel a visit to Jerusalem. This is where Poland and the Holocaust statement enter the picture. Netanyahu needs the Visegrad group on his side in order to ensure that the European Union cannot adopt any new consensus decisions condemning and penalizing Israel over Khan al-Ahmar. Warsaw and Budapest may still hesitate to violate an EU dictum not to move their embassies to Jerusalem, but they can at least take Netanyahu’s side over this and a host of additional issues.

And they will. Netanyahu appears very comfortable palling around with the ultra-nationalist and “anti-liberal” (Orban’s term) Morawiecki and Orban. Add in Donald Trump, India’s Narendra Modi and the rise of xenophobic far right political parties in the heart of Western Europe too. Netanyahu fits easily into a new and frightening mainstream in the world of democracies in which Polish-Israeli Holocaust declarations and Khan al-Ahmar are but minor manifestations of anti-historical and anti-liberal policy.