Peace Now Settlement Watch: A 40-person Palestinian family is about to be thrown out of its home in Sheikh Jarrah for the benefit of settlers

Last week, the Sabagh family received a notice from the Execution Office stating that it had to vacate its home in Kerem Ja'ouni in Sheikh Jarrah until January 23. If the family does not vacate the house by then, it will face eviction by force.

The eviction lawsuit against the Sabagh family was filed by a company called “Nahalat Shimon”, which represents settlers seeking to build a large settlement in Sheikh Jarrah. The settlers purchased the land from two Jewish associations, the Sephardi Community Committee and the Knesset Israel Committee, which in turn claimed to have purchased the land at the end of the 19th century.

In 1948 the land, which was then without structures, was transferred to the Jordanian rule. The Jordanians designated the land for the resettlement of dozens of Palestinian refugee families who exchanged their refugee statues for homes in the newly-built neighborhood in Sheikh Jarrah. After 1967, the Jewish organizations recovered the ownership rights on the land and began to demand that the refugee families vacate their homes. To that extent, the associations were exercising the "right of return" of Jews to assets taken in 1948 (a right not afforded to Palestinians).

Peace Now: "This is part of an organized and systematic campaign of settlers, with the assistance of government agencies, to expel entire communities in East Jerusalem and to establish settlements in their stead. Dozens of other families face the risk of eviction by legal proceedings in which settlers and government officials exploit discriminatory laws that allow Jews to return to pre-1948 assets yet forbid Palestinians from doing the same. In this way, settlers seek to create a buffer inside the Palestinian neighborhood and make it difficult to reach a territorial compromise in Jerusalem so essential to a two-state solution. 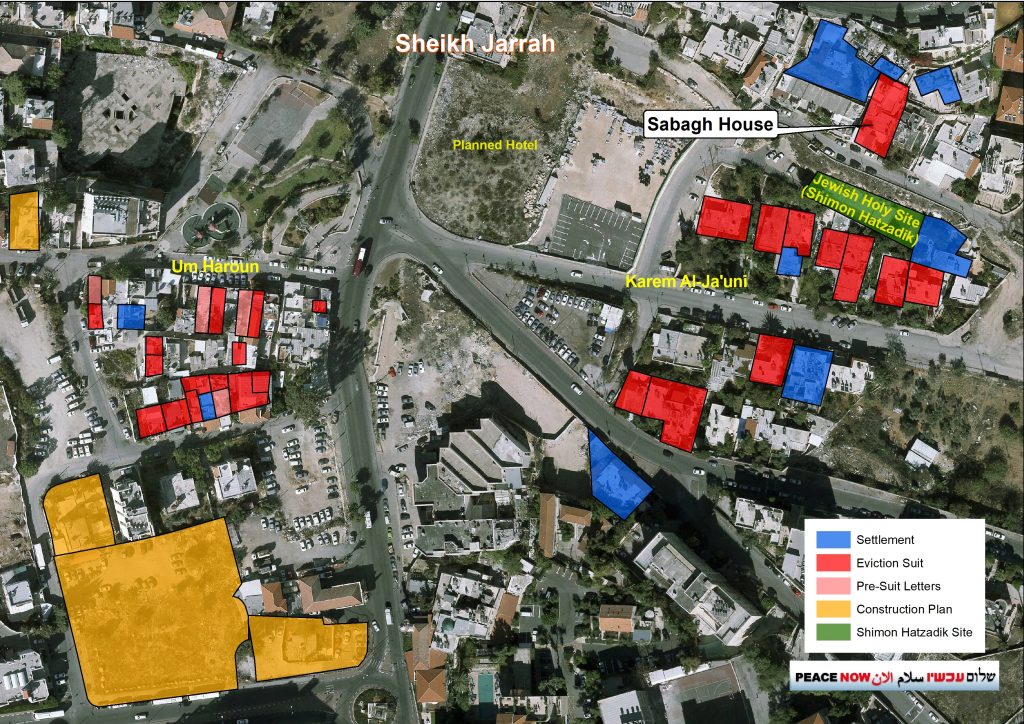 Dozens of Palestinian families are in danger of being evacuated!

In recent years, the Nahalat Shimon settler company has filed numerous lawsuits against dozens of families in Sheikh Jarrah in the Kerem Ja'ouni area, and are in various stages of court hearings. The settlement of Kerem Ja'ouni began in 2008 when the Al Kurd family was evicted from its home, and in 2009 the Rawi, Hanoun and part of al-Kurd families. Since then there have been no evacuations in the neighborhood. Apart from the Sabagh family, Peace Now is aware of at least ten additional eviction cases dealing with dozens of families of hundreds of people which are in various stages of court hearings.

Recently, the lawyers of the Palestinian families obtained documents from Turkey that undermine the original ownership of the Jewish associations and appear to show that the land purchased at the end of the 19th century was in another area, not in Kerem Ja'oni. The Magistrate's Court and District Court refused to discuss the new documents on the grounds of Statute of Limitation. On 13 November 2018, a hearing was held in the Supreme Court on the appeal of the Sabagh family together with another family demanding that they be allowed to submit the documents and to argue the issue of ownership, but the Supreme Court rejected the appeal.

Today, 10 January, 2019, Chief Justice Esther Hayut rejected the request submitted by the families to hold another hearing on the matter, thus paving the way for the evacuation of the Sabagh family.

For more on the threat of eviction in Sheikh Jarrah and Silwan, see here

from the contract between UNRWA and the Jordanian Government, 1954


The principle: the realization of the right of return for Jews

The house of the Sabagh family was built in the 1950s by the Jordanian Housing Ministry as part of a refugee rehabilitation project in which 30 houses were constructed in Sheikh Jarrah for refugee families in return for waiving their status as refugees. It should be noted that the process of registering the houses in the names of the refugees was not completed before 1967. After the area was transferred to Israeli control in the 1967 war, the Jewish associations could take advantage of the lack of registration and registered the land in their name based on the Legal and Administrative Matters Law (1970).

The Discriminatory Law:
In 1970, the Legal and Administrative Matters Law was enacted in Israel, which stipulated, among other things, that Jews who lost their property in East Jerusalem in 1948 could receive it back to their ownership. It is important to mention that Israeli law (the Absentee Property Law of 1950) does not allow Palestinians who lost their assets in Israel in 1948 to receive them back, and permits the state to bring the assets into the state’s possession.

Thus, without saying so explicitly, Israeli law provides for a different law for Jews and Palestinians. In certain cases, the implementation of the law leads to the evacuation of Palestinian refugees from their homes, and in effect makes them refugees for the second time. Moreover, the government of Israel made sure to compensate all the Jews who lost their property in 1948 and gave them alternative assets inside Israel. Hence the owners of the properties are entitled under the Legal and Administrative Matters Law to double compensation for the loss in 1948.

For an analysis of the law and its implementation, see here.


The Sabagh family had a house in Jaffa before 1948, and land in the Yavne and Ashdod areas, but as a result of the war became refugees. According to the Absentee Property Law (1950), they are not entitled to receive or return to their property. In the 1950s, the family attempted to rehabilitate themselves and in exchange for giving up their status as a refugee family. Today, on the basis of the discriminatory law enacted by the Knesset, the family is about to become refugees again, without any justice, where where all that has changed is the geopolitical situation and the law enacted by Israel.

"We have properties in Jaffa, Yavneh and Ashdod, why can’t I ask for my property?" Said Muhammad Sabagh, one of the brothers who lives in the house. 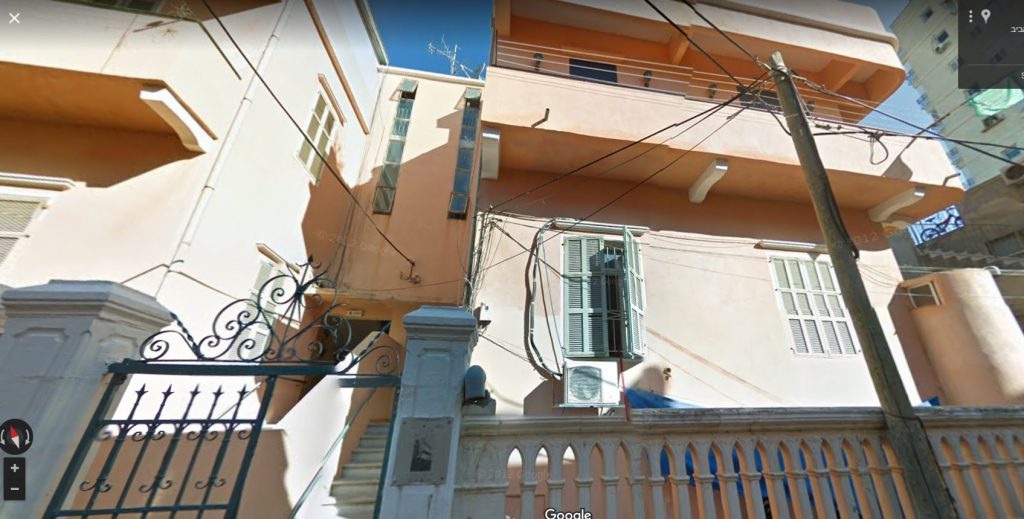 The Sabagh house in Jaffa (credit: google). Lost in 1948 and they can't obtain it back. 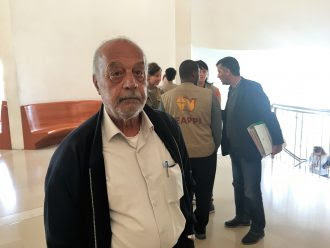