Peace Now: Hearing on Sunday, 10 June on the petition of Palestinians against the settlement in Batan al-Hawa (Silwan) 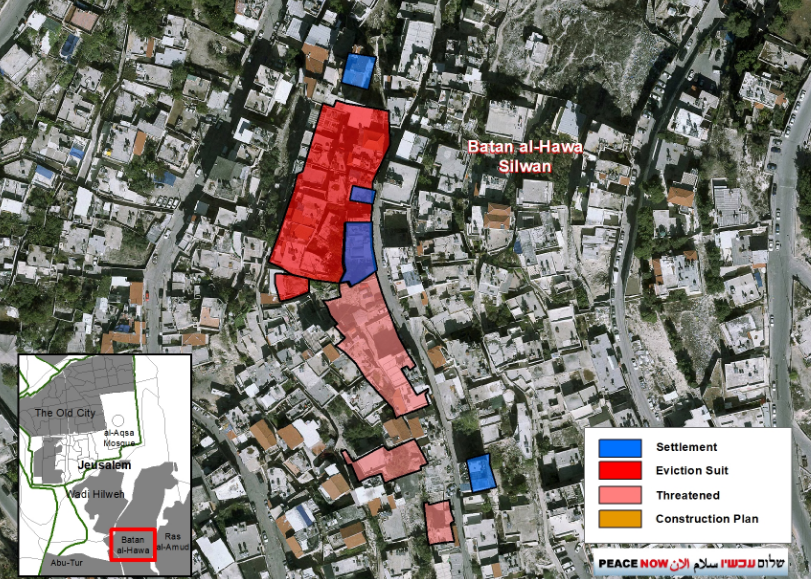 On Sunday, June 10th, the High Court of Justice is expected to hear a petition filed by 104 residents of Batan al-Hawa (Silwan) against the Custodian General demanding the cancellation of the transfer of their land to radical settlers. The petitioners are all representatives of Palestinian families against whom there are pending eviction lawsuits, based on a discriminatory law that permits Jews to reclaim properties in East Jerusalem that they lost in the war in 1948. The petitioners' main arguments are related to the question of ownership of the 19th century Jewish trust that the settlers are claiming to represent today.

The evacuation claims against the Palestinians in Batan al-Hawa are part of a campaign of eviction lawsuits against entire neighborhoods in East Jerusalem (Batan al-Hawa, Umm Haroun and Karem Ja'ouni in Sheikh Jarrah).

See Background here, or read below:

The Systematic dispossession of Palestinian neighborhoods in Sheikh Jarrah and Silwan

For many years, there has been an organized governmental effort to take properties in East Jerusalem from Palestinians and to transfer them to settlers. In the past it was mainly through the Absentee Properties Law, but today the efforts are done mainly by the use of the Legal and Administrative Matters Law of 1970. Until recently, this effort was disastrous for individual families who lost their homes, but now the aim is entire neighborhoods (in Batan al-Hawa and Sheikh Jarrah). Since the horrifying expulsion of the Mughrabi neighborhood from the Old City in 1967 there has been no such move in Jerusalem.

In recent years there has been an increase in the threat of expulsion hovering over the communities of Sheikh Jarrah and Silwan in East Jerusalem. A wave of eviction lawsuits is being conducted before the courts, with well-organized and well-funded settler groups equipped with direct or indirect assistance from government agencies and the Israeli General Custodian.

The basis for all claims is the same: the Legal and Administrative Matters Law enacted in 1970 by the Knesset determined that owners of properties in East Jerusalem that in 1948 were transferred to the control of the Jordanians, can receive it back from the Israeli General Custodian. The law was not applied to Palestinian land owners who lost properties in the same war and in the same circumstances in West Jerusalem, thus only Jews can reclaim their properties while Palestinians cannot.

Examination of the protocols of the legislative process indicates that the legislators viewed a situation in which Jews would be able to return vacant assets, while in cases where the assets were occupied, they would receive financial compensation. The legislators took into account the personal connection of an individual to his property, but in practice, the law is being used by settlers who have nothing to do with the original owners. In the end, a mechanism was created by the government and the Custodian General to exploit the law in order to take control of Palestinian populated areas and to transfer them exclusively to settlers. This is a government move, and an attempt to present it as a personal conflict of property restitution is nothing more than feigning innocence. It is important to note that the Jewish owners of the properties received double compensation: through alternative housing received from the state in 1948, and financial compensation received from the settlers in recent years, aimed at serving the settlers' ideological agenda. This contradicts that legislators' original purpose. The individual right that the law sought to protect was made by the settlers and with the assistance of the General Custodian to the right of one (Jewish) collective at the expense of another (the Palestinian) collective.

1. The court hearings: When the field is crooked, the result is crooked
After the decision to annex some 70 square kilometers to Jerusalem in 1967, the Israeli government was required to deal with the anomalous situation of the residents of East Jerusalem, who found themselves under Israeli rule. This anomaly brought to some legal fictions that in practice are detached from reality.

For example, the status of Palestinian residents of East Jerusalem as permanent residents of Israel was regulated by the Entry into Israel Law, as if they had recently come to Israel and had not lived here for years, and Israel was the one to “come” to them; or the Absentee Property Law applied to assets in East Jerusalem whose owners live in the West Bank, sometimes only a few meters from the property they own.

The same applies to tenants living in properties that were owned by Jews prior to 1948: the ruling in courts determined for many of them that they enjoy the rights of protected tenants, and the proceedings before the court are conducted as if an ordinary civil dispute is taking place between a landlord and a tenant. There is nothing far from this, since this is an organized governmental effort that does not have any connection to the purpose of the Tenant Protection Law. Only by turning a blind eye can one ignore the real context of the proceedings.


A discriminatory law: The circumstances of the legislation of the Legal and Administrative Matters Law (1970)
The Legal and Administrative Matters Law of 1970 was legislated in order to deal with many different issues concerning the areas and people annexed to Jerusalem in 1967. One of those issues was the status of properties owned by Jews before 1948.

In the 1948 war some 20,000 Palestinians fled or were forced to leave their homes in West Jerusalem, and about 2,000 Jews fled or were forced to leave East Jerusalem, mainly from the Jewish Quarter of the Old City. The Law and Administrative Matters Law was intended to correct what it considered to be a historical injustice by restoring the property to its original Jewish owners. However the law was not applied to Palestinian properties, and it turned out that in one city, as a result of one war, two populations lost property, yet only one national group is entitled to repair the historical injustice and return its property, while the second population cannot, even if some individuals live just a few hundred meters from their properties in the western part of the city. This is the original sin of the law and of the settlements in Batan al-Hawa and Sheikh Jarrah.

The law was not meant to be applied to inhabited properties
Examination of the protocols of the legislative process indicates that the legislators viewed a situation in which Jews would be able to return vacant assets, while in cases where the assets were occupied, they would receive financial compensation.

In the first reading of the bill on July 29, 1968, the Minister of Justice concluded:

Assistance of the Custodian General - In Um Haroun (Sheikh Jarrah) for example, in past years the representatives of the Custodian General (CG) made tenants sign contracts claiming they are no longer protected tenants. The CG interprets the Protection of Tenants Law in a strict way using every opportunity to take the protected status from the tenants. In the last two years the CG issued several eviction lawsuits and sent letters threatening to evict Palestinian tenants.

In Batan Al-Hawa, the Custodian General issued a certificate of release to the settlers who took over the management of the Jewish trust in 2001. In 2014 the settlers lost an eviction lawsuit against the Abu Nab family, because they failed to prove the borders of their property. At the time between the verdict and the appeal's hearing, the General Custodian issued a revised release certificate detailing the precise boundaries of the plot. Thanks to the new paper given by the Custodian, the settlers managed to win the appeal and the family was evicted from the house. Since the amended release certificate was issued in 2015, the settlers have filed another 9 claims against dozens of families.

In addition, it turns out that in December 2005, the Custodian General sold to the representatives of the Jewish trust four additional plots that were owned by other Jews in Batan Al-Hawa, without a tender and at a low price. If the Custodian was indeed interested in selling the assets in good faith, he would have had to make a tender and offer the Palestinian residents of these properties the right to purchase them. But instead the custodian transferred under the cover of darkness four plots on which dozens or even hundreds of Palestinians live in the Batan Al-Hawah neighborhood to settlers who seek to evict the Palestinian residents and settle Jews there.

The government has several ways to prevent the evictions and the injustice:

(The last two options are unlikely under the current government and Knesset.) 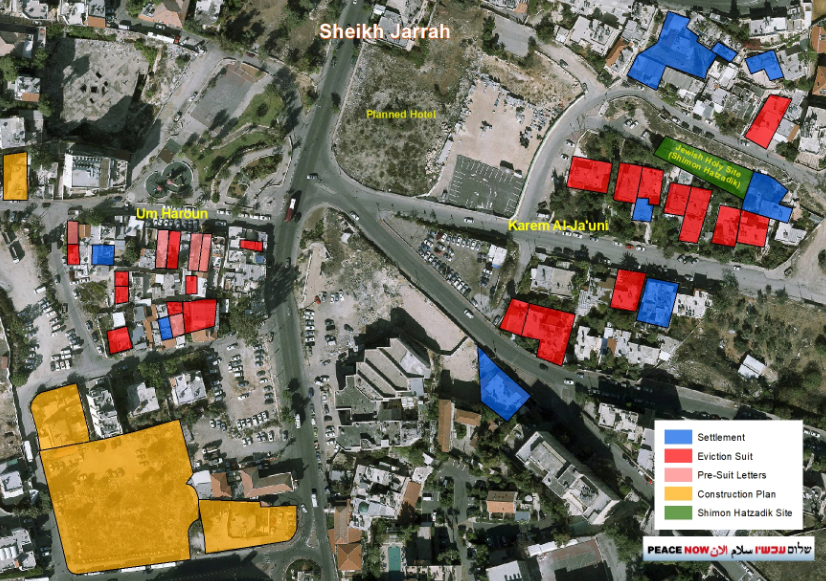