Tomorrow the Jerusalem Local Planning Committee is expected to approve the construction of a large building for settlers in the heart of the Batan Al Hawa neighborhood in Silwan. The three story building will be located in one of the most densely populated areas in East Jerusalem, near the Yonatan House (see map). The land in the area was sold to the settlers by the Israeli General Custodian without any tender, together with three additional parcels in the neighborhood (Parcels 73, 75, 84, 97). The pretext for selling the land to the settlers was the fact that they already own two other parcels in Batan Al-Hawa (parcels 95-96) that were released to them by the General Custodian in September 2002 (see more here).

Peace Now: While PM Netanyahu and MoD Lieberman just backed the two state solution, on the ground they are supporting actions that are making a future compromise much more difficult. They government can still prevent the construction of the house by withdrawing from the deal of selling the four parcels to the settlers. By approving the construction on the Eve of Ramadan Netanyahu and Lieberman risk igniting the region and compromising Israelis' security for the benefit of extreme settlers. 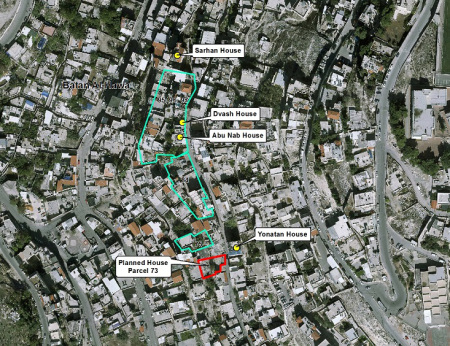