Today (October 5th, 2016) Peace Now and Ir Amim jointly released a new report on settlement planning in one of the most sensitive and volatile areas in Jerusalem, in a Palestinian neighborhood in the heart of Silwan. The report,  "Broken Trust: State Involvement in Private Settlement in Batan Al-Hawa, Silwan." The report describes how, since 2001, the Ateret Cohanim settler organization has been working to transform Batan al-Hawa into a large Israeli settlement through sales without tender, questionable acquisition of Palestinian properties, forced eviction and removal of Palestinian families who have lived in the neighborhood for decades. If the settlers are successful, Batan al-Hawa will become the largest settlement compound in a Palestinian neighborhood in the Historic Basin of the Old City,  significantly tightening the emerging ring of settlements around the Old City, creating,"an irreversible reality" and severely undermining the possibility of a future two state solution.

Batan al-Hawa, situated in the heart of  Silwan just outside the Old City, is now the site of the largest attempted settler takeover in East Jerusalem, threatening to displace 100 families – roughly 600 Palestinians – from their homes.  By the end of 2015, The settler organization Ateret Cohanim had quadrupled the number of housing units in its possession, taking over a total of some 27 units in six buildings in the neighborhood. In addition, 12 currently pending eviction claims threaten an additional 51 families.  This well organized Ateret Cohanim campaign represents not only the displacement of an entire community but also the complicity of the Israeli government in facilitating private settlement in the Historic Basin.

The settlement in Batan al-Hawa is an integral part of efforts by settler organizations and Israeli authorities to consolidate Jewish control of the Old City and the surrounding Palestinian neighborhoods, to create an irreversible reality in the Holy Basin around the Old City that deliberately subverts efforts to negotiate an agreed political resolution on Jerusalem.

Our report reveals that the government has acted through the General Custodian and the Registrar of Trusts (both under the Ministry of Justice) to facilitate settlers’ seizure of Batan al-Hawa, as well as providing roughly one million shekels each year to fund private security to radical settlers in the hearts of Palestinian neighborhoods in East Jerusalem.  At the same time, the State’s privatization of national parks around the Historic Basin to settler organizations enables the cooptation and politicization of archeology, the erasure of Palestinian history and neighborhoods, and the dissemination of a one-sided, nationalist, narrative to hundreds of thousands of Israelis and tourists each year.  This trend must also be understood as an essential component of the settlement enterprise.

Today, there are 142 settlement sites in the Historic Basin. Since Netanyahu was last elected, 40 new sites have been added (an increase of 39%) and among them approximately 778 settlers (39%).  Four sites were added in the Old City, 31 in the Historic Basin, and another 5 in the rest of the Palestinian neighborhoods of East Jerusalem.

The following chart reveals the steady gains made by the settlers over the last several years: 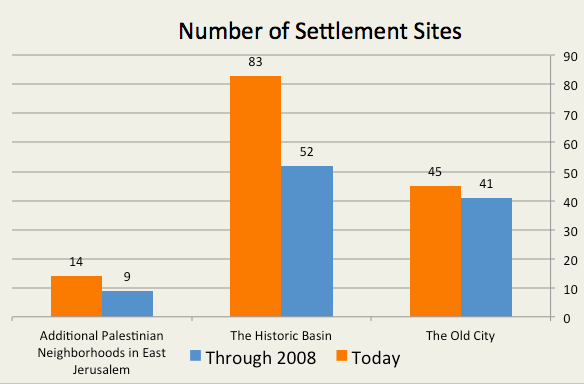 Since 2009, there has been an approximate twofold increase in the number of housing units held by settlers in the Historic Basin, a roughly 70% increase in the number of settlers and the eviction of another 60 Palestinian families: in Sheikh Jarrah and in Silwan (Wadi el-Hilweh and Batan al-Hawa). Another 8 families were evicted from the Muslim Quarter of the Old City.

Approximately 300 families are still under threat of eviction/demolition in the Historic Basin, the majority of whom are threatened by the Ateret Cohanim operation in Batan al-Hawa.

The emerging reality is disastrous not only for the residents of Batan al-Hawa, but for the possibility for a political solution to the conflict.  All efforts must be taken to halt this trend – a mechanism being used to pre-emptively plant new facts on the ground, further crippling opening conditions for negotiating a two state solution.