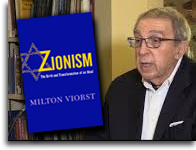 Since I began covering Israel and its Middle East neighbors in the wake of the Six-Day War of 1967, it has been apparent to me that an enduring peace is possible only after Jews and Arabs reach a point of mutual respect and understanding. This objective has over the ensuing years has proven extremely elusive. Both societies have staked territorial claims that leave little room for the interests of the other. Both overlook the fact that history does not stand still, not in the Middle East or anywhere else, and that territorial claims are not sacred. If Jews and Arabs do not respond to changing conditions, and embrace a vision of social justice, both surely risk destruction. Peace Now -- Shalom Achshav in Hebrew -- has recognized that truth since its founding thirty-five years ago.  As a Zionist, dedicated to the ideal of a homeland for the Jewish people, I applaud the struggle that Peace Now wages for the well-being of the two peoples who live in Palestine.

Milton Viorst most recent book is Zionism: The Birth and Transformation of an Ideal. It examines Zionism from the sowing of its seeds in enlightenment Europe centuries ago to the establishment of a nation state in 1948 to the widespread criticism to which it is subject today for an unduly harsh policy toward its Palastinian neighbors. Zionism is Viorst's sixth book on the Middle East. He was the Middle East corespondent for the New Yorker and has written on the Middle East for the New York Times, the Los Angeles Times and the Washington Post, as well as The Atlantic, Time and The Nation. He served on the faculty at Princeton as a Ferris Fellow. He lives in Washington with his wife, Judith, a celebrated poet.