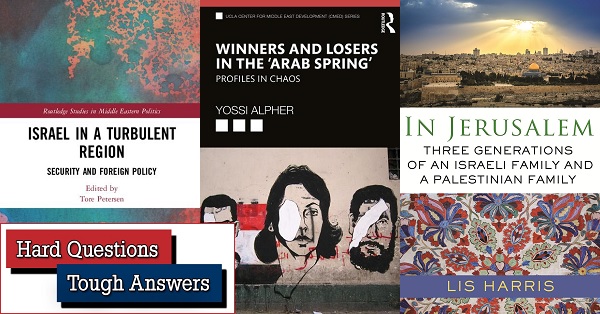 Q. It’s a little late (or early) to recommend holiday reading, but go ahead. This could be a welcome break from what look like unpleasant and disappointing Israeli coalition negotiations. Perhaps you’ll start with an “oldie”, a well-established work that you think is worth revisiting for its relevance at this juncture?

A. Like George Orwell’s 1984, Barbara Tuchman’s The March of Folly, which coincidentally was first published in 1984, is particularly timely in these days of Trump and Netanyahu.

Consider Tuchman’s definition of “folly” for her inquiry into the makings of destructive and counter-productive policy in strategic arenas like Vietnam in the 1960s and 1970s. First, folly “must have been perceived as counter-productive in its own time”. Second, “a feasible alternative course of action must have been available”. And third, “the policy in question should be that of a group, not an individual”. Apply this definition to the drive by Israel’s mainstream nationalist right wing led by PM Netanyahu to swallow up the West Bank. Apply it to the Trump administration’s policies almost everywhere: Iran, Russia, China, the Israeli-Palestinian conflict . . . .

Q. Did all of Israel’s recent anniversaries--a century to the Balfour Declaration, 70 years to the founding of the state, 50 years to the Six-Day War--generate any sort of comprehensive reevaluation?

A. Israel in a Turbulent Region: Security and Foreign Policy, edited by Tore T. Petersen (Routledge, 2019), was conceived precisely with those anniversaries in mind. Particularly contemporary are the book’s chapters on Israel’s relations with the Gulf states and Yemen, and its “great leap forward” into Asia.

The latter chapter, “Breakthrough”, by Yitzhak Shichor of the Hebrew University and University of Haifa, chronicles Israel’s impressive diplomatic and economic achievements in Asia in recent decades. Shichor, who has followed Israeli-Asian ties since the 1970s, relates how in 1948 not a single Asian country recognized the nascent Israeli state. One exception, Ceylon (today, Sri Lanka) “decided to recognize Israel in July 1950, but the decision was kept secret--also from Israel.”

The pre-1990s chronicle of desperately slow progress continues with, for example, Singapore establishing diplomatic relations in May 1969 but not maintaining an embassy in Israel to this day (there is a consulate-general in Tel Aviv). I found this particularly interesting because I recall my very first acquaintance with Israel’s far more developed clandestine relations (as opposed to overt, diplomatic ties)--in Asia, the Middle East, Africa and elsewhere. In 1965, as a young IDF warrant officer, I was recruited to translate from Hebrew to English the IDF Engineering Corps plans for Singapore’s first military base, part of a budding Israeli-Singaporean security relationship that continues to this day.

Shichor goes on to describe dramatic breakthroughs in Israel’s relations with China, India and other Asian nations following the collapse of the USSR and the advent of the Oslo process. Yet, “Israel has so far failed in changing the traditional pro-Arab and pro-Palestinian attitudes of the Asian countries.” Nevertheless, bilateral relations with Israel have expanded dramatically, including in the hi-tech and defense spheres. For Asia, he concludes, “establishing diplomatic relations” while ostensibly maintaining pro-Arab attitudes is “an optimal solution, a win-win situation or, to use traditional Chinese terminology, a realistic (rather than idealistic) yin-yang balance between contradictions.”

A. Arik: the life of Ariel Sharon by David Landau (2014, Alfred A. Knopf), tells the Sharon story from a fairly objective viewpoint. Landau was a long-time journalist and served as editor of Haaretz. He has no specific issues with Ariel Sharon and recognizes in him a pivotal figure, warts and all, in Israeli security and political life.

Sharon was the last Israeli leader to have a go at dismantling settlements, in 2005 in Gaza and a small portion of the West Bank. He had also been responsible for building many of these settlements, and that is hardly the only contradiction in his political life. He became prime minister in 2001 after a lifetime of frequently brutal military operations that were short on sound strategy, and following many years of right-wing politicking long on demagoguery. By 2002, he was preaching territorial compromise to the Israeli public. Yet when President Bush created the Roadmap for a managed peace process, Sharon preempted with unilateral withdrawal because he never really trusted the idea of peace with any Arab neighbor.

Had he not suffered a crippling and eventually fatal stroke shortly after the Gaza withdrawal, he would have continued redrawing the West Bank settlement map and opening up space for a Palestinian state. But he would have done it unilaterally: he never trusted the Arabs or their leaders. Who knows where that would have left us?

A. The Israeli Settlement Enterprise in East Jerusalem, 1967-2017, is by Daniel Seidemann of Terrestrial Jerusalem. For a host of NGOs, diplomats and journalists, Seidemann is far and away the Israeli authority to talk to about the central role of the Jerusalem issue in Israel’s global, regional and domestic treatment of the Palestinian issue.

This book, with a handy glossary 24 pages long (everything from Abu Dis to UNRWA and Waqf), covers the relevant Jerusalem issues thoroughly. It begins with “Israeli Actions in the Wake of the 1967 War” such as expanding the boundaries of “United” Jerusalem, and goes on to detail waves of East Jerusalem Jewish settlement projects. By the by, it discusses “The Limits of Legal Recourse” and Jerusalem-related permanent status issues.

Seidemann concludes that “[T]oday, more than 215,000 Israelis--40% of East Jerusalem’s total population--reside in settlement neighborhoods and enclaves. Geographically, contemporary East Jerusalem resembles an archipelago of Israeli and Palestinian built-up areas, cohabiting ‘cheek-by-jowl’ and often separated by no more than a secondary road a few meters wide. All of this has come at the expense of Palestinians. . . . [Jerusalem] is not merely a binational city, but one that is located at the epicenter of a . . . conflict that has the very real potential to morph into a brutal religious conflict, with regional and global ramifications.”

In Jerusalem: Three Generations of an Israeli Family and a Palestinian Family, by Lis Harris (2019, Beacon Press), offers a very different and quite engaging take on Jews and Arabs in Jerusalem. These are the observations and musings of a veteran journalist who spent years in Jerusalem. Harris, looking for balance, offers fascinating details about several generations of the two extended families whose lives she follows: the Palestinian Abuleils and Odehs and the Israeli Pinczowers and Ezrahis.

Harris’s book notes no sources; it is entirely her story and her insights into Arab and Jewish life in the city. Refreshingly, she makes no attempt to reach grand strategic conclusions. “My goal,” she states, “has not been to try to unravel the Gordian knot that keeps the country’s never-ending problems seemingly and confoundingly unresolvable. . . . Instead, I hope to register the conflict’s effect on the lives of successive generations on each side, the people who are the cogs of history.” Notably, there is an excellent bibliography of source material for anyone who wants to pursue the issues.

Q. To conclude, anything new by you?

A. Routledge just published my Winners and Losers in the ‘Arab Spring’: Profiles in Chaos. It’s my take, written over the past three years and updated to early 2019, on the role of outside actors in the revolutionary chaos that has characterized the Middle East since 2011.

Putin, Netanyahu and Iranian Quds Force Commander Qasem Soleimani are winners. They skillfully exploited the chaos in Syria (Netanyahu, in Egypt as well) to improve their countries’ strategic position. Note that Netanyahu’s inclusion in this group says nothing about his disastrous handling of the Palestinian issue. But he understood at an early juncture that Arab disarray and fragmentation downgraded that issue to a side-show in the eyes of many Arab rulers, while Iran’s exploitation of the chaos rendered Israel a desirable (usually clandestine, nevertheless important) ally despite the Palestinian cause.

Not a single Arab monarch has been overthrown in the tumult of the past eight years. They are all winners, though it is the uber-wealthy Gulf rulers who have thrown their money around to survive more handily than, say, the kings of Jordan and Morocco. Here a special “winner” prize goes to the United Arab Emirates, which has astutely projected power way beyond its weight-class, throughout the region.

The obvious losers are assassinated Arab rulers like Libya’s Moammar Qaddafi and Yemen’s Abdullah Saleh. Equally obvious “losers” who nevertheless did not pay a price are US presidents George W. Bush, who launched the chaos by invading Iraq in 2003, and Barak Obama, who misread the US role in Syria, Iraq and Libya and mistakenly welcomed Islamist claims to power in Egypt and Turkey. Less obvious losers are non-politicians like the French “public intellectual” Bernard-Henri Levy, whose ignorant intervention in Libyan revolutionary politics helped bring about that country’s collapse: 2011 and still counting.

And Donald Trump? He has not made any major error in the region beyond pulling out of the Iran nuclear deal, and even that project is still a work in progress and is not connected directly to the ‘Arab Spring’. But nor can he point to any major success. His reluctance to sanction US military intervention has kept him out of big trouble. His machinations against Iran could yet produce either a disastrous war or a nuclear deal with face-saving changes. The jury is still out.