APN Mourns the Passing of Longtime Board Member Sidney Topol

Washington, DC -- Americans for Peace Now mourns the death of Sidney (Sid) Topol, our beloved longtime Board member, an avid advocate for peace, an inspiring leader of the pro-Israel pro-peace movement in the United States, a progressive philanthropist whose sharp mind and kind heart helped energize our movement for more than four decades.

APN's Chair of the Board James Klutznick said: "Whether at the gala honoring him, breakfasts at the Ritz-Carlton, or in his kitchen in the Back Bay, where Debra DeLee and I joined him for an APN Board meeting call, Sid was both a hawk for peace and conflict resolution, and a down to earth good guy with a generous heart, a grin on his face, and a twinkle in his eye. He will be missed, but not missing from our hearts and minds."

APN's President and CEO Hadar Susskind added: "Sid for us was a compass, both politically and ethically. He was deeply immersed in Israeli-Palestinian politics and intensely passionate about advancing peace between Israelis and Palestinians, both diplomatically and on the grassroots level. His intensity was infectious, and through his exceptional mastery of digital communications, he motivated many to continue caring and staying active in the movement. Sid gave generously to advance peace and yearned for it. He used to say that his fondest wish is to sit on the White House lawn for the handshake that would seal the Israeli-Palestinian peace agreement. Unfortunately, he did not live to see the day. He leaves our movement a life-long legacy and a testament to follow in his path and redouble our efforts to advance Israeli-Palestinian peace."

Sidney Topol was a pioneer in television and satellite technologies. His career as Chairman and CEO of Scientific Atlanta spanned the nuclear age and space age, helping to spur the globalization of telecommunication. In recognition of his contributions, Mr. Topol has been inducted into several technology Halls of Fame. His time, energy, and resources generously support a broad range of organizations and academic institutions working for peace in the Middle East, human and civil rights, social justice, and nonviolence. His most recent project in that realm was funding programs to create leaders of non-violence at ten universities in the United States and Israel. 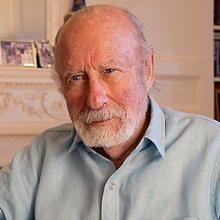