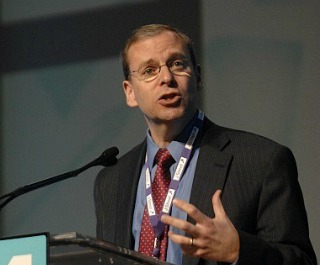 As one of a handful of members of the Conference who focus on peace and security for Israel, and who work to open the conversation on Israel within America's Jewish community, APN was looking forward to the significant contribution that J Street would have made as a member of the organizational Jewish community's umbrella group.

The results of the vote show that too many in the organizational Jewish community have simply lost touch with the current reality in their own community – a reality that organizations such as J Street credibly reflect.

The results of yesterday's vote are a loss to the Conference as an organization and to all its member-organizations. J Street gives voice to many American Jews – mostly younger – who are independent thinkers, who because of their love and dedication to the state of Israel take issue with policies of its government that threaten Israel's future. Rejecting an organization that gives voice to so many pro-Israel Americans is a disservice to our pro-Israel community, to the umbrella organization that presumes to represent it, and to the state of Israel itself.

As the sister-organization of the Israeli peace movement Shalom Achshav (Peace Now), we are thoroughly aware of the sad irony that yesterday's vote underscores: Israel's public arena is so much more tolerant of dissenting voices than America's organizational Jewish community.

Yesterday's vote also points out the inadequacy of the Conference of Presidents' procedures, rules and regulations. The disproportionate power that very small member-organizations enjoy comes on top of lack of transparency, an unreasonable admission process, a distorted decision-making process, and problematic procedures in regards to expressing the views of the organization.

Out of concern for these inadequacies, APN launched, several months ago, an effort to reform the Conference of Presidents' rules and procedures.

APN's Board of Directors will weigh its options in regards to our organization's relationship with the Conference of Presidents.