Book Review: Killing A King: The Assassination of Yitzhak Rabin and the Remaking of Israel 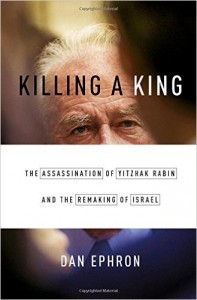 A heartbreaking chronicle of the circumstances leading to and following from the assassination of Israeli Prime Minister Yitzhak Rabin, Killing A King is a brilliant and comprehensive analysis of the quest for peace between Israel and the Palestinians, and of the ultra-Orthodox opposition to that quest. While the subtitle, The Assassination of Yitzhak Rabin and the Remaking of Israel, might sound grandiose to some, Ephron in fact convincingly proves the case that Rabin’s assassination catalyzed the remaking of an Israel increasingly dominated today by right-wing political and religious extremists. In his telling, even-handed though he may be, they are the primary if not the only villains of the piece.

Killing A King begins with a prologue that introduces the main players, Yitzhak Rabin and Yigal Amir, by contrasting their lives on the day of the assassination, setting in motion the back story before plunging into the narrative proper. Here we not only meet the main protagonists, but also are introduced to Ephron’s thesis: “Through the lens of the murder, much can be gleaned about Israel today.” (xii) He proceeds in a novelistic “fly on the wall” style to recount the social and historical contexts for Rabin’s achievement of the 1993 Oslo Accords, despite his discomfort with the Palestinian Liberation Organization (PLO) leader Yasser Arafat. Incidental interactions among Israeli negotiators and factions focus on the personal animosity between Rabin, Shimon Peres and their respective contingents. Peres’ competitive antagonism toward Rabin ultimately would prove fatal to any peace agreement.  Very quickly, however, the reader meets the anti-Oslo extremism that would lay the foundation not only for the demise of Oslo, but for any hope for a lasting peace between Israel and the Palestinians.  From the outset, Amir emerges as little different from Islamic terrorists whose rage is directed against a secular, Western-oriented world.

Hence, Ephron begins his study of this tragedy by preparing us to understand the complex circumstances in which the heroes and villains of two irreconcilable visions of a secular or a religious state of Israel fatally interacted. Each personality, whether primary or secondary, is placed in contexts which demonstrate both the unpredictability and unknowability of events, and the horrifying truth that a single act of terrorism carried out in a frenzied climate of hate and mistrust can change the course of history.  While this notion skirts dangerously close to a “great man” theory of history, Ephron is careful to avoid that trap.  He is scrupulous in establishing a larger narrative that demonstrates the confluence of fanaticisms, and the fatal consequences of the assassination itself.

Personalities and events are clearly and succinctly described in a journalistic style that builds the tension that finds its denouement not only in the assassination itself, but in the triumph of those whose anti-Palestinian, biblically based ideologies came together to annihilate the political will for any Israeli-Palestinian peace agreement.  The grand picture is built from small incidents reinforced by the telling anecdote and revealing personal characteristics that impact on the arc of the narrative. While emphasizing the acts and motives of individuals-- from Rabin to Amir, from the head of Israel’s security apparatus to the Prime Minister’s personal driver—each is placed within the flow of events. That this is the author’s approach to establishing the broad picture from carefully connected individual strokes is demonstrated by the attention given to Amir’s brother Hagai; to Amir’s friends and fellow travelers; to the politics of the Settler Council (The YESHA Council); to Rabin’s fatal refusal to wear protective clothing; to the anonymous policeman who unwittingly misled witnesses to the assassination; to the members of the General Security Services (Shabak) who failed to guard and protect; to those same agents who ignored the intelligence gathered by their own mole, Avishai Raviv, and the description of Amir as a potential danger.  Typical of Ephron’s method is the way in which he introduces and slowly builds an ambiguous portrait of Raviv, without indicating his role until it becomes absolutely crucial to the investigation of the assassination.

Equally characteristic is the care with which Killing A King charts the confluence of fanaticism that binds Ultra-Orthodox Jews, many of them settlers, and their rabbinical counselors.  This class, in Ephron’s words, “seemed to have come unhinged” (63) after Oslo, increasingly focused on a messianic “redemption fixation” (65) based in biblical text that promised a God-given right to the West Bank (Judea and Samaria). The most chilling and riveting exposé of how ideology trumped objectivity among this cohort is the massacre carried out by the religious zealot Baruch Goldstein of the settler community Kiryat Arba at the heart of Hebron. Goldstein’s 1994 murder of 29 Palestinians and wounding of scores more at the Cave of the Patriarchs marked a turning point in right-wing religious violence, both for Israel and Amir. It also occupies a pivotal role in Killing a King. Goldstein’s successful prosecution of fanatical religious convictions served as a model and a religious justification for Amir.  In the first instance, he observed the political effectiveness of the settler community, able to further and defend its interests without serious opposition from the elected secular government; in the second, he found in the responses of many rabbis serving settler communities and in the communities themselves justification in Talmudic law for killing anyone who threatened the Jewish people.

That justification would become central to Amir’s growing conviction that Jewish law demanded the murder of Rabin: insofar as Rabin intended to carry out the conditions of the Oslo Accords, ceding land to the Palestinians, and insofar as he considered evacuating the Hebron settlements after the massacre, he represented an existential threat to the Jewish people and the state of Israel.  His murder thus was justified according to the law of din rodef (“law of the pursuer”), for he was a moser, that is, one who handed over Jews to a hostile power (din moser).  Amir saw an Israeli withdrawal from the West Bank solely in religious terms, but he was not alone.  Rather, though not of the settler community himself, Amir belonged to an affiliation of hardliners, not limited to religious zealots, but including politicians such as Benjamin Netanyahu, who early allied himself with those whose harsh invectives against Rabin encouraged opposition to a secular government and an unbending rejection of Palestinian autonomy.

A less dramatic lesson from the Hebron massacre included evidence that the security forces could not identify a lone gunman in advance. More dramatic was the appearance of government impotence: despite Rabin’s political power and contempt for settle‘s post-1967 messianic claims to all of biblical Israel, he was powerless to defuse their resistance. As if that in itself didn’t confirm the political clout of the settlers’ YESHA Council, religious right extremists lionized Goldstein as a saint with the courage to carry out a heroic act (73), providing Amir additional confirmation that his was a just and necessary cause.

The Palestinian response to the Hebron massacre was no less intense, inaugurating a series of suicide attacks into the heart of Israel, providing cover for the religious right’s unbending opposition to any rapprochement with Palestinians, and for Orthodox rabbis’ affirming the right of soldiers to refuse orders to act against Jews.

The religious fanaticism that finds its rationale in the belief that God’s will can be known, even directed by a true believer is at the foundation of Yigal Amir’s act and his arrogant non-repentance. If Killing A King accomplishes anything, it is to establish the poisonous atmosphere that led to the success of one man who did not fit the profile of a radical actor from the settler community, and to expose the irony of sworn enemies-- Jewish and Palestinian zealots--successfully destroying the chance for an Israeli and Palestinian state existing side by side. That the enemy was perceived by both camps as the secular state in the person of Yitzhak Rabin is a tragedy, but perhaps not as much a tragedy as the failure of Rabin’s successor, Shimon Peres, to capitalize on massive support for peace prompted by the assassination, and the consequent rise of Benjamin Netanyahu, whose toxic rhetoric galvanized the religious right and its anti-Palestinian racism, as it continues to do today.  Perhaps most disastrously, the political and religious hopes and tensions that informed those heady days have subsided to the degree that secular Israelis today pay little heed to a quest for peace, content to live comfortably in what is effectively a garrison state.

Later chapters focus on the character and convictions of Rabin, Peres and Netanyahu.  Though it is not hard to imagine Peres’ supporters objecting vigorously to Ephron’s portrait of him, Peres literally embodies the role of a tragic figure in the Greek sense, a figure whose unconscious fatal flaws prevented him from rising above personal competition with Rabin and led to the fatal weakening of secular government in Israel.  Those flaws, combined with Netanyahu’s tactical political skills resulted in a “win” for Arab and Jewish forces of violence and enmity.  As for Amir, for all that his act propelled the subsequent events, he is nothing more than a pathetically ordinary loner seduced by self-righteousness and religious zealotry. Those who knew him best judged him a braggart incapable of carrying out his threats.  One is reminded of Arendt’s “banality of evil.”

In the last analysis, Killing A King demonstrates beyond denying that forces beyond our control, arbitrary and unpredictable events determine outcomes, and above all, that the psychology and life experiences that shape men also shape history. This is a thoughtful, compelling study, essential to understanding the Israeli political arena and psyche today. Read it.