The Palestinian News agency Ma'an reported yesterday that the Civil Administration issued a new order determining state land boundaries in the settlement of Eli.
The order is a result of the work of the Civil Administration's Blue Line Team which works to correct inaccurate state land declarations made during the 1980s. According to the new order, 2,781 dunams of the lands of the villages Lubban al Sharqiya, Karyut and Al-Sawiya are now considered state lands, 596 dunams of which were not considered state lands according to the old declaration. Additionally, 590 dunams were detracted from the old declaration.
Peace Now: This is a new land expropriation, even though the government refers to it as a 'correction of state land boundaries.' The new procedure of announcing the results of the Blue Line Team's work exposes only a fraction of the land takeover that occurred in the last decade without any public knowledge. Under the excuse of technical corrections, without publication and without the knowledge of Palestinian landowners, tens of thousands of dunams of private Palestinian lands had become state lands for the purpose of settlements. While the public and legal debate were focused on settlement building on private Palestinian lands, the real story has been the government's massive and systematic state land declarations through the Blue Line Team's work. The Netanyahu government continues to sabotage the chance for peace and crosses many red lines avoided by previous governments such as massive land expropriations meant for settlement expansion. 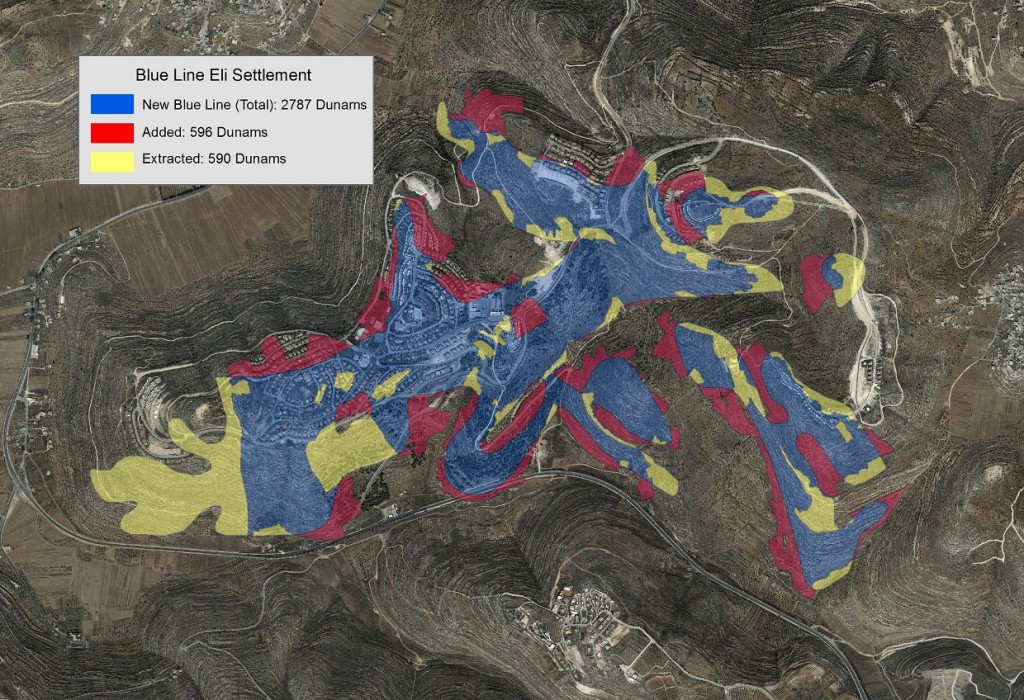 Following a petition of land owners together with Bimkom and Yesh Din against the approval of a new plan in the settlement of Eli, the State announced a new procedure of the publication of results of the Blue Line Team's work. The petitioners argued that any change in the boundaries of previously declared state lands constitutes a new declaration and that landowners should be permitted to appeal it, similarly to the case of a new declaration. The new procedure indeed publishes the new map but the possibility to appeal remains restricted with high prerequisites and without an impartial body to discuss the appeals. The High Court has not approved the new procedure yet and the petition is still ongoing.

On December 23rd of last year the Civil Administration published six orders based on the new procedures regarding changes in blue line boundaries in Migdalim, Kiryat Arba, Shima'a , Tene, and in the area by the Tarqumia checkpoint. 6,681 dunams were announced as state lands, out of which 1,384 dunams were not included in the original declaration. Approximately 962 dunams were detracted in these declarations. Overall we see a 26% increase to the area declared as state land, and a deviation of 44% of the original blue line, declared during the 1980s.

Information obtained from the Civil Administration through a freedom of information request shows that in recent years the Blue Line Team examined boundaries of 290 different declarations and determined the boundaries of state lands totalling 268,000 dunams. If the recent announcements, in which one quarter of the land was not included in the original declaration, is any indication, then we are looking at around 70,000 new dunams declared as state lands without the knowledge of the public or the land owners.
See the announcement on the changes of boundaries in Migdalim as example for the new order.