Earlier this week the Palestinian Media reported on a new expropriation order in the lands of the village of Al-Zawiya. This order was published based on the State's most recent publication procedure of the Blue Line Team's work.

While the original declaration in this area included 1,264 dumans, the current order, following the work of the Blue Line Team, adds another 115 dunams that are now declared as state lands. The order also deducts 213 dumans that are no longer considered as state lands, and yet 30 of the 213 dunams have already been expropriated for the purpose of the "Cross Samariah" highway.

The context of the announcement is likely to be the establishment of a new large industrial zone named "Sha'ar HaShomron" adjacent to the Green Line, by Rosh Ha'ayin. The Shomron Regional Council, Elkana and Oranit, are expected to benefit from the new property tax revenues resulting from the establishment of new factories in the area. 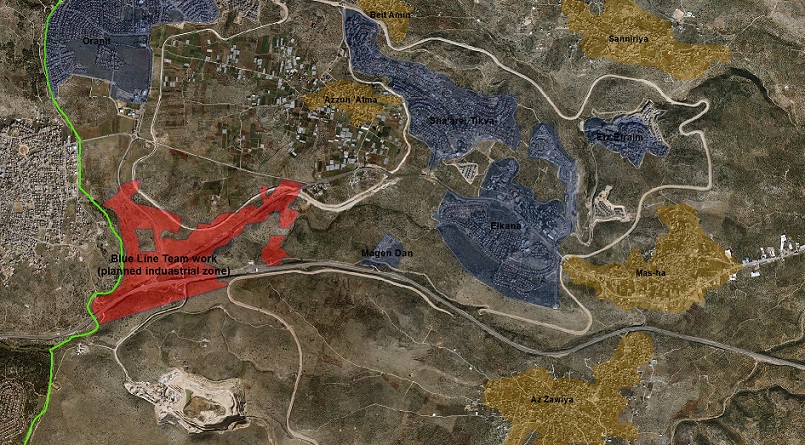 The Blue Line Team And Announcement of State Land Declarations

Following a petition of landowners together with Bimkom and Yesh Din against the approval of a new plan in the settlement of Eli, the State announced a new procedure of the publication of results of the Blue Line Team's work. The petitioners argued that any change in the boundaries of previously declared state lands constitutes a new declaration and that landowners should be permitted to appeal it, similarly to the case of a new declaration. In response to the petition, the government announced a new procedure by which Blue Line Team amendments would be published and the public would be given the opportunity to submit its reservations – but the procedure does not allow for appeals similar to the appeals of state land declarations.