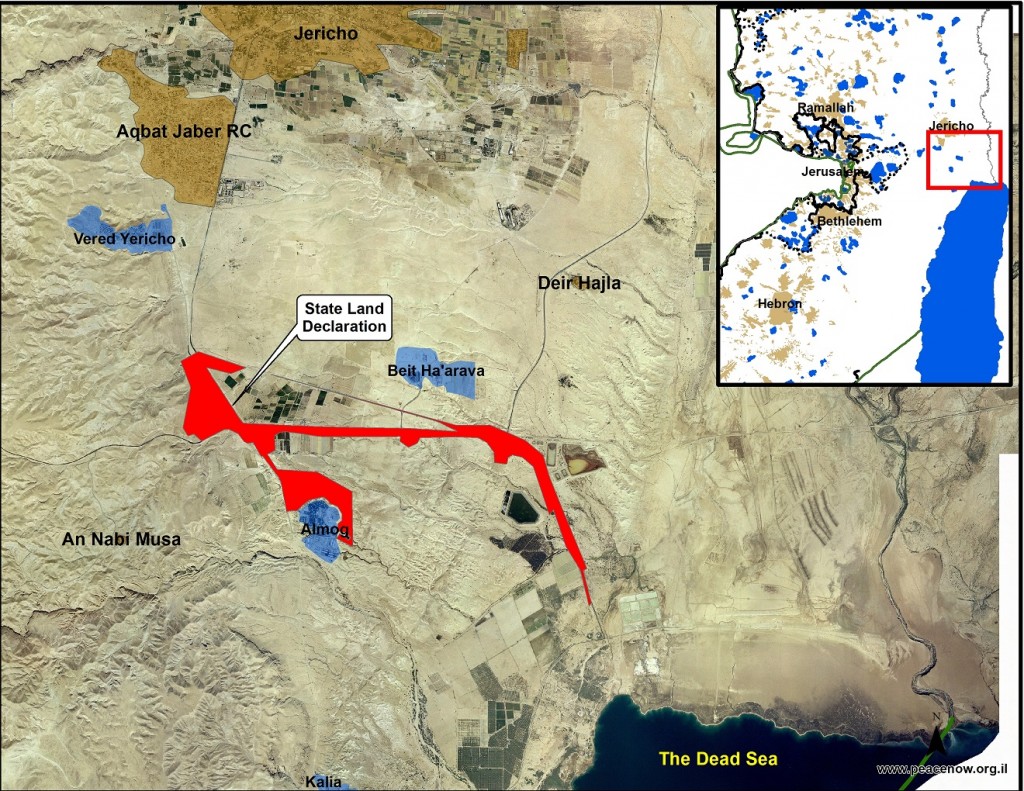 Scope of state land declarations:
In August 2014, close to 4,000 dumans were declared as state land in the Bethlehem area, something which lead to massive international criticism on the Israeli government. In April 2014, another 1,000 dumans in the Bethlehem area where declared as state lands. These two declarations where highly unusual, as in the last several decades Israel’s policy was not to take over additional lands for the purpose of settlements. The current declaration illustrates the fact that Israel has changed its policy and returned to the method of land confiscation through large-scale declarations of state lands implemented in the pre-Oslo period during the 1980s.

Location of the declaration:
The area south of Jericho is located deep in the West Bank and far beyond the green line and the separation barrier. In recent years the struggle over control over the corridor between Jerusalem and Jericho has highly intensified. The Israeli government increased demolitions of Bedouins along route 1 (between Jerusalem and Jericho) and at the same time it continues to promote plans for the expansion of settlements along the road, including in Ma’ale Adumim and in E-1. The declared area is at the eastern edge of this corridor, and control over this area is meant to split the West Bank in half and prevent the possibility to establish a viable and contiguous Palestinian State.

An Update on Peace Now's Derech Ha'Avot Petition Hearing
Yesterday a hearing took place at the High Court on Peace Now’s petition on the illegal outpost of Derech Ha’Avot. During the hearing the State declared its intention to conduct a First Registration procedure with regards to 10 of the structures and to evacuate the other 7 within two years. We argued that a First Registration procedure is only meant to further delay the evacuation and that the legality of its implementation following a land survey is questionable. During the hearing the question of whether the team established by the state to handle legalization of illegal outpost should be allowed to handle this case has been raised, as its defined mandate was to work towards legalization of outposts established with the support of the government. The High Court determined that the State must now update it regarding its involvement in the construction within 7 days. The High Court’s decision will follow the State’s update.