As published May 9th in Haaretz following Peace Now's investigation, construction of a huge structure referred to as the “Amana House” has recently started in Sheikh Jarrah in East Jerusalem. The structure is intended to serve as an office building for the Amana association - a private entity operating toward establishing and expanding settlements and responsible for many of the illegal outposts in the Territories. The structure is being built within the Palestinian neighborhood  of Sheikh Jarrah, and is adjacent to St. Joseph Hospital, which serves the Palestinian population of Jerusalem and the West bank.

Construction of the settlement is supported by a wide array of governmental institutions, headed by the Israel Land Authority (ILA). The ILA, in an illegal and misleading procedure and without a tender, expropriated private Palestinian land and handed it over to Amana, a right-wing, pro-settler organization that is politically and ideologically affiliated with the right-wing government.

Peace Now: “Amana has mastered the art of illegal construction on stolen land in the West Bank and it is not surprising to see it doing the same in East Jerusalem. The government must stop doing the “dirty work” of taking over Private private land for Amana, and must halt Amana’s construction that will make it harder to get to a compromise in Jerusalem." 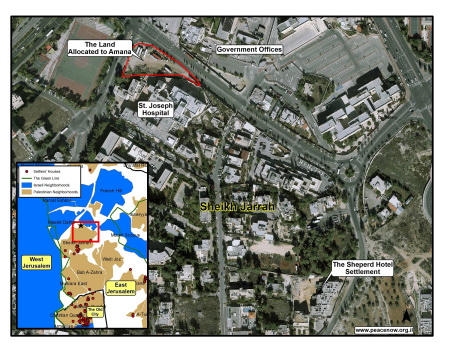 The story of the Amana House started in 1992 when the ILA decided to allocate the 3 dunams in Sheikh Jarrah to Amana for planning, based on Amana's commitment to move their offices to Jerusalem (although in fact the offices of Amana were already in Jerusalem). While the land was included in 1968 in a map of some 4,000 dunams that the government planned to confiscate, these specific 3 dunams were never legally expropriated. In 1998, the construction plan made by Amana was approved based on a questionable signature by the ILA. In 2009 the then Minister of Finance, Yuval Steinitz, signed an announcement of confiscation for public interest of a new artificial parcel that was prepared by the ILA in order to "launder" the confiscation of the land for Amana. An appeal by the Palestinian owners of the land, demanding to cancel the construction permit granted to Amana, is now pending in the Israeli Supreme Court.

It is important to note that two of the leaders of Amana were recently questioned for allegedly taking kickbacks from a settlement development firm. It is also important to mention that the Amana association owns the “Al Watan” company, subject of a police investigation on extensively fraudulent practices in land transactions in the Territories.