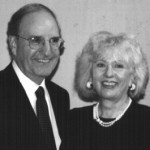 Americans for Peace Now (APN) mourns the passing of Elaine Hoffman, a longtime senior member of its Board of Directors, a staunch advocate for peace for Israel, a devoted leader of Los Angeles' Jewish community, and a longtime political activist. (Picture: Elaine with Senator George Mitchell at the APN Yitzhak Rabin Peace Award Event).

APN's President and CEO Debra DeLee said: "The APN family lost an important member. We all admired Elaine and were inspired by her commitment to public life, to our community and to a peaceful, progressive Israel.

"Like many of us, Elaine's strong commitment to peace for Israel was forged during the peace negotiations between Israel's Menachem Begin and Egypt's Anwar Sadat under the mediation of President Jimmy Carter. Elaine was then the Finance Director of the Democratic National Committee in Washington, DC. While working in the Carter White House, she was asked to arrange some of the White House activities related to the signing of the Israel-Egypt peace accord, and was recognized for her outstanding work with an invitation to visit Egypt as a guest of Egypt's First Lady Jehan Sadat as part of a small group that toured Egypt.

"Elaine remained committed to the cause of Arab-Israeli peace, and worked for this cause through several leadership roles at APN. She closely followed Israeli and Palestinian politics, and in 1996 was a member of a United States delegation that monitored the first elections for the Palestinian Authority in the West Bank, Gaza Strip and East Jerusalem.

"I had the honor of working with Elaine and learning from her during her longtime service on the National Board of Directors of APN. She was our Treasurer and the co-Chair of APN's LA-based Western Region. Leveraging her creativity, resourcefulness and her experience in public life, Elaine helped shape the direction of Americans for Peace Now, and had a great part in our success both nationally and in Southern California. In 2005, in recognition of her invaluable contribution, APN awarded Elaine with our Yitzhak Rabin Peace Award.

"Our friend Elaine Hoffman will be sorely missed. We send our condolences to her family and friends, particularly to members of our Western Region. Her memory will be a blessing to us all."