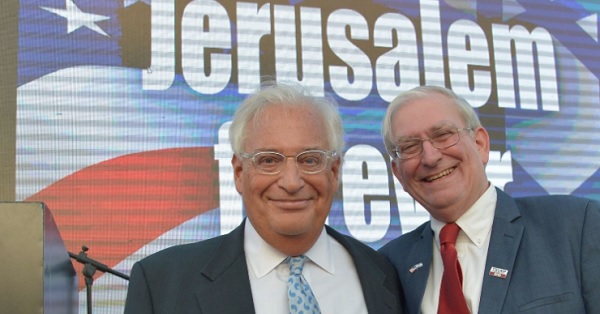 If yesterday’s comments by US Ambassador to Israel David Friedman were bad, today’s are even worse. When we heard yesterday’s comments, based on a snippet of his televised interview with Israel’s Walla News, we issued a statement calling on President Trump to fire him.

Yesterday’s snippet released by Walla focused on Friedman’s absurd assertions that West Bank settlements are “a part of Israel” and that Israel is only occupying two percent of the West Bank.

Today’s comments, coming from the full, 14-minute interview with Friedman, are in some ways even more alarming, because they seem to suggest that Friedman is confused not only about the facts but also about his role as ambassador.

Consider this: At some point, Walla interviewer Yaakov Eylon asks Friedman what the term “two-state solution” means to him. Instead of stating what the long-held US position on this is “two states, Israel and Palestine, living side by side in peace and security” or some other formulation along this line, Friedman hems and haws, and then says: “I’m not sure. To me, I’m not focusing on the labels. I’m focusing on the solutions.” This, despite the fact that the long-held policy of the United States, which he represents, has endorsed a solution, the two-state solution, and had made it one of its chief foreign policy goals.

Or consider how Friedman answers a question about his credibility among Palestinian leaders, given his long record of support for West Bank settlements and for positions associated with Israel’s extremist nationalistic right wing. You’d expect a US ambassador to Israel, who is a member of the US team trying to relaunch Israeli-Palestinian negotiations to say something like: “The Palestinians are familiar with my views, but my personal views are now irrelevant because I represent the United States of America, and America’s role in advancing Israeli-Palestinian peace efforts is to facilitate, broker, mediate.” Something along these lines, right?

Here is how Friedman answered the question: “They (the Palestinians) understand my views. I don’t think it’s a matter of being suspicious. I think they have dealt with people who have those views before. And there are disagreements between us, obviously, but if there weren’t disagreements then what would be the point of negotiating and meeting and sitting and talking? I mean, you don’t need to sit and talk to people that you agree with. I think those disagreements, while they are significant, they are not impediments to negotiations.”

What Friedman is saying here is that the Palestinians are negotiating with him, representing a position that is significantly different from theirs. What’s wrong with this assertion?  Well, first, the negotiations are taking place between the Palestinians and the Israelis. American diplomats are supposed to serve only as facilitators. And second, his extremist pro-settlement positions are not those of the United States government.

So, who does Friedman represent when he meets and sits and talks with Palestinians to iron out disagreements? Is it the US government? The President? Is it himself or is it people in Israel and the United States who hold his extremist positions?

There’s no way around it. Friedman’s got to go and let someone else represent the United States in this sensitive and vital post.