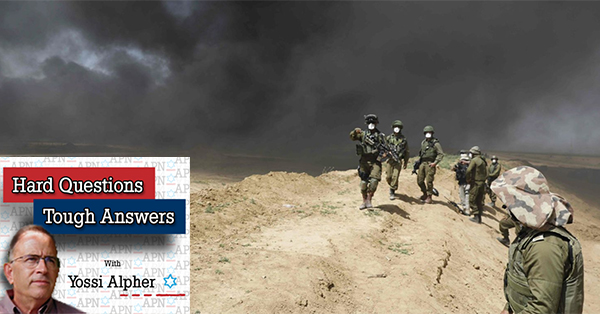 This week, Alpher discusses what the leaders of the mass Gaza demonstrations at the fence hope to achieve; why there are so many dead and wounded demonstrators; a prognosis; how developments in Syria affect Israel; and Honduras.

Q. With 30 Gazans dead already, what do the leaders of the mass Gaza demonstrations at the fence hope to achieve?

A. The genesis of the repeated Friday demonstrations at the Gaza boundary fence is “popular” in the sense that it began with non-affiliated Gaza youth working social media rather than Hamas. By now, Hamas has taken over the movement. But these two actors do not necessarily have the same objectives.

The overall goals of the original demonstrators appear to be drawing world attention to the Gaza Strip’s economic plight and to the Israeli blockade, along with an emphasis on the theme of “return” as we approach the seventieth anniversary of the events of 1948. Note that more than half the residents of Gaza are descendants of the 1948 refugees. There is also a “nonviolent” theme, though in Palestinian parlance nonviolence condones stone throwing and Molotov cocktails.

Hamas infiltrated and commandeered the demonstrations from the outset, sending its own fighters to the front lines, here and there with weapons and explosives. This explains why the majority of those killed thus far by Israeli sharpshooters have been identified as belonging to the Hamas military wing.

Hamas’s organizational objectives are different from those of the mass of civilian demonstrators insofar as they reflect the movement’s dilemmas. Hamas is unable to provide economic solutions for Gaza. It refuses to give up its arms in favor of a Palestinian Authority return to power, it fears another all-out clash with Israel and it is increasingly isolated from the main Arab players, Saudi Arabia and Egypt. Its attitude toward Israel was conveniently displayed in a swastika adorning a Palestinian flag at the demonstrations.

Consequently, driving the Friday demonstrations and clashes with a manageable level of violence appears for Hamas to be a convenient means of controlling and distracting the two-million-strong Gaza public. Managing that level of violence has to continue at least through the planned mid-May climax of this campaign, when Palestinians observe 70 years to the 1948 defeat and exile, the US inaugurates an embassy in Jerusalem, and Ramadan begins.

This is hardly a strategy. Hamas has no really viable strategy. But then again, when it comes to the Gaza Strip, neither does Israel.

Q. Still, why so many dead and wounded demonstrators?

A. In planning its response to the mass demonstrations, the IDF’s primary concern has been with the prospect of hundreds or even thousands of Gazans breaking through the boundary fence--which defines an internationally recognized border--and overrunning an Israeli border kibbutz, ostensibly in the name of “return” but in fact with the aim of killing Israelis. The outcome would have been large numbers of dead Palestinians and almost inevitable escalation into a new mini-war involving Hamas rocket fire at Israeli cities and an Israeli land invasion.

Accordingly, the first round of conflict on Friday March 30 (Pesach eve, Good Friday and Israel Arab Land Day, all wrapped into one) appeared to call for a major deterrent blow by Israel. Hence we witnessed the most Palestinian casualties thus far.

This seemed to have one desired effect: the next Friday, April 6, witnessed a reduction by about 50 percent of the size of the crowd of demonstrators, down to about 20,000. From the standpoint of the IDF, the techniques it devised for limiting the scope of friction and conflict have succeeded. Even the percentage of unintentional deaths appears to be logical given the dimensions of the confrontation. Note that a senior PA Islamic affairs official, Mahmoud al-Habbash, accused Hamas last Friday of deliberately sending civilians to “go and die so that we’ll go to the TV and media with strong declarations”.

But in terms of international opinion, the mounting death toll is hard for Israel to explain, particularly when it includes a Palestinian journalist clearly designated as “press” who was shot far from the fence, along with a number of non-Hamas civilians. Given the advance notice Hamas provided, the Israel Defense Forces had plenty of time to try to devise less lethal means of keeping the crowd away from the fence. On Sunday the IDF announced a serious investigation of the legality of the casualties it has inflicted. Meanwhile a lot of Israeli forces will remain pinned down in the Gaza arena for at least another month.

A. Something is bound to go seriously wrong for one or both sides on this front. Stay tuned.

Q. Meanwhile on another front, Syria, there are dynamic developments. How do they affect Israel?

A. Last week, President Trump declared he wanted to withdraw the 2000 or so American troops currently stationed in Syria “very soon” and cancel some $200 million in relief aid to the country. Most of those troops are supporting a moderate Syrian Kurdish-Arab force in northern Syria that is increasingly confronted by a Turkish military campaign against Syria’s Kurds. US generals say they are still committed to ridding eastern Syria of remnants of ISIS, but the president’s heart is clearly not in this campaign.

So the US is lowering its profile in Syria, an issue that so worries Israel that it was reportedly prominent on the agenda of a recent Trump-Netanyahu phone conversation. In parallel--and equaling worrisome for Jerusalem--the leaders of Russia, Turkey and Iran met last week in Ankara to discuss Syria’s future. All three--Putin, Erdogan and Rouhani--are far more significant stakeholders in Syria than Trump. And they are able to talk and coordinate their actions in the country despite their distinctly differing priorities there.

Turkey wants to weaken its own Kurds and those in Syria, who are affiliated. Iran wants to ensure survival of the Assad regime and facilitate the demographic restructuring of Syria by keeping millions of Sunni refugees from returning and possibly replacing them with Shiites. And Russia wants to consolidate its old-new strategic foothold on the eastern shores of the Mediterranean. Russia also seeks to consolidate its strategic relationship with Turkey at the expense of Turkey’s membership in NATO.

Israel identifies with none of these strategic objectives. It views with particular concern the Iranian buildup in Syria. As matters stand, it can hold out very little hope that the Trump administration will do anything about it. Nor can Israel be pleased with Trump’s apparent readiness to abandon Syria’s Kurds in order both to appease Turkey and to reduce the US Middle East profile.

Last weekend witnessed yet another horrific Assad regime chemical attack on Syrian civilians. At the time of writing, Trump was huffing and puffing about it but doing nothing. Indeed, his pledge to get out of Syria probably encouraged Assad’s use of chemical weapons again. And Russia was denying the attack while sharply warning Washington of very serious consequences if it took punitive action.

While Russia-US tensions are generally on the rise on a number of fronts, Syria does not appear to be the arena where they will clash. Moscow took pains to point out that a Sunday night air attack on an Iranian base near Homs was carried out by Israeli aircraft, meaning it was “routine”, and did not constitute American reprisal for the chemical attack.

Russia’s “outing” of Israel’s attack role in Syria is unusual. Moscow claims it was not notified in advance by Israel. If this presages a more aggressive Russian attitude toward Israel’s Syria concerns, this could be worrisome.

Q. Summing up Gaza and Syria?

A. For Israel, Gaza is perhaps the more urgent front, but Syria the more important. Further, regarding Gaza Israel has no viable strategy other than periodically “mowing the lawn” to restore the deteriorating status quo. Nor does the rest of the Middle East particularly care--about the Palestinians in general and Gaza in particular.

In contrast, regarding Syria, Israel has a clear strategy of keeping Iran as far away as possible while coexisting with Russia. Were Israel to clash with either, the ramifications would be global, not regional.

Q. That leaves Honduras. Where does it fit in?

A. Israel’s invitation to the president of Honduras, Juan Orlando Hernandez, to light one of twelve torches at the ceremony marking Israel’s seventieth Independence Day can only be understood as perhaps the most ludicrous manifestation of the overall dysfunction and corruption of the Netanyahu government.

A non-Israeli has never been invited to light an Independence Day torch. Hernandez presides over a corrupt and very violent country with a huge unemployment rate. He is accused of falsifying the outcome of his recent reelection. There is no Israeli ambassador resident in Honduras. The country did not even vote for Israeli independence 70 years ago in the United Nations; it abstained.

So why invite him? The official explanation is that, because he is a graduate of an Israel Foreign Ministry leadership seminar more than 25 years ago, it is fitting that Hernandez light the Foreign Ministry torch as a tribute to Israel’s drive “to make the entire world better. Increasing the good in the world is the goal of our country.”

Another explanation is that, by inviting a foreign head of state to light a torch, PM Netanyahu now has an excuse in terms of protocol to do so as well and to say a few words at the ceremony. This is a job he has been angling for despite the fact that traditionally and according to protocol there is no room for the prime minister in this particular ceremony. Netanyahu obviously hopes that Independence Day smoke and mirrors will burnish an image seriously tarnished by ongoing corruption investigations.

But the best explanation is simply that Minister of Culture Miri Regev is in charge of planning the seventieth anniversary celebrations. The above “Tikkun Olam” quote is hers. Now there’s a viable grand strategy for Israel!

In terms of vulgarity and generally crass and unacceptable rhetoric and behavior, no one in Netanyahu’s government can outdo Regev. In this sense, inviting the president of Honduras to light a torch is about as Israeli as we can get on our seventieth anniversary.