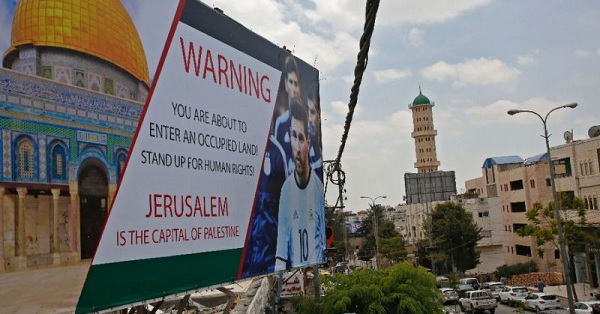 When you think about the Israeli-Palestinian conflict, the first thing that comes to mind usually isn’t soccer. But this week, a soccer game in Israel became a highly symbolic political pawn used by the Palestinians, and specifically the Boycott, Divestment, and Sanctions (BDS) movement, against Israel.

The match, scheduled for Saturday in Jerusalem, was intended to be a “friendly” warm-up game between the Argentine and Israeli national teams before the World Cup next week. Palestine Football Association chief Jibril Rajoub pressured Argentina to back out of the match, even going so far as to encourage Palestinians to “burn their Messi [jerseys] and pictures and renounce him.” In the wake of this encouragement, Argentine soccer players, especially Messi, received numerous threats, leading the team to pull out of the match citing concerns about safety.

BDS activists are lavishing Argentina with praise, thanking the country for refusing to “sports-wash” Israeli “apartheid.” While they think that they changed Argentinians’ minds about Israel as a whole, they have simply made soccer players fear for their safety, encouraged Israeli isolationism and right-wing extremism, and entrenched the zero-sum model of interaction with Israel. By isolating Israel from the international community, this move encourages the right-wing narrative in Israel that the whole world is against them. This paranoid narrative gives carte blanche to the government to withdraw Israel from international norms, pressures, and agreements and to continue to fund and support the occupation of the West Bank, thereby bringing Israel closer to being a pariah state. While Israel needs to be pressured to rejoin the peace process, isolating Israel will only stall peace talks Jewish state becomes more insular and angered.

To make things worse, the BDS movement makes relations with Israel a zero-sum game, establishing an all-encompassing “us versus them” paradigm: if you send your soccer players to Israel, then you are encouraging Israeli “apartheid” and the murder of Palestinians; if you don’t, you oppose the existence of Israel and support the BDS movement. And Israel is playing straight into this paradigm. The match was originally set for the multicultural, non-controversial city of Haifa. But Culture Minister Miri Regev moved the match to Jerusalem as part of the celebration of Israel’s 70th year of independence, igniting anger from Palestinians who dispute Israel’s sovereignty over the city. Regev acknowledged the political significance of the location change, exuberantly telling reporters that the match would be a public relations coup and that Messi would “kiss the Western Wall” and “shake hands with Prime Minister Benjamin Netanyahu.”

Clearly the story of this cancelled match is more complex than simply blaming (or praising) BDS. Regev and BDS’ complementary zero-sum paradigms led to a situation in which Argentina playing in Jerusalem became an endorsement of the occupation, or, as BDS would term it, “Israeli apartheid,” and made it necessary for Argentina to withdraw.

Two concrete lessons emerge from this debacle. First and foremost, Israel and the international community need to seriously address the occupation. Beyond lazily labeling the Israeli occupation as “apartheid” and isolating and angering Israel, we can all take steps to push for peace. Argentina could have used its match with Israel as a platform to advocate for peace with the Palestinians, or scheduled a parallel match with the Palestinian national team while there. And Israel itself must acknowledge that it is on the path to becoming a pariah state; while it is easy to point fingers at the Palestinians, Regev, or Argentina, Israelis must consider blaming and addressing the price of their actions in the West Bank or their response to protests in Gaza.

The second lesson is that it is completely unproductive to treat the Israeli-Palestinian conflict as a zero-sum game. Compromises need to be made, trust built, and both sides can “win” victories for their priorities for peace to be achieved. As long as we keep treating the conflict like a zero-sum game, one side will necessarily have to lose or withdraw, and it might just be Israel if it continues on its current path of occupation and isolation.

PeaceCast: Arab Citizens on Israel's National Soccer Team
Legislative Round-up: May 28, 2021
Matching Donation Grant Still Active - "This Is Not A Moment, It's The Movement" - Letter from new APN President and CEO
May 18, 2015 - Will Israel's new government survive, whither the peace process, reassurance on Iran, and more
APN and Fellow Jewish Organizations Send Letter to Minister Erdan on Airbnb
Legislative Round-Up: January 14, 2021